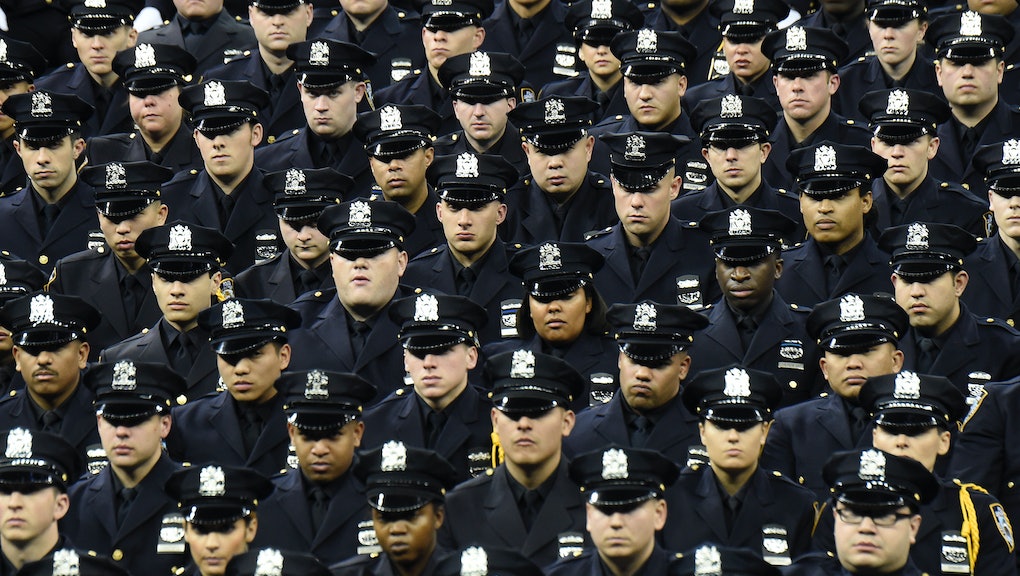 Police Commissioner William Bratton told CBS and NBC on Sunday that he disapproved of the controversial memorial service protest, which he seemed to suggest had caught him by surprise.

"To bring politics or to bring issues into that event, I think, was very inappropriate," Bratton said. "I do not support it."

But political leaders cannot regulate where and when political action happens, just as they cannot use ignorance, willful or otherwise, to separate themselves from its consequences. The petulant charade outside the Christ Tabernacle Church in Queens this past weekend cast an ugly shadow over the anguish at the altar and in the pews.

Rather than honoring the "better angels" prevailing inside the church — and a bereaved family who chose to welcome the city and country's civilian leadership — the scores of officers watching on big screens outside used the occasion to make a political statement. That's their right, just as the resulting images of this nasty, brutish and short-sighted element in the force rallying against a mayor they have reviled since before he took office is now their legacy.

Make no mistake, the protest had little to do with the brutal killings of two NYPD officers a week earlier. Civilian leaders and rank-and-file police have been at odds for decades. The harshest and most irresponsible attacks on City Hall after the deaths of Ramos and Liu came, predictably, from union leaders.

The head of the Patrolmen's Benevolent Association, Pat Lynch, who will soon be up for re-election, was among the first to say that de Blasio had "blood on his hands" after the deadly attack. The Sergeants' Benevolent Association followed right along, tweeting that "the blood of 2 executed police officers is on the hands of Mayor de Blasio." Neither association was part of the wide-ranging labor deal struck by de Blasio and eight uniformed unions in early December.

That, much more than anything the mayor said about what he tells his biracial son about how to behave around cops, is why we're here today. And Bratton, in his whiplash-inducing series of performances Sunday, basically said as much.

"The issues go far beyond race relations in this city," he told NBC. "They involve labor contracts. They involve a lot of history in the city that's really different from some of what's going on in the country as a whole. ... This isn't just about policing. This is about larger issues. We're the tip of the iceberg."

The suggestion that Bratton did not know what his officers might do Saturday is either desperately naïve or deeply cynical. By allowing them to go forward with it, then talking out of the other side of his mouth the next morning, Bratton was seeking to keep his two most important constituencies — City Hall and police union leaders — in line.

"[De Blasio] is the mayor of New York. He is there representing the citizens of New York to express their remorse any their regret at that death," Bratton said on CBS, spelling out why he was now saying the back-turning was inappropriate. But whatever substantial point he was flirting with, the die had already been cast. In waiting until after the funeral to deliver the message, Bratton only managed to underline the his own failure. The awkward pivot to NYPD grievances over pay was particularly tone-deaf.

How did we get here? Fourteen months ago, the people of New York City went to the polls and voted de Blasio into office by an overwhelming margin. The Democrat won more than 73% of the vote  — 54.8% in "white areas," 90.1% in "Hispanic areas" and 96.3% in "black areas," according to a New York Times breakdown — after his long-shot campaign pulled away from a deeply flawed Republican opponent.

Like the more liberal Democrats in the field during the mayoral primary, de Blasio promised to put new constraints on the NYPD's unconstitutional "stop and frisk" policy. The controversial tactic allows officers to claim only a "reasonable suspicion" as justification for briefly detaining and searching anyone they please. Blacks and Latinos were targeted at a wildly disproportionate rate. You'd have a hard time finding a white person in Manhattan or gentrified Brooklyn who's seen a stop, let alone experienced one.

The NYPD did not take this well. They don't take any kind of criticism, real or imagined, with any kind of grace. Former Mayor Rudy Giuliani — a former federal prosecutor and relentless defender of the force — came in for similar treatment during his time in office when union leaders were indicted on a slew of corruption charges. But this time around, the stakes are higher.

Now what? The targeting killings of Ramos and Liu — "peace officers," as Vice President Joe Biden said during the Ramos service — were, no matter the gunman's mental state, a political act. Their murders were an assault on the peace of New York City.

The response from police union leaders, suggesting repeatedly that the mayor had inspired or enabled the killer, then trying to score some kind of cheap political revenge with a protest at an event they had declared off limits to protesters, is evidence of a deeper rot than many had previously feared. Led by an incompetent or insubordinate commissioner, there's no reason to believe the worst isn't still to come.