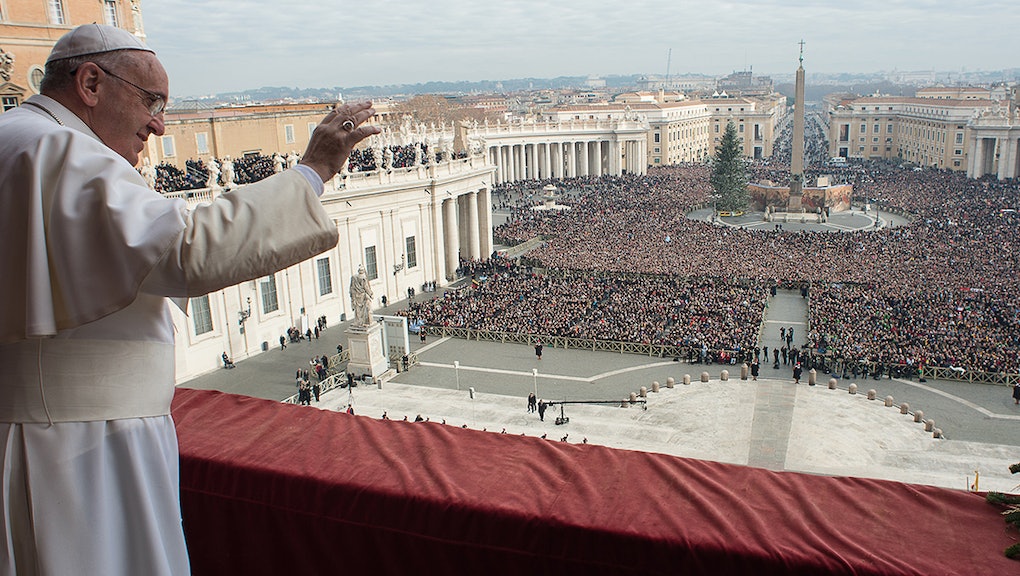 One of the world's most important spiritual leaders has a message for the world.

The Guardian reports that Pope Francis has a hefty New Year's resolution: organize a massive push by the Catholic Church to fight climate change.

The pontiff will apparently "issue a lengthy message on the subject to the world's 1.2 billion Catholics, give an address to the U.N. General Assembly and call a summit of the world's main religions" in an effort to unify the religious community against climate change.

The plan: Pontifical Academy of Sciences chancellor Bishop Marcelo Sorondo told the Guardian that the pope wants to influence the course of the 2015 U.N. climate meeting in Paris, the culmination of 20 years of emissions negotiations.

"Our academics supported the pope's initiative to influence next year's crucial decisions," the Guardian reports Sorondo telling the Catholic development agency Cafod. "The idea is to convene a meeting with leaders of the main religions to make all people aware of the state of our climate and the tragedy of social exclusion."

The church is taking important steps: The pope has spoken extensively on climate change before, saying humans have a responsibility not to destroy God's creations for future generations.

"Safeguard creation," he told a crowd in Rome in May. "Because if we destroy creation, creation will destroy us!" Around the same time, the Vatican hosted a large-scale summit on sustainability that drew connections between unsustainable environmental practices and economic injustice.

Sorondo himself previously urged Catholics to begin paying attention to climate change, forwarding Catholic Online a paper citing "growing concern that such human-influenced changes to the Earth's climate could have negative effects on human societies and on the Earth's ecosystems and therefore that these changes should be avoided or slowed."

A real position: The Atlantic's Tara Isabella Burton argues that Francis' environmental advocacy isn't just a glib statement on a fashionable issue; instead, he's using "his pulpit to actively shape public discourse about the nature of creation" and linking the prevention of climate change to a "profoundly optimistic vision of what it means to be human."

On climate change, the Vatican is in sync with the scientific community. Virtually every working climate scientist believes that global warming exists and is caused by human activity. Earlier this year, a major U.N. report written by 772 scientists concluded that immediate action of the kind the pope will be proposing is desperately needed: "Observed impacts of climate change are widespread and consequential ... today's choices are going to significantly affect the risk that climate change will pose for the rest of the century."

While the pope is just one man, he's the head of a faith with 1.2 billion followers, and he seems determined to get other religions onboard the anti-climate-change train as well, which could have a big impact. It's great news that the Vatican is using its power to address the ongoing threat of climate change, which is ravaging the world and will only get worse without immediate action. Cool pope, indeed.