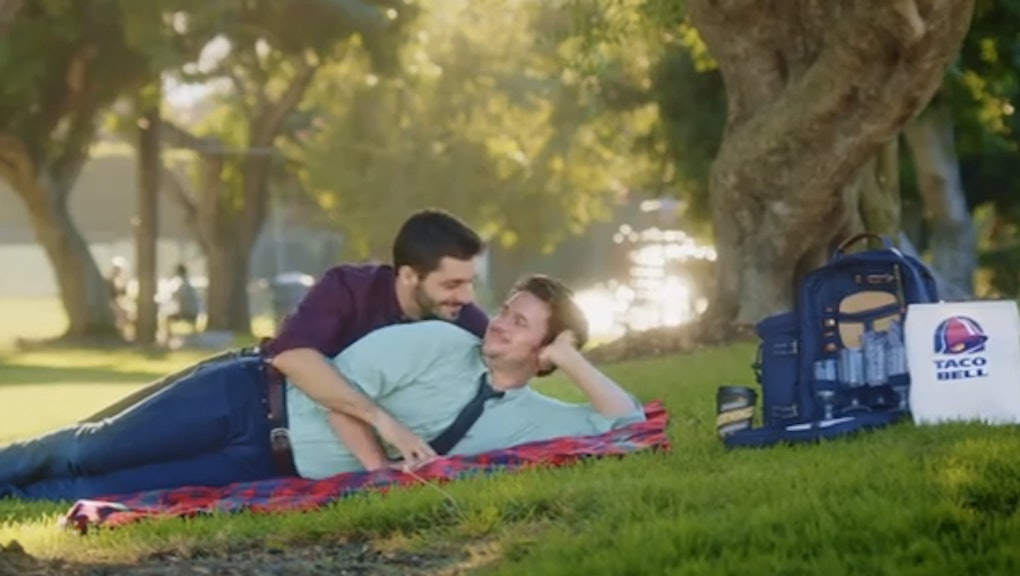 An unauthorized Taco Bell commercial featuring what appeared to be a gay couple made headlines earlier this month when it was "leaked" on YouTube. The problem? It wasn't made by Taco Bell.

That could have been the end of the story, but in a happy twist, Taco Bell has put out a statement saying it loved the fake ad spot and would like to talk to whoever made it.

"Leaked Gay Taco Bell Commercial" first hit YouTube in the middle of December and went viral. It features two men consuming Taco Bell's breakfast, which inspired them to think of all the other awesome activities they could "fit in" before work, from snuggling in a park and getting married to unearthing buried treasure and riding personal watercrafts.

The plug's high-quality production value prompted many to wonder whether the commercial was legitimate. The mystery was put to bed Sunday, when Taco Bell issued a statement to Mediaite, denying its involvement but praising the video nonetheless:

"We didn't create this ad, but we can see the people who did share the same Live Mas passion for our brand—and our breakfast — as we do. Although we cannot condone unauthorized use of our intellectual property, we are impressed with their work and would be open to meeting with them."

LGBT-friendly marketing is on the rise. And for good reason. The LGBT population represents a large slice of the American marketing pie, and as such, companies are recognizing the importance of tailoring ad content to it. According to Witeck Communications, a strategic communications firm specializing in LGBT communities, the purchasing power for American LGBT consumers was projected to be $830 billion in 2013 alone. Harris Interactive, another market research firm, reports that it's also a population with strong brand loyalty, especially when it comes to companies perceived as specifically LGBT-friendly.

The takeaway? Taco Bell would be wise to run this commercial, or one like it. Several other large brands, including Cheerios, DirecTV, Tylenol and Honey Maid, have recently produced similar ads featuring gay and lesbian couples and parents. And while these companies may be appealing to the economic sensibility of the LGBT community, it's not just about money — it's about reflecting reality too.

As the "traditional" American family continues to evolve, and Americans become increasingly accepting of LGBT individuals, it's clear that our definition of family is shifting. As Mic's Derrick Clifton wrote, "There's no right or wrong way to have a family — and that's being represented much more in the images we see and the media we consume."

So let's get on board, Taco Bell.