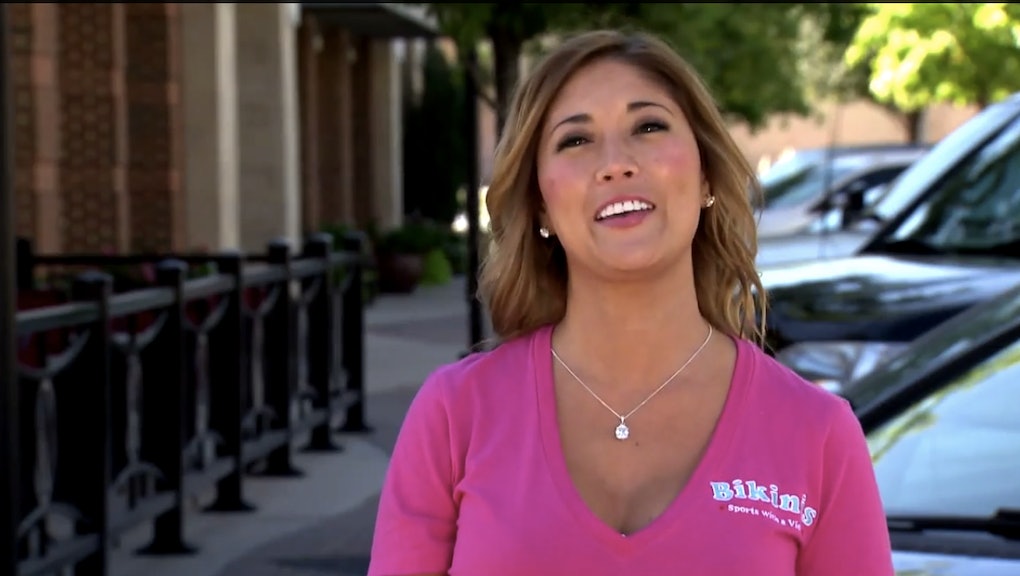 Should a "breastaurant" employee be fired for refusing to wear the requisite bikini top uniform on camera?

This is the debate currently unfolding on social media after Sunday night's CBS episode of Undercover Boss. At the center of the controversy is Doug Guller, founder and CEO of Bikinis Sports Bar & Grill, the man who has actually trademarked "breastaurant" and is facing backlash for a variety of unconventional business practices that came to light during the episode. Commenters seem particularly irritated by Guller's decision to fire one employee, Jessica, for refusing to wear her bikini top uniform on camera while at the same time offering another employee a breast augmentation bonus if she "works harder" over the next six months.

Whether or not the firing was lawful, the episode's biggest reveal was the extent to which overt sexism continues to goes hand-in-hand with capitalism. Guller's misogynistic business strategy isn't just evident in the dress code; objectification of women's breasts is the very foundation of his entire business model, from his advertising plan to the employee incentives for doing a good job.

Because who needs health insurance if they have great breasts, right?

Boobs and bar food: Boobs, historically fetishized, have long been used to market American grill "classics" like the "hot juicy wings" on Bikinis' menu. Indeed, the commercialized objectification of women's bodies — commonly cited as "sex sells" — is nothing new to advertising, especially when it comes to food and beverage. Just take a look at this Arby's ad:

As Lauren Davidson wrote for Mic earlier in the year, fast-food joints in particular have been fond of metaphorically suggestive advertising that places meat next to women's mouths and bodies. The double entendre intended by these ads is pretty clear.

This is much about much more than a bikini top. Perhaps people have been so upset by this most recent Undercover Boss episode because it's a reminder that while the tactics from Hooters and Carl's Jr. have slipped below the radar, the attitudes that supported them have not gone away. Indeed, Jessica's firing highlights just how poorly women are treated in the industry. In her case, as is the case for other women who are servers or bartenders, her worth is equal that to her exposed body. This is why Guller's female employees are incentivized in ways that further expose and sexualize their bodies — through boob jobs. No wonder the restaurant industry, Jezebel reports, is "the largest source of sexual harassment claims."

To add insult to injury, female servers make "68% of what male servers make" as of 2012 — and this figure drops to 60% for black female servers. This gender wage gap not only tells women they are less valuable then men, it emphasizes that their worth — in terms of compensation, tips and other "incentives" — is equal to that of their bodies and, in the case of Guller and the boob job, only quantifiable in terms of the body.

This objectification and sale of women — their bodies literally being quantified by dollar signs — is most egregious.