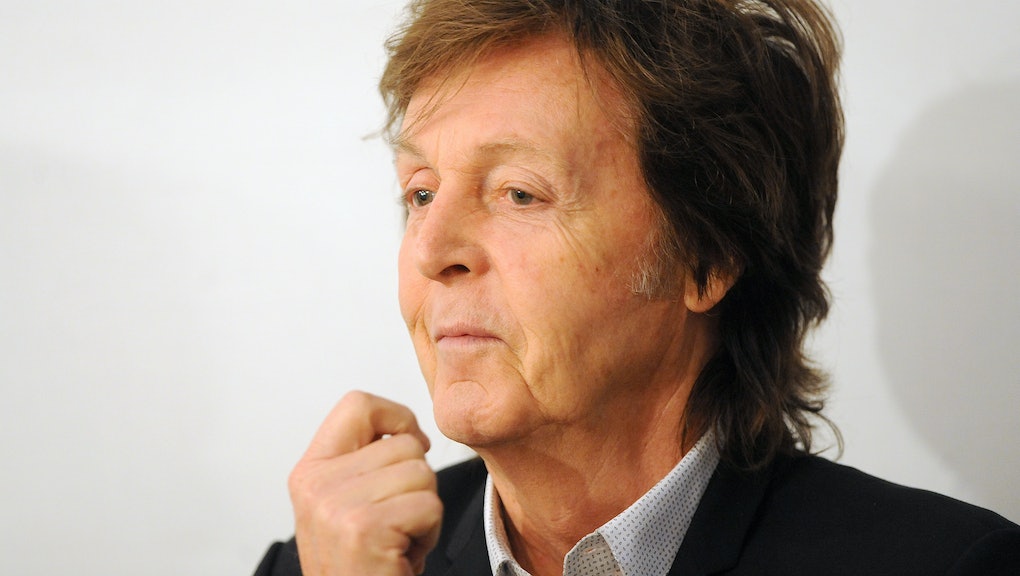 Sir Paul McCartney has still not gotten used to seeing his names in the history books. Even after 50-plus years of writing genre-defying music, the Liverpool legend thinks it's "ridiculous" that people in today's premier universities study his music in class.

"It's ridiculous, and yet very flattering," he said in a candid interview organized by PaulMcCartney.com and Impossible.com, "Ridiculous because we never studied anything, we just loved our popular music: Elvis, Chuck Berry, Little Richard, Fats Domino, etc. And it wasn't a case of 'studying' it. I think for us, we'd have felt it would have ruined it to study it."

Burn. A long-running argument in the music world states that once pop music becomes part of a formal curriculum, it essentially dies. In fact, this debate gained attention recently when Harvard University introduced a curriculum of hip-hop classes. McCartney has now resumed the debate and in doing so probably hit quite a few pop music majors right where it hurts — in their diplomas.

But McCartney didn't stop there. He took his critique of the music education system a step further, adding that one cannot become a better musician by "studying" music in a formal sense.

"It may be that you use it to teach other people about the history, that's all valuable," he said. "But to think that you can go to a college and come out like Bob Dylan? Someone like Bob Dylan, you can't make."

Science backs McCartney. In a recent study, researchers from the Karolinska Institute in Sweden concluded that in many cases musical study or practice has little impact on people's basic musical abilities like recognizing subtle pitch, melody and rhythmic changes. Musical ability, the study found, has a huge genetic component. And if someone doesn't have the right cognitive gear, they'll never be a McCartney or a Lennon, no matter how much they study.

However, the study's authors say natural talents do need to be nurtured. In his interview, McCartney acknowledged this as well. None of the Beatles ever learned to read or write music, but "our study was listening," McCartney said. By steeping himself in music, he was able to draw out all that he needed to write some of our culture's greatest pop and rock songs.

Additionally, several of pop history's greatest musical minds never studied in a formal sense, including Michael Jackson, Jimi Hendrix, Kanye West, composer Danny Elfman and Rage Against the Machine guitarist Tom Morello. None of them learned to read or write music, but they listened and practiced diligently to acquire their musical vocabularies.

Several of them also came up with inventive ways to record their music without relying on formal notation systems. Jackson, for example, recorded all his demos by humming out the instrumental parts he heard in his head. He would then give his demos to studio musicians to re-record later.

But music education is not totally useless. Though he's outwardly disdainful of seeing pop music in higher classrooms, McCartney still funds several musical education programs and once co-founded the Liverpool Institute for Performing Arts. His mission there is to provide exposure.

"We want to train people to be all-rounders," he said. "Give them as much info as we can. But you can't tell them how to become a Bob Dylan or a John Lennon because you know, nobody knows how that happens."

We may never know what's required to create a musical genius, but science shows that music education is still important to young, developing minds. It can help to develop vital cognitive skills that apply far outside of music. As for that extra thing — that passion, that enduring genius that McCartney clearly has — the rest of us may just have to be satisfied with only dreaming about it.