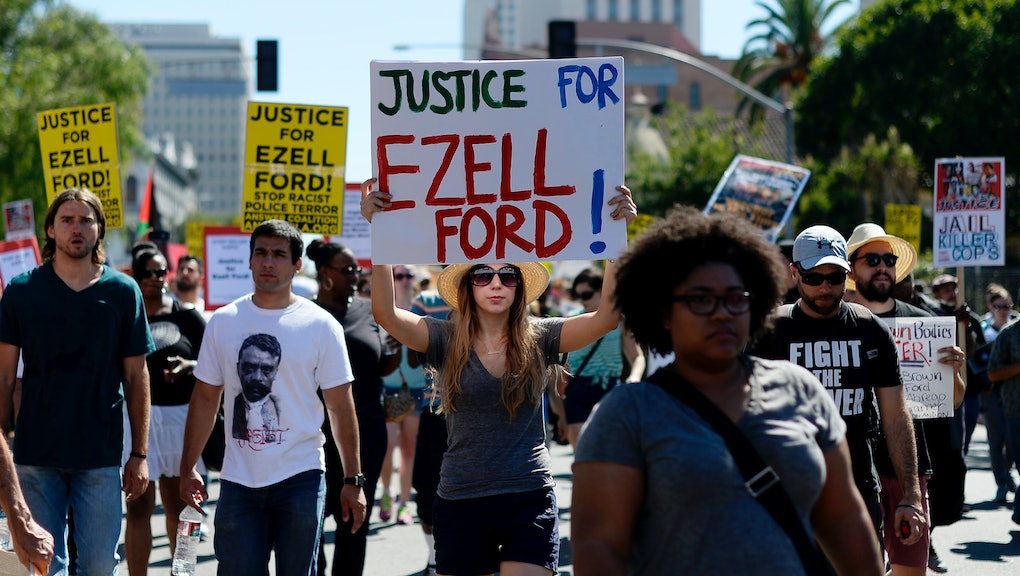 The news: A new autopsy report released by the Los Angeles Police Department Monday in the police shooting of an unarmed black man in August is raising a lot of questions in an already-problematic case of potential police brutality.

When LAPD officers fatally shot 25-year-old unarmed black man Ezell Ford in South Los Angeles on Aug. 11, police claimed that Ford, who had a history of mental illness, had struggled with the officers and tried to steal one of their guns. According to the police, this led to their shooting Ford in self-defense.

But the L.A. Times reports that new autopsy results released on Monday indicate that Ford was shot three times, with individual bullets entering him on his right side, his left arm and his right back. The last had "muzzle imprint," indicating it was shot from close range.

The autopsy results will surely anger anti-police violence activists, who have already highlighted inconsistencies in the officers' stories. A family friend and witness claims that there was no struggle, and the LAPD has failed to clarify just why officers approached Ford in the first place.

Why did the autopsy take so long? The LAPD had previously sealed the records of Ford's autopsy, claiming that the hold was necessary to prevent witness statements being collected by the police from being influenced by media reports.

The L.A. Times reports that "despite repeated public pleas, police officials said investigators had trouble finding people who saw the shooting." LAPD Chief Charlie Beck promised that a full, independent investigation of the actions of the two policemen involved would be forthcoming, but said the results didn't contradict the original explanation.

The response: According to the Associated Press, Ford's family has filed a $75 million claim against the city of Los Angeles and a separate federal civil rights lawsuit. The AP reports that the plaintiffs maintain "the city, LAPD and 10 unnamed superiors or other officers were part of a culture that tolerated civil rights violations, including racial profiling and excessive force against blacks."

Los Angeles Police Protective League president Tyler Izen issued a statement portraying the autopsy results as just "one set of facts among many hundreds being collected and assessed in the ongoing investigation ... As tragic as these situations are, law enforcement officers absolutely have the right to defend their life or the life of another."

Why you should care: Thanks to limited federal data and loose use-of-force reporting requirements for state and local police, it remains unclear just how many unarmed black men authorities kill each year across the United States. A Wall Street Journal investigation revealed that over a five-year period beginning in 2007, FBI data omitted over 550 police killings from 105 of the country's largest police departments alone. Mother Jones has similarly documented that officers are quicker to fire on black suspects than white ones, suggesting a racial bias in who gets fired upon regardless of the circumstances.

Even if the LAPD does come to the conclusion that Ford's death was the department's fault, officers are rarely indicted for on-the-job misconduct. In the meantime, protests over the autopsy results are already commencing outside of LAPD headquarters in downtown Los Angeles.