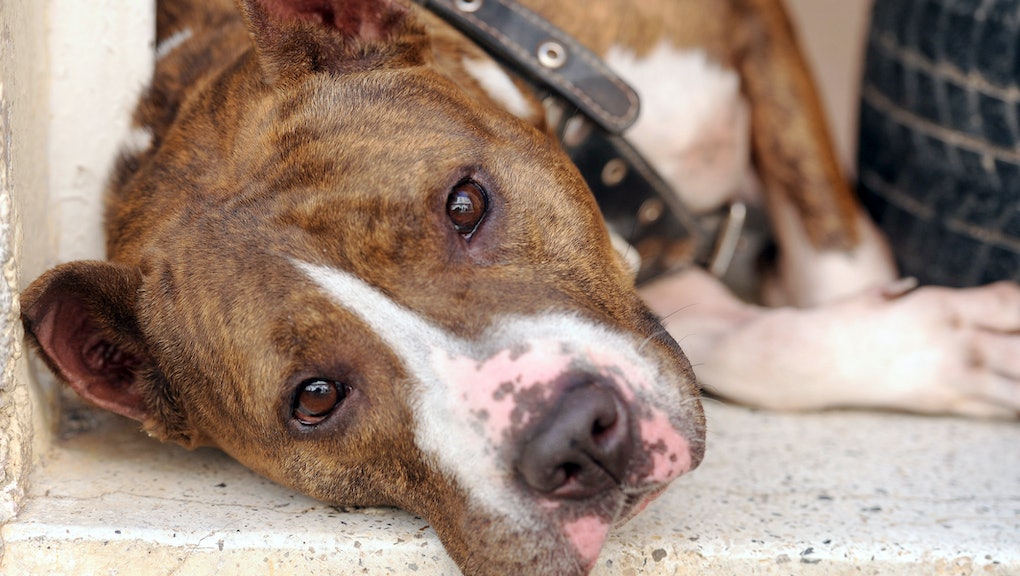 Here's What Everyone Gets Wrong About Pit Bulls

On Christmas Day, Indiana resident Edward Cahill died, reportedly as a result of an attack by his 8-year-old dog, Fat Boy. No one witnessed the attack, but Cahill's wife, Bianca Rodriguez, told investigators she found Cahill's body, splayed on the living room floor and covered in bite marks, and Fat Boy nearby, with blood on his mouth.

And now for the elephant in the room: Fat Boy was a pit bull.

The police report said Fat Boy displayed violent, unpredictable behavior in the past, but Cahill's family denied the statements and described Fat Boy as a loving and well-loved family pet. Something must have gone wrong, Rodriguez said, to provoke the fatal attack. She asked people not to denounce pit bulls based on her personal tragedy.

"I don't want people to think bad of pit bulls," Rodriguez said in an interview. "It was a freak accident. Our dogs, he loved our dogs."

Still, people have responded by piling on the pit bull slander. Make no mistake: Pit bulls are not vicious by nature. But equally hyperbolic claims about pit bulls to the contrary — that pit bulls are actually the sweetest breed around — don't advance the discussion much either. If we get away from broad generalizations and anecdotal stories, we can find something resembling the truth about pit bulls.

And here it is:

We're fast and loose with the "pit bull" label. The American Kennel Club does not recognize the pit bull as an official breed. A number of unofficial, similar-looking breeds in the terrier family, such as the American Staffordshire terrier, and plenty of mutts, get called pit bulls when it's convenient. Imprecise designation of pit bulls skews statistics about dog bites and attacks.

Pit bulls suffer from reporting and media bias. It's hard to get accurate dog bite data because people don't report every incident. But people are more likely to report incidents involving pit bulls (or dogs they call pit bulls) than other breeds.

Additionally, pit bull attacks earn disproportionate media coverage. In 2008, the National Canine Research Council compared media coverage of dog bites by breed over a four-day span. Incidents involving a Labrador mix and other mixed-breed dogs, including one fatal attack, got minimal local coverage. When two pit bulls attacked a woman and her dog, without killing either, however, more than 230 news outlets picked up the story.

Pit bulls are subject to breeding by humans. Pit bulls were originally bred to bait bulls in the 19th century. When the practice was outlawed, some were bred for fighting and others were bred for working and companionship. Today, most pit bulls are a product of random breeding, according to the American Society for the Prevention of Cruelty to Animals.

As dogs go, pits are brawny, but they don't have "lock-jaws" or disproportionately strong bites. (And some owners use supplements and training to make pits look like canine body builders.) They also tend to be exceedingly loyal pets and generally friendly towards people, which speaks to the breed's onetime reputation as a nanny dog.

Some experts say that pit bulls exhibit higher-than-average aggression toward other dogs, though this isn't conclusive. But dog-aggression and human-aggression are entirely separate behaviors. How dogs act toward other dogs does not dictate how they act around people. Pit bulls don't make good guard dogs, as they were never bred to show humans aggression.

Back in the day, we selectively bred dogs to fulfill different roles, e.g., herding sheep or hunting fowl. Today, most dogs are couch-dwelling, belly-rub-seeking companions. Even the original jobs of certain breeds don't reflect why we breed them now. Golden retrievers, for example, some of which are now bred as service dogs, were originally hunting dogs.

Multiple temperament studies have found little to no evidence that certain breeds are more likely than others to bite or kill, including pit bulls and other so-called "bully breeds." The research undermines breed-specific legislation (BSL), which are local laws adopted by about 600 cities in 17 states that ban ownership of bully breeds and mixes of those breeds.

"This study has provided data to indicate the classification of dog breed groups with respect to their inherent temperament, as part of BSL, may lack scientific credibility. Breed stereotyping, like racial profiling, ignores the complex environmental factors that contribute to canine temperament and behavior."

Not only is BSL essentially dog discrimination, it's ineffective to boot. Breed bans, research has revealed, don't contribute to lower biting rates. Even President Barack Obama condemned BSL as "baseless and ineffective" in 2013. But misconceptions continue to run amuck and recent efforts to overturn the bans have failed.

Individual differences matter. It is true that some dogs are, seemingly by nature, more aggressive than other dogs. But, like in humans, temperament varies from dog to dog. Inbreeding can cause behavioral problems including aggression, as can medical issues like hyperthyroidism. Non-neutered male dogs exhibit aggression more often than female and fixed male dogs.

And environment matters most of all. Treatment of dogs affects their behavior more than any other factor, according to research. People who train dogs to be vicious, which constitutes animal cruelty, may end up with vicious pets. At least one study has shown that owners of vicious dogs are more likely to exhibit anti-social personality traits and have a criminal record. And dogs who haven't previously exhibited aggression rarely attack without provocation. The bottom line is this: There are so many more bad owners than bad dogs.

Cahill's death may have been a freak accident, or Fat Boy may have been an aggressive dog. The facts of this sad incident don't change the truth: Pit bulls, as a breed, are just dogs.