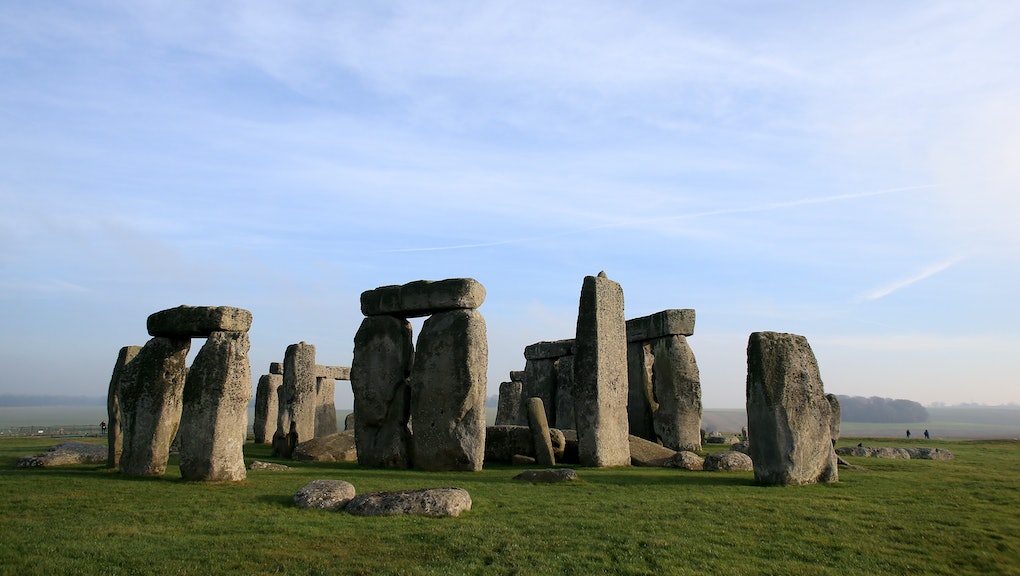 The culture that built Stonehenge might be much older than previously thought.

In research that could "rewrite" long-established British history, University of Buckingham archaeologists have discovered a 6,000-year-old Mesolithic settlement located close to the prehistoric monument of Stonehenge. The discovery of the site, which predates Stonehenge by at least 1,000 years, has massive implications for scholarly understanding of the origins of British civilization.

What they found: History.com reports that the site at Blick Mead is about 1.5 miles from Stonehenge and contains "untouched samples of stone tools, flints and even evidence of possible Mesolithic structures — the only finds of their kind in the Stonehenge World Heritage site." The encampment may be proof that Blick Mead was occupied by humans well before Stonehenge was completed between 3,000 and 1,500 B.C., and that Britain had been settled by people before its land bridge to Europe was submerged under what we now call the English Channel more than 8,000 years ago.

Previously, archaeologists had assumed that the Stonehenge site was unoccupied prior to its construction. But the new dig site contains evidence of feasting in the form of aurochs carcasses, indicating that it might have been a meeting site of special significance for hunter-gatherer tribes. It is also located near a valuable natural spring.

"It's the first proof of people living there earlier, and indicates that Stonehenge could have been planned for years," a project spokesman told the Daily Mail. "It's the first indication of a settlement, not just people passing through and dropping tools."

"British prehistory may have to be rewritten," dig leader David Jacques said in a press release. "This is the latest-dated Mesolithic encampment ever found in the U.K. Blick Mead site connects the early hunter-gatherer groups returning to Britain after the Ice Age to the Stonehenge area all the way through to the Neolithic in the late 5th millennium B.C."

"Blick Mead could explain what archaeologists have been searching for for centuries — an answer to the story of Stonehenge's past," he said.

This has been a big year for Stonehenge: University of Birmingham experts have released other major findings this year, including the results of a sophisticated surveying operation that revealed the Stonehenge site was much bigger than previously understood. Instead of a standalone structure, the findings suggested that the monument was just the centerpiece of a far larger complex involving at least 17 chapels and hundreds of smaller features.

The survey revealed other secrets of Stonehenge, such as the existence of a burial mound constructed at least 4,000 to 5,000 years ago atop the ruins of a gigantic 6,000-year-old wooden "house of the dead." New Scientist's Sumit Paul-Choudhury writes that the hall was "used to store bodies that had been ritualistically defleshed and disassembled."

But there's one major problem: The BBC reports that scheduled tunnel construction to alleviate congestion on the nearby A303 roadway poses the potential to disrupt archaeological study of the site.

"Our only chance to find out about the earliest chapter of Britain's history could be wrecked if the tunnel goes ahead," Jacques said. Some researchers worry that the new tunnel could radically alter the local water table, potentially causing serious damage to a subsurface relics that have been buried for millennia.

"There is nothing to celebrate about a proposal that would inflict at least a mile of massively damaging road building on the surface of our most iconic world heritage site," Friends of the Earth spokesman Mike Birkin told the Guardian. "We have a global duty to safeguard the whole site. The international bodies who hold legal responsibility for world heritage sites have not even been consulted — and there are grave concerns about the damage a short tunnel could cause."

Hopefully, the authorities can work out a plan that preserves Stonehenge and its remaining secrets for future study — because apparently, it still has much to teach us.