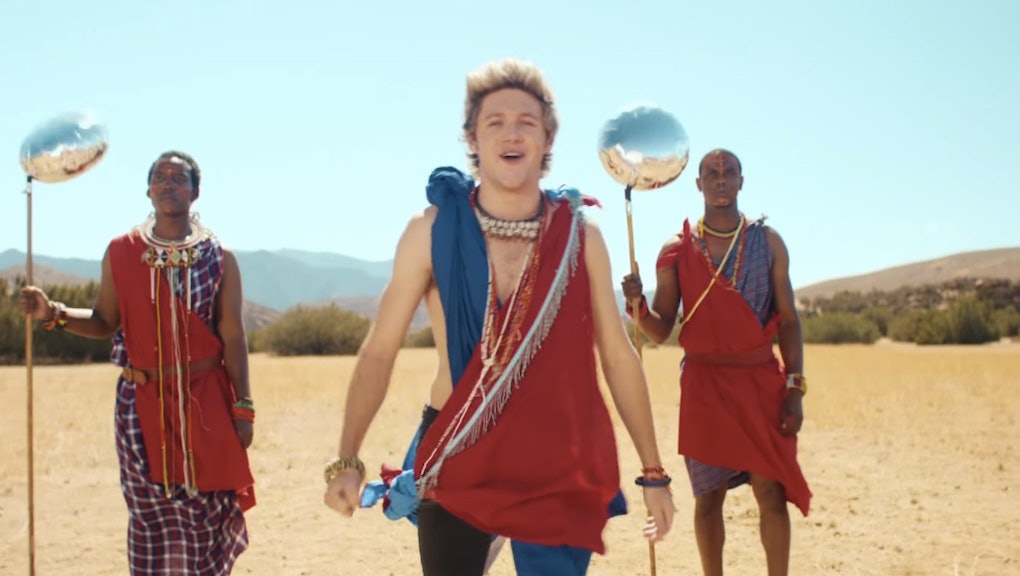 Studies have shown that positive representation is crucial for marginalized groups in our society. For women and people of color especially, the media constantly repackages damaging and repressive stereotypes. In return, media and art are how people our society fight back and find their way to a just truth.

Despite 2014 being a year when #BlackLivesMatter made headlines and black women started campaigns like #YouOKSis to combat street harassment, the music industry remained largely unchanged. In fact, this year was a banner one for the industry's long history of racist, sexist representation.

As 2015 beckons, we have a chance to demand better from entertainers and the music industry. To that end, here are 17 songs and music videos from 2014 that should never have happened — songs and videos of the sort we shouldn't stand for anymore.

Some media outlets have dubbed 2014 "The Year of Taylor Swift," but for black women the video for her lead single "Shake It Off" was yet another occasion when their bodies were used as exotic objects for the white gaze. There's a long and troubling history of the practice, ranging back to when black women like Sarah "Saartjie" Baartman were displayed as part of a freak show.

In the video, Swift not only culturally appropriates from b-boy culture (note the chains), but she also crawls between the legs of a faceless twerking black woman and gawks at her ass, making a spectacle of the black female body in the process.

Eminem's music has been rife with misogyny since his debut, and this past year was no different. In "Vegas" from his latest album, Eminem raps:

In one fell swoop, he endorsed the physical assault of Nicki Minaj and the rape of Iggy Azalea. Azalea responded in the best way possible, noting Eminem's tired sexism and pointing out that he was majorly defaulting on his opportunity to be a role model for young men, including her own little brother.

3. "God Made Girls" by RaeLynn

This was a big year for progressive politics in country music, as the scene started truly embracing LGBT rights. After years of the genre being dominated by the sexist "bro country" trend, artists like Brandy Clark finally got the recognition they deserve.

But it wasn't all better in country. RaeLynn's "God Made Girls" was not only a summer hit, it was blasted out via Clear Channel's "On the Verge" program that requires every company radio station play a chosen song at least 150 times. In this case, the song they chose had a horribly sexist message:

RaeLynn is a woman, but the song reinforces traditional patriarchal gender roles and is trans-exclusionary in its language as well. It's a reminder of just how far country music still has to go.

In the lyrics for "I Won," Future and Kanye West reduce women to sexual objects. The idea is simple: Women are trophies and getting them means you win. That's bad enough, but they didn't stop there.

They released an incredibly sexist video game for "I Won" to go with it. You play as Kanye and Future reclining in beach chairs as faceless women in bikinis walk by. You earn points by throwing gold chains at them. The chains turn the bikini-clad women into glimmering trophies upon impact. In short, you literally objectify women.

Magic!'s debut single "Rude" was one of the biggest hits of the summer, but beneath the cute faux "pop-reggae" beat, the lyrics are troubling to say the least.

It's ostensibly sung to a future-father-in-law who is intent on preventing the lead singer from marrying his daughter. The lead singer is unperturbed, though, which is why he sings "Marry that girl / Marry her anyway" over and over again. It dominated the charts. But it also rendered the woman in question totally invisible, all while reifying patriarchal marriage traditions where a man asks a woman's father for her hand in marriage. This perpetuates the idea that women are property and "possessions to be passed along from original owner to new owner as said owners see fit."

The song may as well be called "Dowry."

6. "Steal My Girl" by One Direction

One Direction made a comeback this year with "Steal My Girl." It was one of their best songs yet, but the video was extremely problematic. It was a litany of cultural appropriation much like Swift's video for "Shake It Off." Niall dances around in a Maasai outfit using several tribe members as "ethnic" props in the video, and Zayn uses Japanese sumo wrestlers in his scene.

The song perpetrates more common offenses, too. It objectifies women and positions them as possessions for their male partners — what else would you steal but a possession?

This ubiquitous summer hit and its accompanying video objectified women and reduced them to their body parts — specifically their asses.

It may have been the 'year of the booty' as some termed it, but some entries in the canon were more progressive than others. Unlike Nicki Minaj's "Anaconda," which is an empowering celebration of female sexuality, "Wiggle" is sexist and objectifies the female body for the pleasure of men. All of this is especially made clear by the last line of the song rapped by Snoop Dogg, "Damn, baby, you got a bright future behind you."

8. "All About That Bass" by Meghan Trainor

"All About That Bass" is not the self-acceptance anthem you might think.

In addition to body shaming skinny women, it masquerades as a song about loving your body all while focusing on what men do or don't like. Feminist anthems like "Anaconda" are revolutionary because they decenter maleness and the male gaze, and "All About That Bass" is really just an ode to maintaining the status quo. Additionally, the racial politics of the song and video are dicey say the least, as Trainor, a white woman, states that she is the one "bringing booty back" as black women stand behind her twerking.

People love to talk about sexism in rap music, but it exists in all genres — perhaps most of all in country music. Jason Aldean's video for "Burnin' It Down" is testament to this. Over the course of the video, the female love interest is paraded around as a sexual object catering to and stripping for a man. Her bare flesh is even shown "sizzling" due to her sexual desirability. In effect, it makes her look like a piece of meat.

Although Aldean may personally reject the "bro country" label, this video goes to show that his music embraces the same sexism and objectification common to that genre.

Korean pop music is increasingly popular across the world, but few people realize that racism is also a big problem in K-pop. Hyuna made a comeback this year with her song "Red," a play off of a Korean nursery rhyme about monkeys and bananas. As such, the video appropriately features monkey, ape and banana imagery galore. Less expectedly, there is an incredibly uncomfortable scene in the middle of the clip where a black man dances "exotically" for the camera, before it cuts back to more bananas and monkeys. It's a play on an outdated and horrible trope that was only ever racist and unacceptable.

Far from being a romantic love song, Nick Jonas's song "Jealous" is an ode to male control of women's bodies and relational abuse. Jonas sings, "I don't like the way he's looking at you," explaining his "right to be hellish," "obsessed" and "protective or possessive" because he feels "jealous."

Analysis of the song has found that it parallels many of the warning signs of intimate partner abuse against women, and is about as far from "romantic" as one can get. Women are not possessions, jealousy is rarely a good thing and it's never anyone's "right" to be cruel.

Despite being a fun, carefree dance-pop song with lyrics devoid of sexist content, the video for Calvin Harris' hit "Summer" defaulted to sexist, objectifying imagery of women for no apparent reason.

Cutting between images of women's body parts and scenes of them gyrating, the video systematically objectifies women and reduces them to their "desirable" parts. The video for "Summer" also had the dubious honor this year of being cited in a report on sexism in the U.K. music industry by women's groups End Violence Against Women Coalition, Imkaan and Object.

Katy Perry has the distinguished title of being one of pop music's worst cultural appropriators, and the video for "This Is How We Do" was quite racist. The lyrics of the song take aim at Japanese people — she sings, "Now we talking astrology, getting our nails did, all Japanese-y."

Also, not only did Perry use African-American vernacular English repeatedly and inexplicably in the video, but she also paraded around eating watermelon and wearing cornrows with her "baby hairs" slicked back, grossly stealing from and mocking black women's style.

Avril Lavigne has been massively popular in Japan for years, so to celebrate her Japanese fans she made "Hello Kitty," a video that infantilizes and fetishizes Japanese culture. It isn't exactly the best way to say thank you.

In addition to interjecting the song with random Japanese phrases like "arigato," she parades around Tokyo in a cupcake costume, clapping her hands like an excited schoolgirl while eating sushi — all the while trailed by a troop of expressionless Japanese female dancers that she uses as props. Much of the video could be explained as being endebted to Kawaii culture, but that last part, especially, was reminiscent of Gwen Stefani's racist "Harajuku Girls." Although Lavigne laughed off assertions that the video is racist, it is effectively a modern version of yellow face.

In his freestyle on "Shady CXVPHER," Eminem spouted more blatant misogyny, making a joke out of Janay Rice's domestic abuse and threatening to punch Lana Del Ray in the face. The disturbing, misogynistic lyrics of his rap say it all:

"But I may fight for gay rights, especially if they dyke is more of a knockout than Janay Rice / Play nice? Bitch I'll punch Lana Del Rey right in the face twice, like Ray Rice in broad daylight in the plain sight of the elevator surveillance / 'Til her head is banging on the railing, then celebrate with the Ravens."

How a grown man could ever think this is an acceptable way to make art is beyond all logical explanation. Domestic violence is never something to be taken lightly.

"LA Song" by Rain was another K-pop song that made headlines this year for its racist, sexist depiction of black women. In the video, Rain approaches a black woman, grabs her and forcefully kisses her. This kiss appears to "unleash her sexuality" and makes her ass inflate like a balloon.

This scene harkens directly back to the racist, sexist European depictions of Saartjie Baartman and shows the ongoing influence of Western stereotypes and racism across the globe.

Iggy Azalea is a cultural appropriator with a long history of racism. Although she isn't "running hip-hop," as Forbes initially asserted, her song "Fancy" did dominate the music world this year. This was largely due to her marketability as a white artist.

The song itself was a prime offender — she gentrified a black and Latino art form over a copycatted DJ Mustard beat. The song set the tone for Azalea's rise, and throughout she offensively changes her Australian accent to sound like a Southern black woman.

"Fancy" only became the cultural phenomenon that it was in 2014 because Azalea is a white woman pretending to be black — and in 2014, white people still sell better.