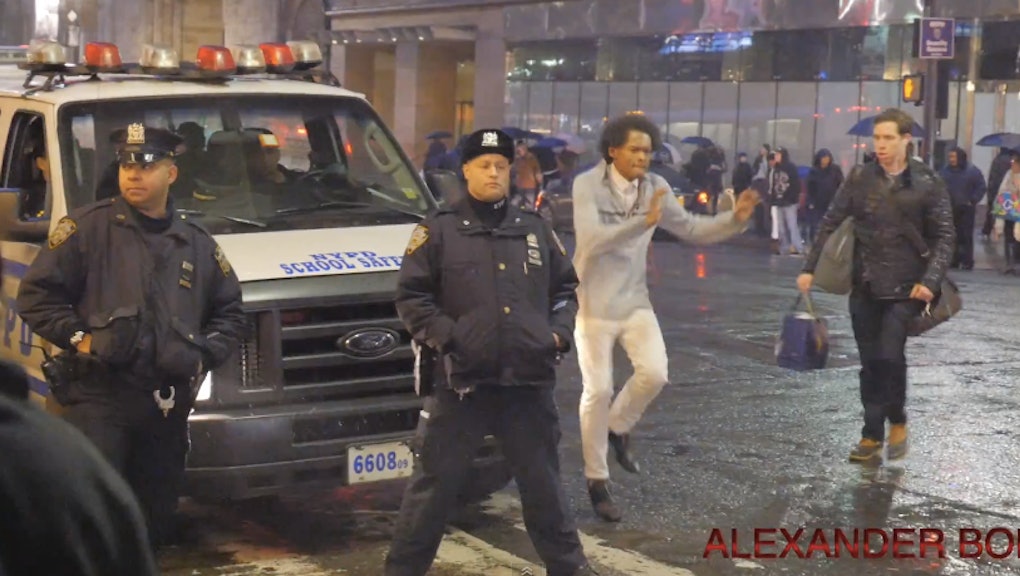 In yet another incident illustrating the current environment of distrust and disrespect between police officers and civilians, a YouTube prankster attempting to mimic Ellen DeGeneres found himself sprawled on the sidewalk.

The prank, originally created by the always fancy-footed talk show host DeGeneres, is a "dare" to dance behind strangers without them noticing, then acting totally cool if they do, while having the dare filmed. Internet personality Alexander Bok, a man of color, attempted a series of dance dares at Grand Central Station in New York on Christmas Eve. His dancing didn't go over so well when he attempted to dance in front of a parked NYPD van. In fact, cops rushed Bok, yelling, "What's wrong with you, bro?" before throwing him to the ground.

Dancing While Black: Bok's encounter with the cops was more embarrassing than anything else; he walked away to dance another day. But the attitudes of the officers nonetheless serve as yet another vivid representation of the heightened tensions between the NYPD and the black community in recent weeks, in the wake of the Eric Garner non-indictment and the equally tragic homicides of two Brooklyn officers the week before Christmas.

What started as reasonable verbal questioning quickly escalated into physical intimidation, as the video shows officers yelling at and then pushing Bok against the NYPD vehicle.

Realizing they couldn't arrest Bok for simply dancing in the street, the half-dozen white male cops ultimately let Bok go — but not before telling him to "take a fucking walk" and throwing him to the ground:

While there is no indication that DeGeneres herself has seen or responded to the video, social media has been tweeting at her using the hashtag #DanceDare.

Bok's dance dare, intended in jest in light of the holidays, was perceived as anything but that by the NYPD. And it stands as a frightening symbol of the feeling in the streets today: Black people are being hemmed in at all corners by the unrelenting threat of police violence against them.