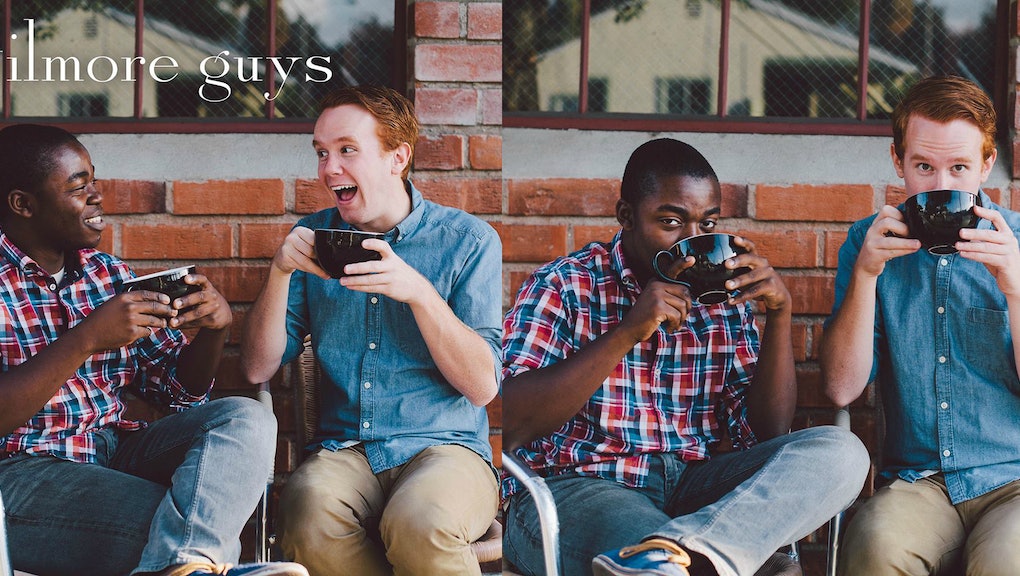 If you have a guy friend who secretly loves Gilmore Girls but won't admit it, call his bluff, have him drop Serial and start listening to Gilmore Guys, a twice-weekly podcast in which two guys chat about the mother-daughter pop culture phenomenon.

Meet Demi Adejuyigbe and Kevin T. Porter, the voices behind the podcast dedicated to covering the happenings of Stars Hollow.

Some background: Porter is a longtime fan of the series and has watched it in full, while Adejuyigbe is a newbie to all things Rory and Lorelai. Their podcast episodes follow a standard formula. They cover plot points from episodes, discuss pop culture references, chat about themes or lessons and occasionally ponder the early 2000 wardrobe choices. Each show culminates with an episode rating.

One of the best parts of the Gilmore Guys format is the way it allows for dialogue between the hosts and the guests they invite to dish. On Porter and Adejuyigbe's couch, are all free to agree and disagree.

As Adejuyigbe told the Atlantic, this open format is essential to their success.

"I know a lot of listeners disagree, but I think that having those dissenting opinions and having people who don't know the show very well is probably one of the most fun things about it," he said.

The often witty and layered insight aside, Gilmore Guys is refreshing proof that gendered genre labels like "chick flick" are increasingly outdated. Just like female viewers, the hosts and their guests not only enjoy the show, but can also think critically about episodes, some of which they may not like. This is entertainment, and it's silly to try to pigeonhole its audience.

If this podcast proves anything, it's that Gilmore Girls should be watched by more men. The show is noteworthy for its lessons on female friendship and motherly love, themes sons need to be familiar with just as much as daughters. The podcast is clear on this point: Real men can appreciate strong female characters.

Currently, you can listen to the podcasts either on their Soundcloud or download them from iTunes. Still in the middle of season two right now, new fans have more enough time to get caught up before that most important of questions: Will the guys be Team Jess or Team Dean?