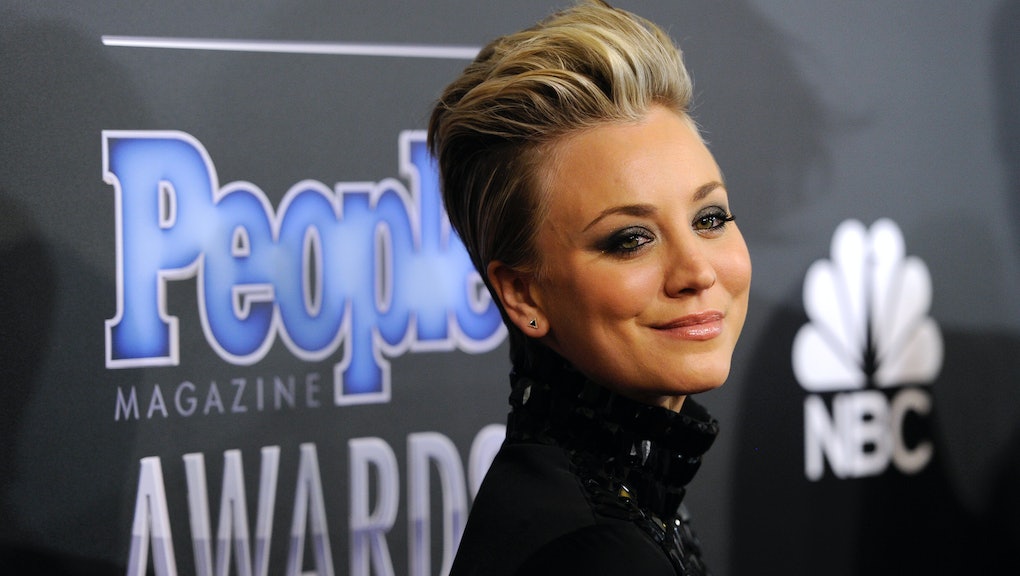 Big Bang Theory star Kaley Cuoco, featured on the upcoming February cover of Redbook, is the latest high-profile celebrity to declare that she is positively not a feminist.

In her interview with the magazine, Cuoco explained she's not a feminist because she likes cooking, being a "housewife," and generally "serving" her husband. She also said she doesn't really think about it because she's never really had to:

"Things are different now, and I know a lot of the work that paved the way for women happened before I was around ... I was never that feminist girl demanding equality, but maybe that's because I've never really faced inequality."

It also matters because her rejection is premised in false logic, as Gawker so deftly deconstructed it. Cuoco cites examples from her life as evidence of how she doesn't need feminism, when in fact they're evidence of it in action. All the choices Cuoco has made for herself, including being a housewife, are part and parcel to the fact that feminism that espouses freedom of choice for women. Women can choose to be housewives and still be feminist — or not.

What is also interesting is that Cuoco cites her privilege of "never really fac[ing] inequality" as the reason she doesn't need feminism. This is a dangerous and ignorant sentiment. An infinitesimally small percentage of women earn a reported $1 million per episode for their hit TV sitcoms. Perhaps Cuoco — along with other rich, white women who have publicly rejected feminism like Katy Perry and Shailene Woodley — should realize that all those "feminist girl[s] demanding equality" in large part made her privilege possible.

Why Cuoco's rejection doesn't matter: For the very same reason, frankly, that it does — because she is just a celebrity. At the end of the day, she's an actress who recites lines on a TV show. She is not a public intellectual, politician or activist — she has never claimed to be any of these things. Any collective resentment or disappointment in her ability to understand conceptual feminism is as much a sign of Cuoco's failings as it is society's disappointing but ongoing need to seek advice from celebrities.

This is the problem with celebrity feminism. By focusing on the sensational aspects of the movement, we overlook the real work of the movement itself.

"So long as we continue to stare into the glittery light of the latest celebrity feminist, we avoid looking at the very real inequities that women throughout the world continue to face," Roxane Gay wrote for the Guardian. "We avoid having the conversations about the hard work changing this culture will require."

In this regard, should we care that a wealthy female celebrity claims not to be a feminist when it's clear her life has benefited from feminism?