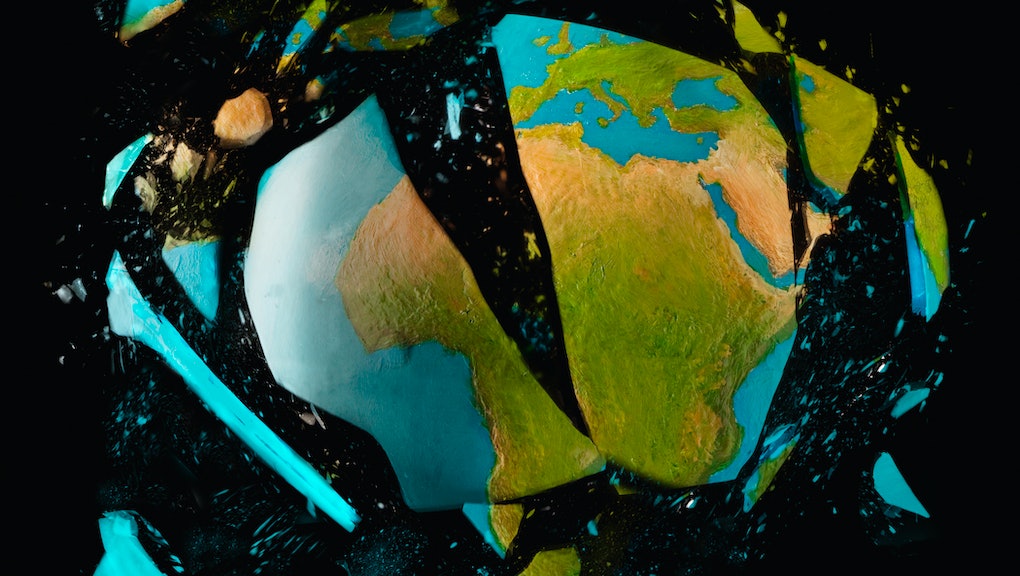 The World Isn't Falling Apart. So Why Does Everyone Think It Is?

As 2014 came to a close, the most common sentiment expressed in media circles can be distilled to two words: good riddance.

Last year was simply the worst, journalists will have you believe, because of the horrors of Ebola, the Islamic State, doomed planes, countless rape allegations, new Russian imperialism and so much more.

But two researchers note that sentiment isn't quite accurate, in an attempt to remind the commentariat that a Twitter feed is a poor way to keep track of the course of human events. In an essay for Slate, Steven Pinker, a psychology professor at Harvard University, and Andrew Mack, director of the Human Security Report Project at Simon Fraser University, embark upon an extensive survey of major indicators of societal stability. They come away with a conclusion opposing that of the chattering classes: The world is as safe as it's ever been.

As they illustrate through detailed charts and analyses, human civilization is sailing on calm seas according to measures of rates of homicide, violence against women, violence against children, genocide, armed conflict and autocracy. All of these phenomena are either at or very close to historic lows:

Rather than gawk at the gruesomeness of a recorded beheading, it is both wiser and more ethical to train your eyes upon the data:

"The only sound way to appraise the state of the world is to count. How many violent acts has the world seen compared with the number of opportunities? And is that number going up or down? ... A quantitative mindset is in fact the morally enlightened one. It treats every human life as having equal value, rather than privileging the people who are closest to us or most photogenic. And it holds out the hope that we might identify the causes of violence and thereby implement the measures that are most likely to reduce it."

So should professional observers brush up on statistics and make heavier use of a calculator when writing stories? It probably wouldn't hurt. There is an unmistakable tendency of journalists to be duped by coincidence or to read too much into horrifying disasters, and in the process often turn a blind eye to the quiet, widespread suffering that doesn't captivate, such as chronic hunger or preventable disease.

Still, something else must account for the tangible increase in the sensation of alarm. The world was not consumed by total war and economic catastrophe or submerged under water, and yet in the media universe — not a representative sample of the population, but one that has enormous sway on how the public perceives the world — 2014 could not have been more terrible.

If the world isn't getting worse, then why does it feel that way? Part of it is how people are learning about the world.

The medium, not the message: As the public square of the Internet has evolved, so has the perception of the news world. Spectacular news events have become more deeply interwoven with pop culture. Ebola and kidnappings become memes and hashtags. All of it becomes a BuzzFeed listicle.

Segregating themes of conversation for specific people, mindsets or times of day is more challenging than ever; the same online spaces are used for baby photos, casualties of war and political campaigns. An announcement that a friend is getting engaged is followed by news of a man being choked to death for selling loose cigarettes. All of this is compounded by faster and slicker mobile devices and apps that allow this stream to seep into your morning commute or a quick glance at the phone before bed.

Twitter is particularly important to explaining the frenzied mindset that the media class feels. In recent years the social network has taken off as an essential feature of the media landscape. Twitter has become a competitive space for political maneuvering, business interests, cultural life, celebrity drama, all kinds of official announcements and journalistic discourse. Many of the pioneer bloggers in the media world have outgrown their blogs, and their influential Twitter presence has become more important than their RSS feeds. As readers around the world are beginning to shun home pages of news sites in favor of social media, no journalist can afford to ignore it. (Amazingly, Twitter is still known to be a poor way to refer traffic to websites, and an increasing number of journalists now pen minor essays on Twitter itself.)

Twitter, which can't easily be curated or slowed the way that Facebook can, has always been a tornado. But over time it has become a much bigger and more important one. Its howling mix of the consequential with mindless banter, personal life oversharing and Internet miscellanea, all at breakneck velocity, cannot possibly be interpreted naturally. The brain is forced to funnel the swirl of shocking world events into a kind of ambient anxiety. In this kind of mental environment, it is difficult to feel even-keeled or optimistic.

Yes, many awful things happened in 2014. This will also be the case in 2015. But take it a little slower in consuming the Internet's version of the world, and it might be easier to take a healthier long view.