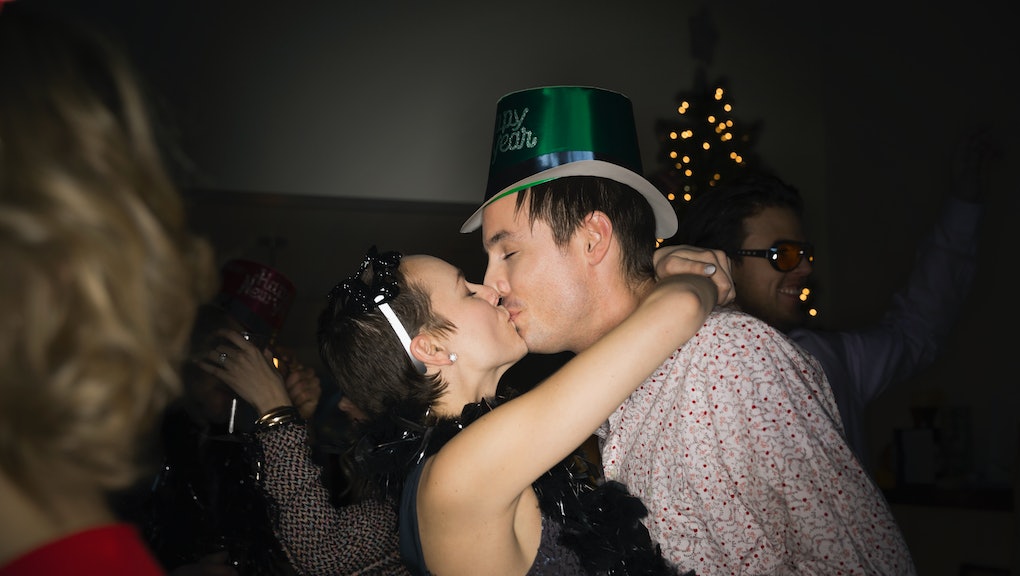 If New Year's Eve is the miserable pinnacle of forced festivities, then the traditional New Year's Eve kiss is the ultimate act of contrived holiday nonsense.

And it's time for us to toss it back out into the cold, harsh winter night from which it was born.

Before you write this off as an unromantic Scrooge-like rant, remember that New Year's Eve is one of America's most hated holidays, and for good reason. Consider the activities that come with most year-end celebrations: the wearing of stupid, sparkly accessories, the eating of crumbs that somehow pass for food, the drinking of bad mixed drinks and André champagne and the pitiful blowing into cheap plastic "squawkers" that make the sneezing chicken sound like Pavarotti. Oh, not to mention the existential angst of a year coming to a close.

And the cherry on top off the sad, half-melted sundae that is New Year's Eve? The midnight kiss.

As YourTango's Amanda Green explains, superstition has it that for couples, neglecting to lock lips could mean bad luck for the rest of the relationship — and for singles, a kiss could bring good luck. But pop culture has shunted the New Year's kiss into the upper echelons of "fantasy" — beyond even the realm of the mistletoe smooch — leading us to believe that we need it in order to be happy, at least in the moment.

The kiss comes with baggage. In fact, it's emblematic of the larger reasons we all (not so) secretly hate New Year's Eve.

Any kind of forced socialization is sure to heighten tension, which increases exponentially when romantic hijinks are involved. Throw a few gallons of alcohol into the mix and you have a recipe for fireworks — and no, not the sexy kind.

A midnight peck can also throw pre-existing social dynamics out of whack. It's the holiday version of the Kiss Cam — you never know whose lips you'll end up next to, and hard as you may try, you could find yourself staring into the face of someone, er, undesirable. There are probably enough people at the party you don't want to talk to. How many could there be you actually want to kiss?

2. It's "fun," if fun were contrived and awkward for everybody involved.

Even if you don't know whom you'll be snuggling up to at midnight, the fact that's it's looming in the distance reduces any appeal the interaction may have had. A lack of spontaneity, particularly where romantic things are concerned, can be a downer, like planned sex or going on the same date every time.

Plus, studies show kissing isn't as sexy as it is romantic — and engaging in a romantic act with someone you don't, you know, feel romantically toward can be downright unpleasant.

3. It intensifies all those pre-existing insecurities or unhappiness.

Whether you're part of a couple or more of a lone wolf, stress can emerge anew with midnight kisses. If you're afraid of being alone forever, lacking a partner only adds to that abysmal feeling. If you do have a partner but aren't feeling the best about your relationship, the pressure to make it great can make you want to chug a bottle of wine.

Which brings us to our final and most important argument against the New Year's Eve kiss:

4. It never lives up to expectations anyway.

It can't. Sure, you may find your Prince Charming or Cinderella this Dec. 31, but in all likelihood you'll be struggling through a haze of cheap champagne and canapés, pulling confetti out of your hair or collapsing onto the couch in exhaustion. More often than not, the night was just fine — but a bright, sparkling fantasy it was not.

How could it be? New Year's Eve is just a big ol' party that happens to fall on the most angst-ridden night of the year. There's only one thing that could be a bigger setup for disappointment: scheduling a forced moment of romance to cap off the night.