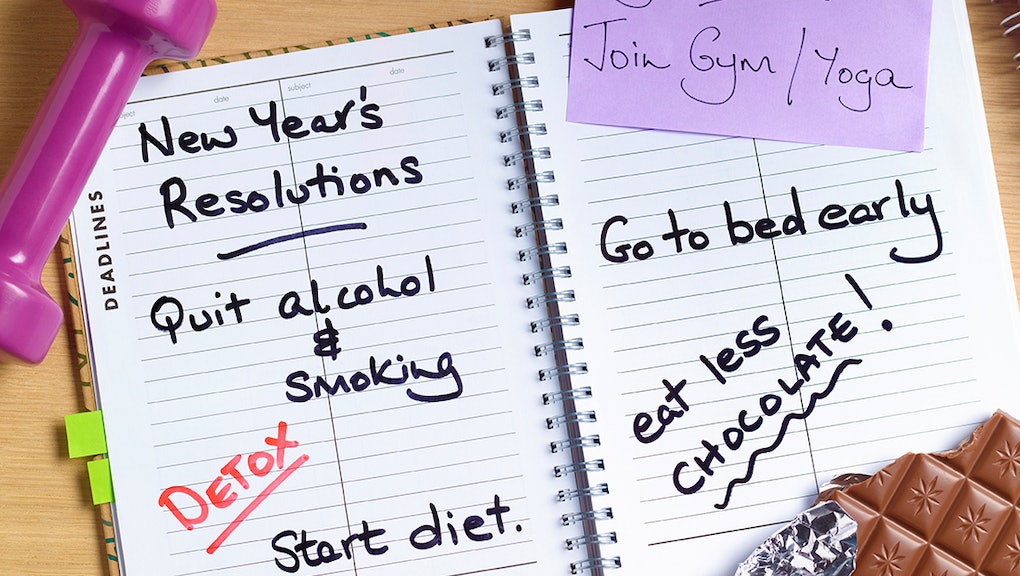 What is it about New Year's resolutions that make them so impossible?

The gym is the perfect illustration of how New Year's resolutions usually turn out. In January the weight room is packed and the treadmills are filled, but by February the crowd has dwindled. Even though nearly half of the population makes New Year's resolutions, only 8% end up sticking to them. Why are they so tough to keep?

Usually we're just not ready for change. Though common resolutions, including generally positive goals such as losing weight, exercising more, quitting a bad habit like smoking and improving money management, often we aren't really ready to make that leap to reinvent ourselves.

Timothy Pychyl, a professor of psychology at Carleton University, told Psychology Today that although people make resolutions as a means of motivation, most people "aren't ready to change their habits, particularly bad habits, and that accounts for the high failure rate."

Other times, some of the goals we set for ourselves are simply too lofty. Psychologists describe this phenomenon as "false hope syndrome": People set goals that are unrealistic and ultimately "out of alignment with their internal view of themselves." Unfortunately, this practice can do more harm than good to your sense of self-worth.

There also tends to be a disconnect between the expected results of a resolution and the actual accomplishment. For instance, Psychology Today reports that "you may think that if you lost weight, or reduce your debts, or exercise more, your entire life will change, and when it doesn't, you may get discouraged" and land back at square one.

So what's a better option? Rather than setting lofty goals for the entire year, setting a new resolution each month might be a more realistic and manageable method. Frequent resolutions with shorter time periods result in greater success "because you only have one supply of willpower," according to psychologist Roy Baumeister.

Making various monthly resolutions still lets you accomplish several life changes over the course of the year, but by tackling your challenges one at a time, you'll have more focus to devote to each one and have a higher chance of success.

Regardless of your time frame of choice, a simple way to increase your likelihood of success is to write that goal down. It's been found that writing down your goals and outlining clear steps to achieve those goals can make you feel "more confident and energetic" and serve as a reminder to keep yourself on track.

With these tips in mind, the gym might be looking a lot fuller come February.