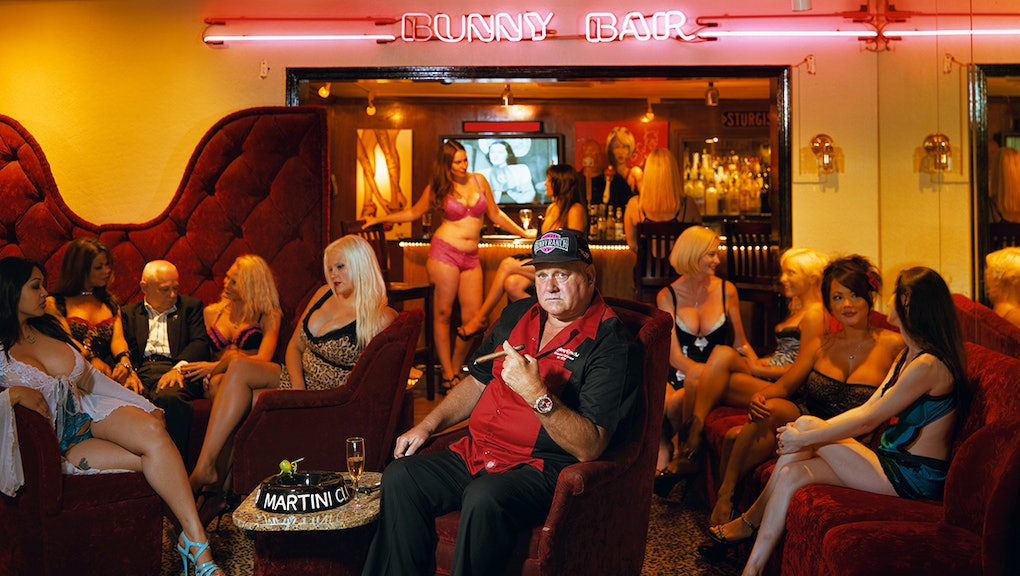 "I originally imagined the Nevada brothels would be these dirty, dingy trailers out in the middle of the desert," photographer Marc McAndrews told Mic. "I guess the best way to describe the type of person I was expecting to find there would be as someone out of a Nick Cave song: lost drifters and social misfits."

Five years and 33 Nevadan brothels later, not only did McAndrews proved his own assumptions wrong, but the photography project that came out of his travels offers a view of a sexual landscape rarely seen.

In an interview with Mic, McAndrews talked about what motivated him to document America's brothels, an effort published in the book Nevada Rose: Inside the American Brothel. Setting out in 2005 and living in 23 of the 33 brothels over the duration of the project, McAndrews' photographs portray the relationships and social dynamics between the women who work at the brothels and their clients. Although more often associated with Playboy bunny salaciousness, the photographs capture a much more authentic — and ultimately rather mundane — existence.

His portraits also offer a glimpse of the women's humanity, despite their unconventional professions. These women are not objects who are bought and sold; rather, as McAndrews discovered, they are often strong, entrepreneurial women with their own goals and motivations for being sex workers. "Being able to interact with the women as who they are, not as a character they were portraying, really helped to inform the project," he said.

The brothel system: While more commonly and politely referring to each other as "working girls," each brothel McAndrews visited has a hierarchy system with a number of names and designations denoting the position of each girl within that particular brothel. The women, he said, ranged in age from 18 to mid-60s; demographically, they "skewed" white, but he did notice a "diverse range of women" in general.

The "Big Sister" is often a name given to "the most experienced woman, or the one that has been in each particular brothel the longest," McAndrews explains. "She would function as a representative for the women to management." Big Sister, with the help of the "House Mom," or the manager, is tasked with handling complaints from the women and working with management about any problems they might have. She also helps any first-time sex workers — known as "Turn Outs" — by accompanying them "through the whole process the first few times; everything from initially talking with a customer to the negotiation. She would even be there for the Turn Out's first party with a customer."

As one can imagine, it took McAndrews some time to gain access to the close-knit communities. After being turned down at the famous Bunny Ranch, he traveled to Elko, Nevada, and was permitted to stay at Mona's Ranch. From then on, he was "shocked" by the access he got to all the brothels.

"After I photographed in Mona's Ranch, I had Polaroids to show the other owners exactly what I wanted to do," he explained. "Occasionally I would see some of the same women I had met at other brothels who would be able to vouch for me and what I was doing. Once I was given the OK, they set some ground rules about when I could and couldn't shoot and about asking permission from the women and customers."

Framing the sex object as human: Through his interviews, McAndrews was able to tease out the stories and motivations of each women, from financial need to the fulfillment of a something more personal. "I met a woman who was a ninth-grade math teacher in Minnesota during the school year and was doing this because, as she described, it was a personal kink," he said. "I met another woman who had never done any sex work before but turned to the brothels when she lost her job and couldn't find other work in the recession. She was able to support her family like this. There was no single good or bad reason why women worked there."

While sex work is illegal almost everywhere in the U.S., Nevada is the only state that does legally permit and regulate brothels in the same way as it does other industries.

"The reasons women worked there are as varied as each of the women," McAndrews tells Mic. "The brothels offered a safe alternative to the illegal business free from drugs and with independence to negotiate for themselves."

Working girls in control: "Intimacy is not uncommon in the brothels," McAndrews says. In his five years, he witnessed the extent of the familial and supportive community not only fostered among the working girls but among the women and their patrons. "I was at Donna's Battle Mountain Ranch where I met a man who would come in every Thursday evening to cook dinner for all of the women. No services were rendered in exchange, and the women, regulars and locals would all hang out and have dinner together. There's also been a number of women and customers who have gotten married."

At the same time, McAndrews observed how intimacy was negotiated and understood by many of the women who had lives outside the brothels. "One of the most interesting aspects of the brothels was the way women separated their jobs from their personal sex lives," he said. "Many of the women had boyfriends or were married with kids. The fact that they had sex for a living didn't seem to diminish the value they put on their physical relationship with their husbands/boyfriends."

The politics of sex work: While he was clear that he didn't want his project to be "either pro- or anti-prostitution," McAndrews said Nevada Rose illustrates the power and personhood of these women, in large part, by breaking down the stereotypes of sex workers. Even feminists are divided on the issue, with one narrative, espoused by people like Andrea Dworkin in the 1980s, consider it inherently misogynistic. This narrative hinges on a number of debates, primarily about the labor, or "work," of sex work and the objectification of women.

Noting the stories of these women — many of whom he invites along to do book signings and speaking engagements with him — McAndrews emphasizes the feminist tenet of control over one's body in his work. "A common thread through many of the women's stories is 'choice,'" he said. "For good or bad, or however people want to judge their situation, the women made a choice to do this work."

Ultimately, McAndrews said he wasn't trying to glorify the profession or make a political statement. He just wanted to pull back the curtain a bit, which is something the women, too, seemed to appreciate.

"When most people think of prostitution, they think of illegal prostitution and all of the exploitative and negative consequences that go along with it," McAndrews observes. "I think Nevada Rose shows a side where the women are not embarrassed or ashamed."