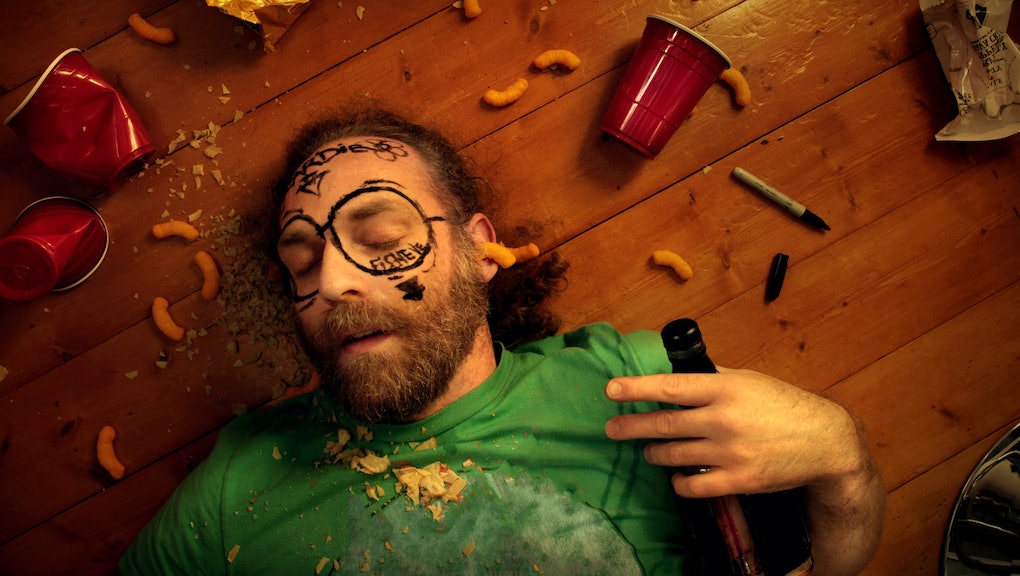 Why Hangovers May Actually Be One of Science's Biggest Mysteries

Beer before liquor, never been sicker. Liquor before beer, you're in the clear. Follow a simple rule like this on New Year's Eve and you'll begin 2015 hangover-free, right?

Liquor before beer, and you still may be puking into the new year. The same goes for most of what you've learned about hangovers. Even scientists don't know exactly why a night of drinking precedes a day of dry-heaving and swearing off Jungle Juice.

Hangovers, which affect most drinkers, have been a bit of a scientific mystery since alcohol became a thing (so, for thousands of years). Despite decades of studies on drinking behavior, hangovers only recently became a topic of serious scientific inquiry. In 2009, a group of European and American researchers formed the Alcohol Hangover Research Group. Their work has helped clear the fog on hangovers. But so far, they've mostly shown us how wrong we were.

Why study hangovers? For starters, hangovers are hell. But, as the AHRG has pointed out, they're also a public health problem. Frequent hangovers indicate poor health and millions of half-functioning people threaten public safety, according to a 2010 article published in Current Drug Abuse Reviews.

In a Finnish study, researchers found a link between hangover frequency and cardiovascular death. Other research suggests that hangovers impair motor skills and cognitive performance. As a result, hungover workers are slow and careless, and hungover drivers pose a risk to everyone on the road. Most drivers, according to the AHRG, say they occasionally get behind the wheel hungover, and 10% say they do it often.

So what do we know? Hangovers have some genetic component. About 77% of the drinking population gets hangovers. People who don't (besides being the worst) are evidence that the ability to drink-and-rally is partially inherited.

We also know that hangovers set in when blood alcohol concentration returns to zero. The minimum BAC level needed to cause a hangover is about .1 to .12.  It takes roughly five drinks for a man and three for a woman to reach this level, said Jason Burke, an anesthesiologist who opened Hangover Heaven, a Las Vegas hangover treatment center, in 2011.

The .1 to .12 window also happens to be the highest BAC level researchers have tested in hangover studies, which are difficult to conduct in the first place.

"Hangovers are a relatively intense, short experience that are hard to recreate in clinical trials," said Burke. "There are also ethical issues when it comes to how much you can elevate someone's BAC."

Clinical studies require advanced planning. Researchers can't just walk over to brunch spots and scout for people who look like they went too hard last night. And getting people wasted to analyze their subsequent anguish does get morally murky. While it might be out of the question to study people the morning after binge drinking (which causes BAC levels two to three times higher than the .1 hangover threshold), analyzing people after just a few drinks has still helped researchers debunk popular hangover myths.

Researchers have learned, for example, that alcohol withdrawal isn't responsible for hangovers, as people only experience withdrawal symptoms after they form an addiction to a substance, which doesn't happen from a night-long bender.

They've also figured out that hangovers don't come from dehydration. While excessive drinking causes both hangovers and dehydration, the processes seem to occur independently, according to a 2008 article by Joris Vester, the Dutch psychopharmacologist who heads up the AHRG.

Burke's experience at Hangover Heaven further weakens the dehydration theory. His most effective hangover remedy is an intravenous cocktail of water, Advil, antioxidants and anti nausea meds. Since opening shop, Burke has continued to tweak the recipe. He believes that mainlining antioxidants is what's really doing the trick, rather than the amount of fluid intake, but he wants to confirm his suspicion with hardcore scientific research, rather than observation alone.

What's there to study? The biochemical mechanism underlying hangovers — i.e., what drinking does to our brains and bodies that makes us feel terrible — has long been tricky to pin down. It seems like a few processes may contribute to the condition.

One theory hinges on the presence of a chemical called acetaldehyde in the blood stream. Alcohol gets converted into acetaldehyde, which builds up and disappears quickly, making it difficult to study, Burke said. At high levels, acetaldehyde is toxic and can cause tissue damage. Lower levels, some researchers believe, just make people feel crappy.

One Japanese study found that people who lack the enzyme that converts acetaldehyde into a nontoxic compound had a lower tolerance for alcohol and experienced worse hangovers. But another study contradicted these findings, as AHRG researchers explained in a 2010 article called "The Pathology of Alcohol Hangover." In this study, student participants had the most severe hangover symptoms when acetaldehyde levels were low. So the jury's still out on the role of acetaldehyde.

It's also possible that hangovers cause inflammation of the immune system. Research has shown that hungover people have elevated levels of molecules called cytokines. Artificially increasing cytokine levels in healthy people appears to induce hangover symptoms. But inflammation probably doesn't explain hangovers entirely, or else gobbling down Advil would be more effective.

There's evidence that an ingredient in alcohol itself, called a congener, is the culprit. Booze is composed of two substances: ethanol (alcohol) and congeners. This theory hinges on something many imbibers know from trial and error: Dark liquor causes worse hangovers than clear liquor does. In a 2010 study published in the journal Alcoholism: Clinical and Experimental Research, researchers found that people felt better after sipping on congener-light vodka than bourbon, which is rich in color and congeners.

Then there's the brain. While the liver is the workhorse of metabolizing alcohol, other organs, including the brain, help out too. When the brain breaks down ethanol, neurotransmitter levels fluctuate, which is part of the reason drunk people often get bubbly before they get beer tears. Studying brain chemistry responses to alcohol is expensive and hard, but Burke thinks the brain holds the key to cracking the hangover code.

At this point, hangover research is still exploratory. Without understanding the basis of hangovers, it's unlikely we'll find a cure. But there are plenty of remedies that people swear by and which have at least some scientific basis: Check out this guide to your New Year's Day hangover, as reported by Mic's Jordan Valinsky, for some suggestions.

And here's at least one piece of advice to help you rage tonight without ruining tomorrow: It's much easier to prevent hangovers than cure them.

And sober up before you hit the hay. Going to bed drunk is a guaranteed way to wake up feeling terrible. Otherwise, happy New Year.