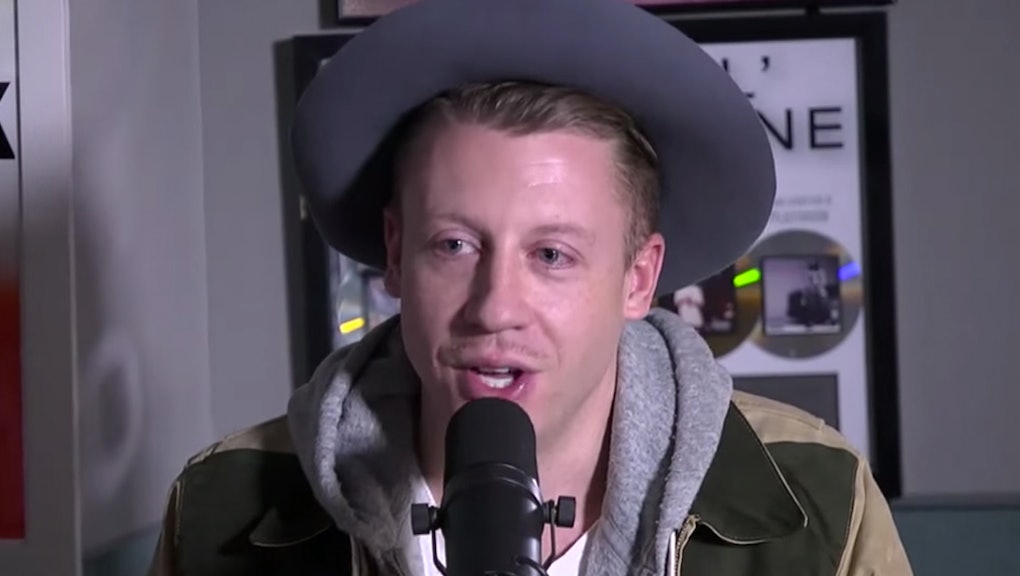 Everyone Needs to Hear Macklemore on Iggy Azalea, White Privilege and Race in America

It's been a fairly quiet year for Macklemore. After his breakout success with Ryan Lewis on 2012's The Heist, the rapper and his producer-teammate took a backseat when it came to social commentary and general public awareness.

But, being what some may call a "socially conscious rapper," Macklemore recently spent an hour with the hosts of Hot 97's Monday morning radio show to talk about everything from his success and Iggy Azalea to race relations in America and the conversations we need to be having right now.

Throughout the conversation, which is fairly long but certainly worth a listen in its entirety, Macklemore discussed how his white privilege has afforded his certain opportunities, but also said he's constantly reminded of the issues of cultural appropriation in hip-hop and rap music.

On the issue of white appropriation in hip-hop (bold added):

"You need to know your place in the culture. Are you contributing or are you taking? Are you using it for your own advantage or are you contributing? [...] Just because there's been more successful white rappers, you cannot disregard where this culture came from and our place in it as white people. This is not my culture to begin with. As much as I have honed my craft [...] I do believe that I need to know my place."

Though he never mentions her name directly, it seems pretty clear at several points in the interview that Macklemore is referring to Iggy Azalea and how, as Mic's Tom Barnes noted, "The whole hip-hop community has finally taken Azalea to task for building her career by stealing black musical sounds and styles and using her whiteness to sell them to the masses. In the process, she has done little to actually give back to the hip-hop community except be flagrantly offensive."

When talking about white appropriation and "knowing your place in the culture," while being aware of whether "you [are] using it for your own advantage or [you are] contributing?" Macklemore seems to be clearly touching on these issues and joining the chorus of artists who are less than impressed with what appears to be Azalea's blatant and unapologetic cultural appropriation for her own gains.

And, according to Macklemore, these are important issues that clearly deserve attention, whether Azalea agrees with that or not:

On this note, Macklemore turned his attention to a more general discussion of race in America, and on what it means to be a white American in 2014 (bold added):

"White, liberal people want to be nice. We don't want to be racist. We want to be, "Oh we're post-racial. We don't want to talk about white privilege and it's all good, right?" It's not the case. Silence is an action and it's my privilege that I can be silent about this issue. And I'm tired of being silent about it. We have to get past that awkward stage of the race conversation. As a white person, we have to listen. We need to direct the attention to the people of color that are on the ground mobilizing and listen to those people."

But how does Macklemore, a white guy from Seattle, know about these kinds of problems? Well, as he notes, for better or worse, the color of his skin has actually been a major factor in his success as an artist (bold added):

"Why am I safe? Why can I cuss on a record, have a parental advisory sticker on the cover of my album, yet parents are still like, "You're the only rap I let my kids listen to." [...] If I was black, what would my drug addiction look like? It would be twisted into something else versus maybe, "Get back on your feet!" The privilege that exists in the music industry is just a greater symptom of the privilege that exists in America. There's no difference [...] I got put in that "hero" box and I think that when that happens, it's because of white privilege."

More specifically, on the social unrest that's recently increased as a result of the racial injustice that's clouded America, specifically since the non-indictments in the cases of deaths Michael Brown and Eric Garner by police officers, Macklemore said (bold added):

"Eric Garner, Mike Brown [are] very sad situations; situations that left so much frustration in me watching these injustices happen again. [...] If there's anything positive that has come out of their deaths, I believe it has brought attention to the injustices that have been plaguing America since the [beginning]. Racial profiling. Corrupt judicial system. Police brutality. Now people are talking about these things and mobilizing. I've been inspired by watching people in the community get involved. For me, as a white rapper, I'm like, "How do I get involved on a level where I'm not co-opting the movement, but also realizing the platform that I have and the reach that I have and doing it in an authentic, genuine way."

Macklemore's comments are insightful, smart and correct. Just because he hasn't been the most vocal or active member of the hip-hop scene in the past year doesn't mean — as this interview clearly showed — that he hasn't been listening and paying attention to what's going on. Maybe, as Macklemore himself said, he's just "tired of being silent about it." And frankly, if these are the kinds of things he has to say, we can't wait to hear more.