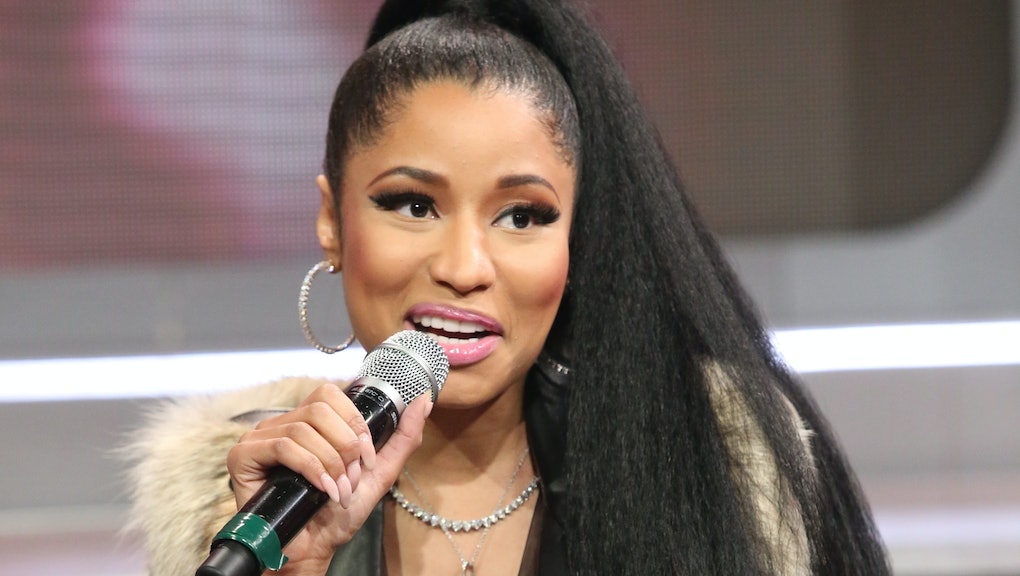 There's not much Nicki Minaj won't talk about, and now we can add abortion to that list of taboo topics she's not afraid to take on.

The Pinkprint artist bared all in the latest issue of Rolling Stone, on stands Friday, including details about the abortion she had as a teenager, which she also alludes to on her new album. In the interview, Minaj divulged details about what happened after she got pregnant by her "first love," an older man.

"I thought I was going to die," Minaj said. "I was a teenager. It was the hardest thing I'd ever gone through." And while the decision has "haunted" her, she knew it was the right choice for her. "It'd be contradictory if I said I wasn't pro-choice. I wasn't ready. I didn't have anything to offer a child."

Minaj publicly discussing her abortion is crucial. The singer's comments are important, not just because they continue to help normalize abortion, but because she represents a group whose voice is rarely heard in the broader pro-choice narrative.

Although abortion rates are at a record low, rates among Hispanic and black women remain higher than the national average. According to the Guttmacher Institute, the abortion rate for African-American women is five times higher than that of white women and twice as high for Latina women.

Why the racial disparity? The Atlantic explored this topic in September in the piece "Abortion's Racial Gap." Christine Dehlendorf, a University of California professor, pointed to a variety of systemic factors that may be contributing to the problem.

"We don't fully understand what's going on," she said. "But ultimately I think it's about structural determinants — economic reasons, issues related to racism, differences in opportunities, differences in social and historical context."

Unfortunately, most statistical reports on abortion largely ignore this context in analyses, so we are, for the most part, left with speculation.

But it's not just researchers who ignore women of color's experiences. Their stories are conspicuously absent from public discourse on abortion as well.

As women are increasingly encouraged to share their abortion stories, it's white women's voices that dominate the conversation. From speak-outs to media coverage, abortion stories are overwhelmingly and unmistakably white. And while it's wonderful that any women are willing to speak out, the discussion needs to be wholly representative of all women's experiences.

The takeaway? It is courageous that Minaj shared her abortion experience with the world, both in this interview and more broadly, as part of her artistic work. But we need to provide safe, supportive environments for all women of color to likewise share their stories. Only then will the pro-choice movement be truly inclusive.