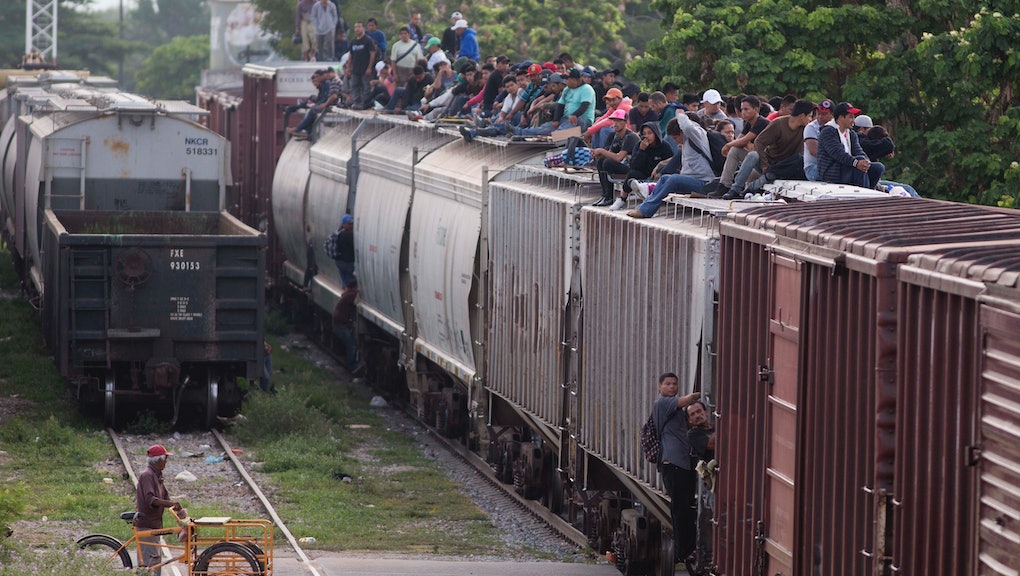 For the First Time, the U.S. Stopped More Non-Mexicans Than Mexicans at the Border

This year's immigration numbers made history — but not for the reasons Washington would have you believe.

This decline is part of a larger trend: The number of Mexican immigrants crossing the border into the United States have been trending downward since the Great Recession. Even despite the influx of unaccompanied children crossing the border this summer, the Boston Globe reports that the "overall unauthorized immigration into the United States has stalled" since President Barack Obama took office.

These numbers further underscore just how divorced the current political battle is from reality. While politicians like as Sen. Ted Cruz (R-Fla.), House Speaker John Boehner (R-Ohio) and Texas Gov. Rick Perry have conjured a specter of Mexican criminals and terrorists flooding over the border, the facts directly contradict that narrative.

Cruz, who has notoriously headed up the fight against immigration reform, has argued that the lack of border security has caused countless number of people to die crossing the border and left "'vulnerable women and children'" to be "preyed upon by drug dealers" and "left to die in the desert." He described the immigration system as one that "produces human tragedy."

While Cruz's horror stories aren't backed by data, his assessment is correct: Our broken immigration system does produce human tragedy. The majority of immigrants crossing the border this year were children fleeing Central America in what can be better described as a humanitarian crisis than an immigration inundation. Tens of thousands of young children crossed the border alone his year to escape high rates of violence and homicide and a lack of economic opportunity.

Despite the fact that the current reality of the Mexican border should more heartbreaking than alarming, Americans' anxiety over immigration has surged in recent months. Pew Research Center reports that between February 2013 and August 2014, the number of Americans who "said the priority should be on better border security when dealing with illegal immigration rose from 25% to 33%." A Gallup poll taken this summer revealed that "more Americans think immigration should be decreased than increased" — a sentiment especially espoused by Republicans. Only 14% of Republicans thought that immigration should be increased.

The political fervor over the issue is largely to blame. While the influx of immigrants has slowed, the U.S. federal government has increased spending on border security. When Obama imposed a massive immigration reform in November to ease the threat of deportation for the 4.4 million immigrants in the U.S. who are parents of U.S. citizens and legal permanent residents, Republicans immediately pushed back, vowing to fight for deportation. Weeks after Obama's announcement, House Republicans retaliated against his executive action by voting through an anti-immigration bill that would prevent the president from giving deportation reprieve.

Whether this congressional divide over immigration is the result of partisanship or just full-throated xenophobia, the anxiety of the American public and the Republican response largely miss the mark, particularly in light of the Pew Research Center's data. The number of Mexican immigrants who make up the largest percentage of the nation's unauthorized immigrant population are already crossing the border in declining numbers.

Ramping up border control and tightening deportation laws won't solve the current immigration conundrum. While border security is certainly a pressing issue for a number of other reasons — the activities of Mexican cartels, for one — an influx of Mexican immigrants is not a good reason.

This isn't a border security issue, it's a humanitarian issue. These aren't adults sneaking across the border — these are children fleeing for their own safety and for their families.