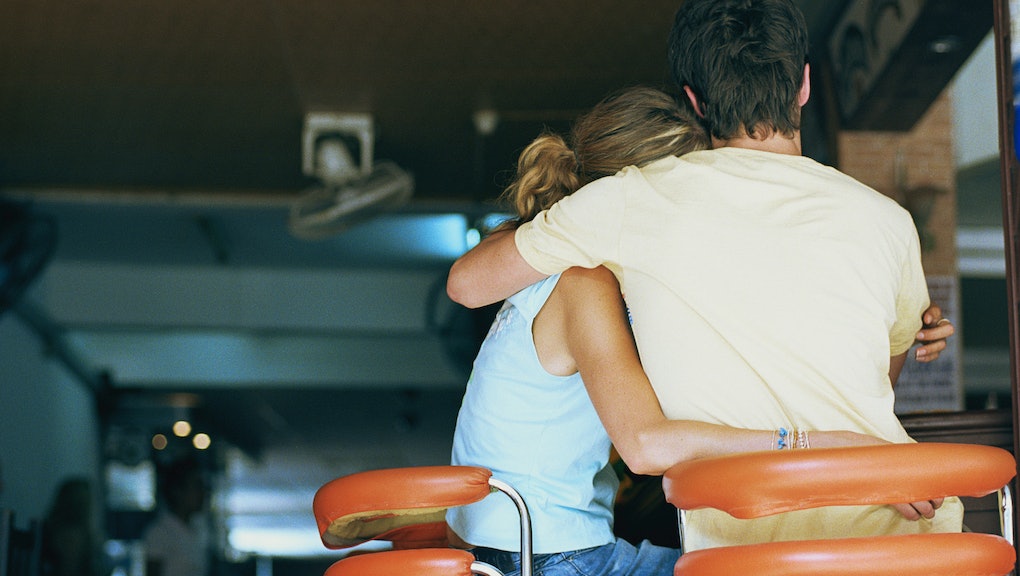 Many drunken New Year's resolutions concern losing weight, saving money or quitting unhealthy habits. But in the quiet of our minds, away from the midnight celebrations, many of our unspoken resolutions possess more emotional weight.

Get more into the dating scene. Lose that single status by summer. End the relationship that's been dragging on too long. Speak up more in the bedroom. Finally tie the knot. Have more orgasms.

Our need to date and mate, get together and break up, is always there. But how we do it changes by generation, by decade, even by year. (Case in point: Tinder is only two years old.) And we're always striving to meet expectations, reach contentment and find our own "normal."

Here's the brave new world of 2015, as we're entering it, by the numbers. Some statistics are surprising, some should come as no shock. Either way, no one — single or coupled — can say we're not living in interesting times.

That's how many Americans who are single. That's 50.2% of the adult population that's untethered, surpassing the population halfway mark for the first time in history (since researchers have been measuring such things, at least). So no, you're not the only single one. It just feels that way.

That's the percent of adults who've used a dating app or website, according to 2013 Pew data. That number grows for 25- to 34-year-olds, 22% of whom describe themselves as "online daters."

Believe it or not, that's the number of swipes made on Tinder per day, according to a New York Times report. The app made its debut in fall of 2012 and, for better or worse, has come to epitomize dating in our modern, constantly connected digital age. It has around 50 million users who log onto the app 11 times a day on average.

Sadly, that represents the number of people who "match" on Tinder per day. See the above number — yes, those are bad odds.

That massive number represents the average cost of dating per year for one person, based on a national survey of 5,000 singles by Match.com. Of course, that means the people who spend this much are the active daters — one respondent told USA Today he goes on four dates a week, minimum. That just sounds exhausting and painful.

That's the percent of American adults who say they've been "ghosted," aka had someone they were dating simply disappear, without nary a peep or a goodbye text. And 11% admitted to ghosting someone else while dating. The numbers were drawn from a survey conducted by YouGov and the Huffington Post of 1,000 American adults. No word on how many of those "ghostings" happened on Tinder.

We're all shacking up: That's the percent of young adults (25 to 34) living with a significant other while unmarried, aka cohabiting, according to Current Population Survey data. So yes, it's definitely normal — although don't assume that living with your S.O. will definitely lead to marriage. By some measures, only one-third of marriages have started that way.

The median age for first marriage for women, also found via census data. This is a historic high, having risen from a mere 23.9 in 1990. Go tell your mother to stop rushing you.

That's the median age American women are having their first baby, as found by the Census and the Centers for Disease Control and Prevention. This number represents the "Great Crossover," whereby the median age at first marriage actually exceeded the median age for first birth — meaning more and more women are having babies, then getting married, not the other way around. As of 2013, about 48% of first births are happening out of "wedlock" (as our parents once called it), according to a report by the National Campaign to Prevent Teen Pregnancy.

That's the number of Americans who have been married more than once. According to Pew data, 4 in 10 new marriages that happened in 2013 included at least one person who'd been married before. For half of those marriages, both partners had been married before. This is a major increase from previous years — and a comforting reality for anyone fearing divorce.

More sex for couples? The percent of people in relationships who have sex three to four times a week would indicate so. The number comes from a 2013 survey of 100,000 adults over 18 worldwide, including 23,000 Americans.

That's the surprisingly small percentage of single men who have sex more than twice a week, counting men ages 18 to 24 from a National Survey of Sexual Health and Behavior report. It turns out being single and "sowing your seeds" isn't all it's cracked up to be.