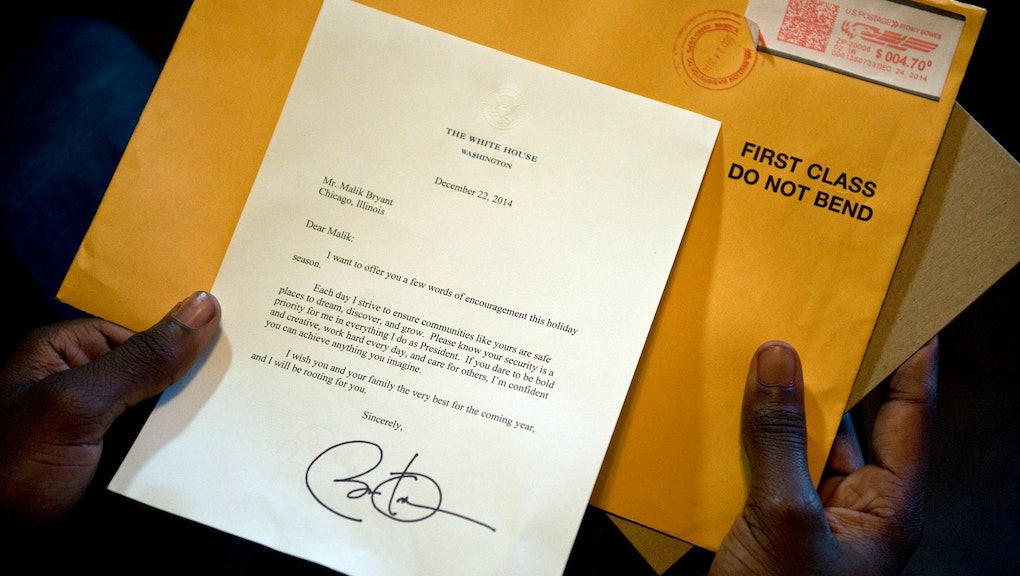 Malik Bryant has seen a lot of things living in Chicago's South Side: Gang violence, beatings and even the corpse of another kid he knew. But this holiday season, he opened an envelope from the White House to see something new: a personal letter of encouragement from President Barack Obama.

Bryant was one of 8,500 Chicago Public Schools students who participated in DirectEffect Charities' annual Letters to Santa program. But instead of video games, clothes or gadgets, Bryant wrote that just wanted to live free from fear.

According to the Chicago Sun-Times, Bryant's letter was simple and devastating: "All I ask for is for safety. I just wanna be safe."

"When I pulled this one letter from a seventh-grade class at an Englewood elementary school, I couldn't stop reading it," DirectEffect CEO Michelle DiGiacomo told the Chicago Sun-Times. "All this kid was asking for was safety. I was floored."

From there, DiGiacomo forwarded the letter to U.S. Rep. Michael Quigley, "who agreed to forward it to the White House," according to the Chicago Sun-Times. There, it sparked the genuine response from President Obama — who told Bryant that he "will be rooting for [him]."

The simple gesture alone probably won't do much to change the reality of life in Englewood, where 170 people have been killed since 2007. But Malik clearly considers the experience a profound one, despite what Complex called his "chillingly pragmatic" understanding of life on the South Side.

"I barely can't even go outside anymore, can't ride my bike, can't play ball, can't go play with my cousins, because you have to watch your back every 30 seconds," he told the Chicago Sun-Times. "I know the president's letter isn't going to, like, solve the safety reasons out here, and it's still going to be dangerous, but I'm excited the president of the United States wrote to me, and I can't wait to show it off."

Even the president can't change everything, but he still took the time to pen a heartfelt response to one of his most vulnerable constituents. It's something that no American should forget.