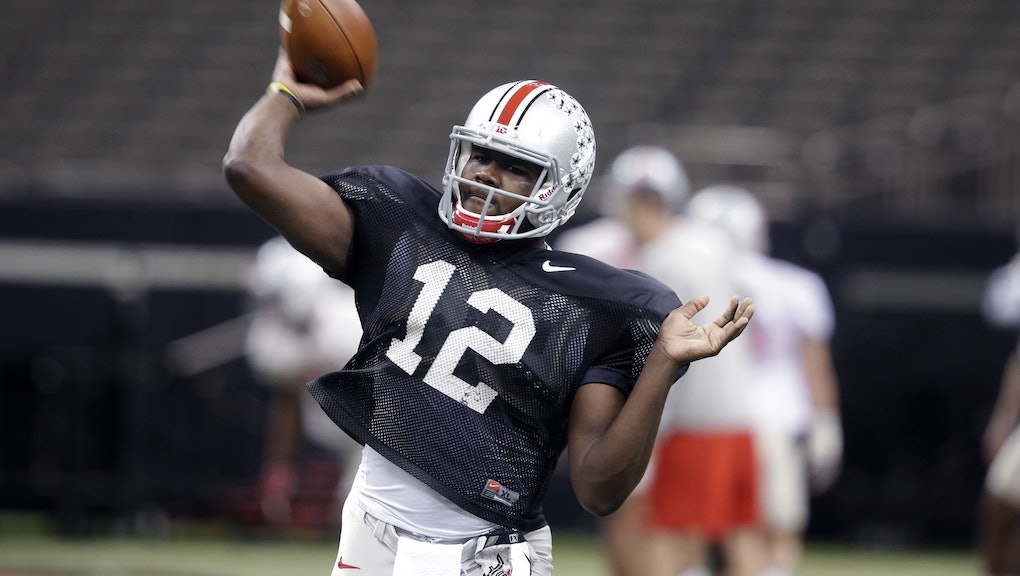 It's a millennial's worst nightmare: Everyone's making fun of something you tweeted years ago.

For Ohio State University quarterback Cardale Jones, set to start in Thursday's NCAA playoff game against the University of Alabama, that tweet just happens to have been published on the front page of the New York Times.

Jones' tweet was roundly mocked when it was sent (and then deleted) back in 2012 (this NCAA athlete doesn't even want to take classes?!). Now the New York Times is using it to illustrate a big story about the business of college football, with its billions of dollars in revenue and its not-too-secret lack of regard for classes. Jones' newfound prominence, thanks to his team's quarterback injury problems — this is only his second career start in college — has dragged his ill-timed complaint back into the limelight.

There's a problem: Laughing at and blaming college athletes for not doing well enough in school is commonplace, especially when their academic indiscretions enter the news cycle like this one has. But chastising the "dumb jocks" ignores (or celebrates) underlying racial issues and lets schools and the NCAA off the hook. It also preserves the myth of the college athlete as some privileged celebrity in order to exploit college students for their athletic prowess.

College football can generate tens of millions of dollars in revenue each year for an individual school, not to mention the extra attention and fame that can come from having a successful football team. Big-time schools want the best athletes, and they want them focusing on football. This a sort of salutary neglect as to how many classes athletes take, what they major in and how they stud — if at all.

In some well-documented cases, it leads to institutionalized cheating and academic fraud. One such scandal unfolded at the University of North Carolina this year, when it was revealed that athletes were essentially taking fake or artificially easy classes to stay eligible. The lasting viral image was a snapshot of a student essay on Rosa Parks, said by ESPN to earn an A-.

The image got passed around because it made an easy target — people could laugh at the UNC athlete's inability to write or be outraged about his lack of education. Even setting aside that it wasn't exactly an essay and didn't really earn an A-, onlookers were tearing down college athletes rather than UNC, which put the system in place, or the NCAA, which sets out to police this sort of thing.

Why it matters: Many can't accept that Jones' tweet is true — many athletes don't come to play school. But that's because it's the way schools prefer things. Big-time athletes have some privileges most other college students don't — they get scholarships, housing, social clout and in some cases special treatment from local law enforcement.

A group of young, mostly black teenagers and young men, though, are not some privileged class. They generate millions for their schools despite receiving no money in return, with the occasional life-altering injury to show for it. Taylor Branch's seminal 2011 feature for the Atlantic, titled "The Shame of College Sports," called the argument that scholarships are adequate compensation "worse than self-serving":

"It echoes masters who once claimed that heavenly salvation would outweigh earthly injustice to slaves. In the era when our college sports first arose, colonial powers were turning the whole world upside down to define their own interests as all-inclusive and benevolent. Just so, the NCAA calls it heinous exploitation to pay college athletes a fair portion of what they earn."

If you think classes and grades should be emphasized more in big-time athletics, that's pressure you should put on the schools and the NCAA, not the teenagers who showed up to play sports and did what they were told. We don't need more young black men being called lazy and ignorant, as if them playing quarterback makes that sort of stereotyping OK.

And you know what? Sometimes classes are pointless, and sometimes college is frustrating and young people take to social media to vent. Bless Cardale Jones for telling the truth. We couldn't handle it two years ago, and maybe we still can't today.