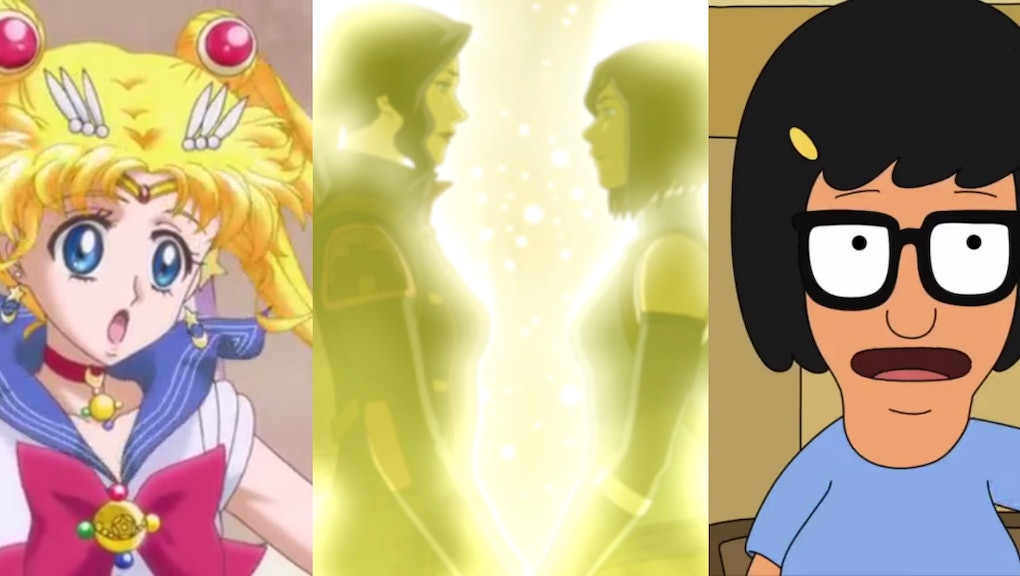 It Was a Groundbreaking Year for Women In Cartoons

Let's all raise a glass to the innovative animated ladies out there.

Although the world of cartoons is only limited by the imagination, many series struggle when it comes to portraying interesting women. Early cartoons offered one-dimensional characters that fulfilled gender role cliches: Think of The Flintstones' Wilma and Betty, Scooby Doo's Daphne and Velma or The Rugrats' Angelica. They're all either domestic sidekicks or overbearing nags. More recently, cartoon creators have helped remedy the debacle with the girl power of Kim Possible and The Powerpuff Girls.

But this past year, the countesses of cartoons finally got the complexity they deserve. We're inching toward a larger gamut of female protagonists who better represent the multiplicity of womanhood. Thanks to shows like Sailor Moon Crystal, Bob's Burgers and The Legend of Korra, female cartoons this year were more subversive than ever, cutting down stereotypes left and right.

Consider the much-anticipated return of Sailor Moon in Sailor Moon Crystal, a series that shows how heroes can fight evil while feminine. Most action series for kids feature a co-ed group with men as the leaders, such as Justice League or Power Rangers. But the Sailor Moon franchise shows that not only can women save the day, but they can lead themselves (even if they do, admittedly, get into the occasional cat fight). They are femme fatales that represent a spectrum of female characteristics, from Sailor Mercury's short hair and sharp intellect to Sailor Mars' dark locks and fiery disposition. Their male ally, Tuxedo Mask, is regularly depicted as the "damsel in distress," leaving the Sailor Scouts to save him. Sailor Moon Crystal flips gender roles and shows that women can be a force to reckon with when defeating evil; it's playing now on Hulu with English subtitles.

Furthermore, the series is known for its iconic relationship between Sailor Uranus and Sailor Neptune (although their romantic love was disguised as the love between cousins when the anime was brought to the United States in the '90s). The characters haven't been introduced yet in the reboot, but it's a safe bet that Hulu won't cover up their love. In that case, Sailor Moon Crystal can add lesbian love to its list of stereotype-defying choices, making it one of the most revolutionary shows in the landscape of present-day cartoons.

But the biggest breakout star in cartoons this year was butt-loving, totally awkward Tina Belcher from Bob's Burgers. The animated show, which follows a burger joint owner, his wife and their three kids, has been around since 2011. In 2014, however, eldest sibling Tina Belcher was voted as the best character on TV in an Entertainment Weekly poll. She's a smart, sensual woman who beat out the likes of Arya Stark and Sherlock Holmes for the crown.

"Popular" is a term that has thankfully been going through a redefinition, but it typically takes the form of a beloved blond bombshell. If Tina, the direct descendant of MTV's cynical Daria, proved anything, it's that outcasts and misanthropes often make for more accessible, creative narratives. The Daily Dot writes on Ms. Belcher's fame: "Tina's awkward, budding sexuality isn't just funny and relatable: It's essential." Many people will see some version of themselves in the teenage Tina. Having a cartoon character that is more recognizable than fantastical subverts what the world of animation has been about for so long. And that's a positive change.

Legend of Korra established itself as one of the most groundbreaking cartoons with its representation of both multifaceted women and fluid sexuality. Heroine Korra fights against evil, just like the Sailor Scouts, but she's more muscular, less feminine and a woman of color. This past season, her main antagonist, Kuvira, isn't just a cookie-cutter villain hell-bent on world destruction. She's a complex woman who had a rocky upbringing and found stability through military work; in the series, she aspires to bring that stability to a land plagued by chaos through any means possible. These two women's stories are compellingly written and given the spotlight, which is a stark contrast to most cartoons that throw females aside in plot lines.

Additionally, older women in the series proved to be some of the strongest around. Often, elders on television are cornered into the archetype of gentle and wise. But the gray-haired Lin and Suyin Beifong are unafraid to enter the fray, and many times they were the ones carrying the fight with their abilities. Their maternal and protective instincts are displayed through elegant strength against those who endanger the ones they love.

And in the last scene of the show, bisexuality was presented in a refined and accessible way for what started out as a children's cartoon. Korra and longtime friend Asami join hands and embark on a new journey in the last minutes of the series. The two developed a connection that surpassed friendship over the show's seasons (and they even dated the same guy at different times). Queer identities are almost never showed in cartoons, let alone on Nickelodeon. This was a momentous occasion and a leap toward showcasing non-heterosexual love in children's entertainment.

While animation can whip up whatever the mind can daydream, it's important that various forms of womanhood are represented in those visions. 2014 saw a move toward progress, with the women in cartoons matching what we see in real life. Hopefully, next year we'll see an even more complex and realistic portrayals sketched out.