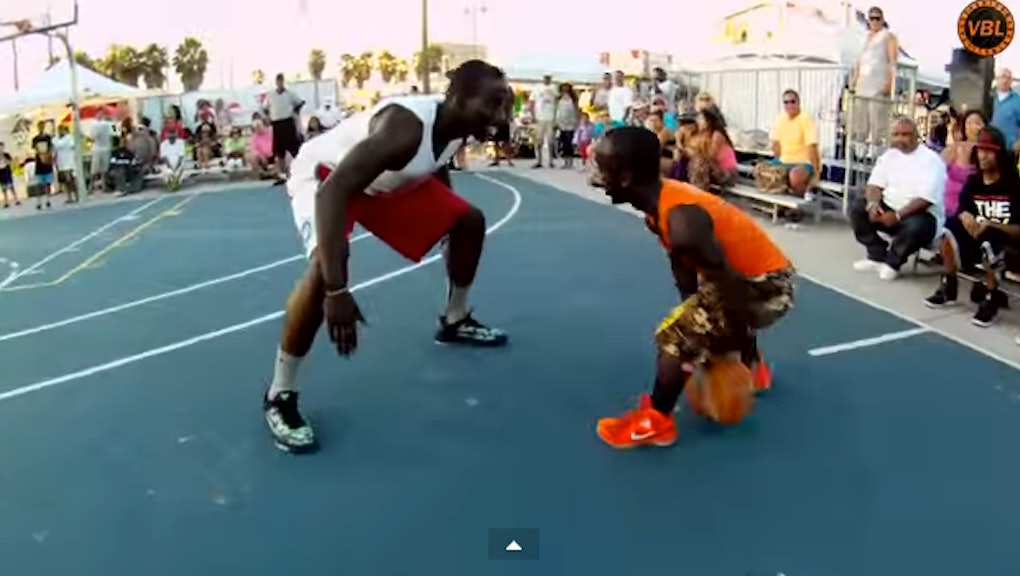 The average height for an American professional basketball player is 6 feet, 7 inches. Since the game was invented over a century ago, being tall has been more or less synonymous with being successful — or at least a key prerequisite.

That means the odds are stacked against Jahmani Swanson. At 4 feet, 5 inches, the New York City native seems ill fitted for a game where short limbs and a limited vertical leap are viewed as liabilities.

Until you see him play:

Over the past few days, outlets ranging from the Mirror and Grio to the Huffington Post have hailed Swanson as the "Michael Jordan of dwarf basketball." His ball-handling skills and uncanny ability to maneuver through defenders nearly 2 feet taller have made him a force on the court — and something of a celebrity in the sports world.

"I meet a lot of celebrities at games and charity events because I always get invited because I am well know for my videos," the 29-year-old told the Mirror. "I had my photograph snapped with David Beckham who told me he was a huge fan."

Swanson played most recently for the New York Towers, a local city team comprised entirely of little people, using sport as a vehicle to educate, inspire and "positively affect ... the way [they] are viewed in society."

It's important work. As Mic's Eileen Shim points out, the harassment, discrimination and general disrespect leveled at people with dwarfism, the genetic condition that causes Swanson's short stature, remains in stark contrast to the increasingly prominent role of little people in popular culture, as evidenced in shows like Little People, Big World and Game of Thrones.

Not to mention the added physical will required for them to play a game as gruelingly athletic as basketball. According to the Little People of America organization, some types of dwarfism can result in painful orthopedic complications, such as spinal stenosis — where the spinal chord is too small to accommodate the spinal column — followed by the medical recommendation that little people stick to  non-contact sports like swimming and cycling.

None of this has stopped Swanson from excelling at the game he loves.

His passion and talent have also inspired many people around him — including his own family.

"He taught me how to play basketball," his younger brother, Justin Thompkins, tells Bancroft TV. "He's my role model. I do aspire to be just like my brother."

"I'm very proud of him, he's very inspirational to a lot of people," adds his mother, Sabrina Swanson. "Even to me."

In a game where extraordinary premiums are placed on height and pure athleticism, it's impressive and important to see people who don't fit the typical basketball player physicality succeeding. Swanson is a prime example.

"I tell kids what I have overcome and say to them that they can achieve it too," he says. "It's the kid who may have one hand who is told he can't play, and then he sees me and knows he can do it."