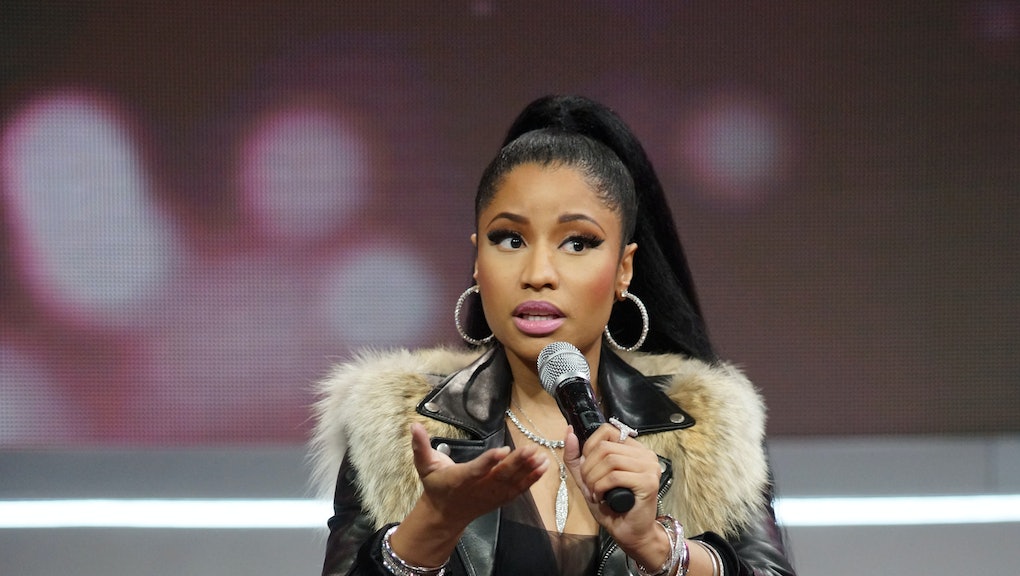 In the past few months, the hip-hop community has exploded with social commentary on our culture's lingering systemic racism. Azealia Banks, Killer Mike, Talib Kweli, J. Cole and scores of rappers have all spoken out. But Nicki Minaj has been predominantly focused on her music — until now.

In a recent cover story with Rolling Stone, she offered a searing perspective on police brutality and race in America.

"I've been reading so many people saying, 'Why are we surprised?' That's what's really sad, that we should somehow be used to being treated like animals. It's gotten to the point where people feel like there's no accountability: If you are law enforcement and you do something to a black person, you can get away with it."

In her interview, which will hit newsstands on Friday, Minaj encouraged other black celebrities to come forward and speak on racism and police brutality. But she also notes how the media twists black voices, pointing out the strong negative reaction to Kanye West's stance against George W. Bush following Hurricane Katrina.

"People say, 'Why aren't black celebrities speaking out more?'" she said. "[Kanye] was the unofficial spokesman for hip-hop, and he got torn apart, and now you haven't heard him speaking about these last couple things, and it's sad. Because how many times can you be made to feel horrible for caring about your people before you say, 'Fuck it, it's not worth it, let me live my life because I'm rich, and why should I give a fuck?'"

Minaj's commentary is more essential now than ever. Whether or not rappers have an obligation to speak on black issues has been a major point of contention within the hip-hop community in recent weeks. White rapper Iggy Azalea recently got torn apart for engaging in a Twitter beef with Azealia Banks. Banks accused Azalea of co-opting black sounds and styles, but not speaking on black issues. Azalea claimed that rap doesn't always need to be political, which pissed off a lot of hip-hop's most dedicated supporters, including Queens-born legend Q-Tip, who took to Twitter to give her a hip-hop history lesson. He traced the genre's roots back to its beginnings in the Bronx as an outlet for black frustrations:

Minaj, in a recent interview, seemed to agree with Q-Tip. She bemoaned the fact that the genre is losing the sociopolitical power it had at its inception.

"I feel like when Public Enemy were doing 'Fight the Power,' we as a culture had more power — now it feels hopeless," she said.

In many ways, Minaj has contributed to this gradual reduction of hip-hop's revolutionary power: She is one of the foremost leaders in making chart-topping pop hip-hop, but "Superbass" hardly qualifies as political. She and Iggy Azalea are two of the most successful rappers today who weren't necessarily pulling their weight paying homage to their art's roots. But with all these insightful, conscientious statements, Minaj has separated herself from Azalea firmly. Minaj has proven that artists can make poppy, danceable rap music and still respect the genre's radical sociopolitical roots.

And this is extremely important, because as much we might like to see mainstream rap become more substantive, it's not likely to change any time soon. Minaj is the kind of pop rapper we need heading into 2015. Because of her pop appeal, she actually is in a position to spread political consciousness further than other explicitly political rappers. Because her music has wide appeal, she can use her platform to reach those who may not normally seek out political insights.

Minaj is doing her part. Let's hope the rest of the pop hip-hop community comes around soon.