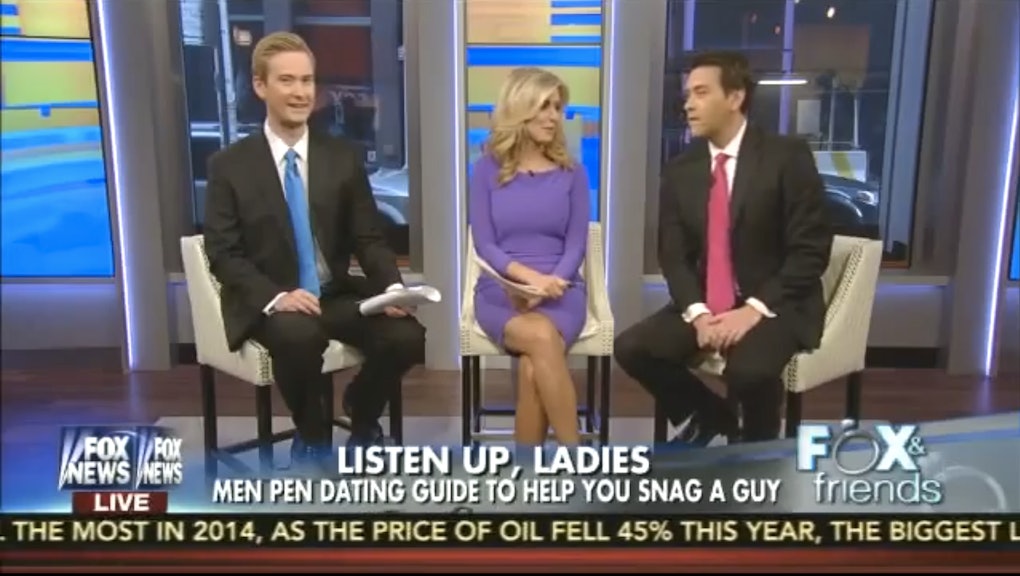 The hosts of Fox & Friends added to the network's sterling record of disparaging women by offering up a fresh batch of 1950s-era sexism Thursday.

During a segment on Single Man, Married Man, a new book about dating advice written by men, the three broadcasters shared a hearty chuckle about the gems found from the book.

"Ladies, we're talking to you. If you still don't have a New Year's resolution, could this be it?" co-host Clayton Morris began. He was referring to this prominent bit of advice from the book: "No matter where a woman was in life, she should always be able to cater to her man's needs."

Co-host Ainsley Earhardt chimed in, noting that she did "want to be a better wife." The next bit of guidance came in the form of some good old-fashioned narcissism: "When he gets his ego stroked, he'll be more inclined to love you more."

"That's true!" Earhardt said. One way to do this? "Prepare his meals, draw him a bath and massage his feet every now and then."

While co-host Peter Doocy seemed a tad suspicious of the advice, Morris appeared to be all for it. "My wife is at home taking notes right now," he said. "Absolutely. She already does cook meals. She's a fantastic cook!"

The show even uploaded this helpful illustration to its Facebook page:

While the sure-to-be literary masterpiece itself might be the most offensive part of the muddled segment — it suggests "someone has to wear the pants and someone has to wear the skirt" and that men feel more guilt over changing barbers than over cheating on their partners — the Fox & Friends crew couldn't find much time to point out these problems.

"My wife does cook, and she does give me foot massages," Morris said.