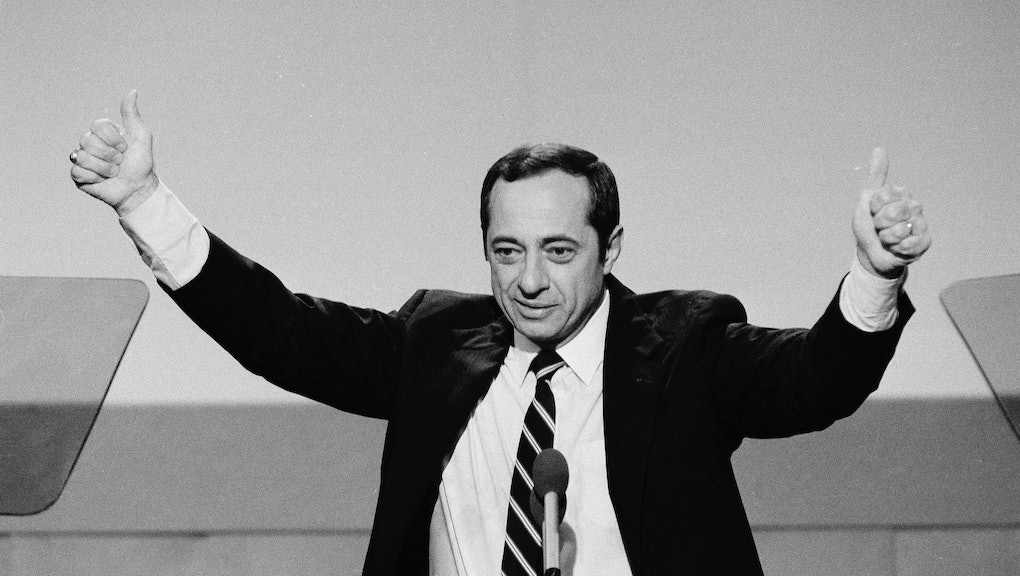 Former New York Gov. Mario Cuomo died Thursday at age 82, hours after his son Andrew Cuomo was sworn in for a second term in the office his father commanded from 1983 to 1994.

For a generation of New Yorkers, Mario Matthew Cuomo was the popular Democratic governor making headlines as a potential presidential candidate — he never ran, despite the rumors — and fighting legislators who wanted to reinstate the death penalty in New York. He vetoed their efforts in each of his 12 years in office.

Nationally, Cuomo was the rare liberal icon to emerge from the Reagan years. He was former President Bill Clinton's first choice to fill a U.S. Supreme Court seat in 1993, but eventually passed on the offer. Ruth Bader Ginsburg, a fellow New Yorker, got the nomination and the job.

Cuomo's legacy as a powerful and eloquent speaker — especially when making a rigorous case for, at the time, mostly out-of-favor liberal ideals — is unquestioned. Two speeches, delivered in an 8-week span during the summer of 1984, sealed his place in the progressive political canon.

The first came on July 16 at the Democratic National Convention in San Francisco. President Ronald Reagan, running for a second term that year, had long called the U.S. a "shining city upon a hill." On this date, Cuomo flipped the script, giving voice to those the 1980s had left behind. The country was, he said, really more a "tale of two cities."

"Ten days ago, President Reagan admitted that although some people in this country seemed to be doing well nowadays, others were unhappy, even worried, about themselves, their families, and their futures. The President said that he didn't understand that fear. He said, 'Why, this country is a shining city on a hill.' And the President is right. In many ways we are a shining city on a hill.

The speech made Cuomo a national political star. He was also the country's most respected living Catholic politician. This posed what at the time seemed like an irreconcilable internal conflict: How could Cuomo, who said he personally opposed abortion, be a real advocate for a woman's right to choose?

On Sept. 13, 1984, Cuomo visited the University of Notre Dame in South Bend, Indiana, to address the school's Department of Theology. His speech, "Religious Belief and Public Morality: A Catholic Governor's Perspective" would reset the terms of the debate.

Some highlights from Cuomo's remarkable lecture are below. You can watch the whole speech here.

"The acceptance of this faith requires a lifelong struggle to understand it more fully and to live it more truly, to translate truth into experience, to practice as well as to believe.

Cuomo also discussed the Church's willingness to "[abide] the civil law as it now stands," effectively accepting divorce and birth control. Not so for abortion. "Abortion," he said, "is treated differently."

"Of course there are differences both in degree and quality between abortion and some of the other religious positions the Church takes: abortion is a 'matter of life and death,' and degree counts. But the differences in approach reveal a truth, I think, that is not well enough perceived by Catholics and therefore still further complicates the process for us. That is, while we always owe our bishops' words respectful attention and careful consideration, the question whether to engage the political system in a struggle to have it adopt certain articles of our belief as part of public morality, is not a matter of doctrine: It is a matter of prudential political judgment.

Finally, Cuomo makes the pragmatic argument, one that applies as much today as it did 30 years ago.

"Respectfully, and after careful consideration of the position and arguments of the bishops, I have concluded that the approach of a constitutional amendment is not the best way for us to seek to deal with abortion.

Mario Cuomo was a religious man and an intellectual, a hardscrabble politician and a gifted statesman. He was New York's governor for more than a decade. His legacy will carry on much longer than that.