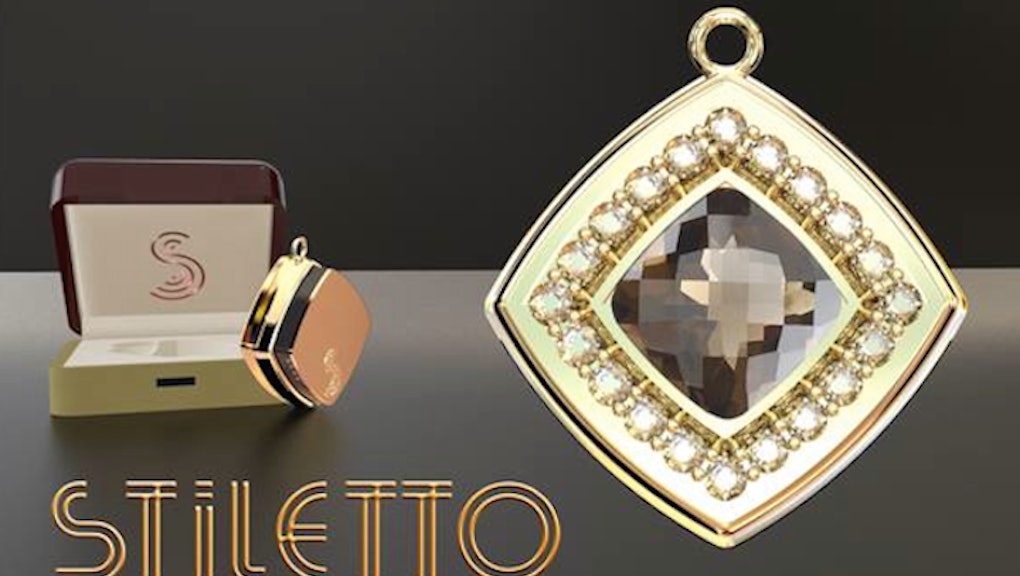 The latest in wearable technology, Stiletto by Secure Couture, is being touted as "seriously smart personal security" perfect for women at risk of stalking, domestic violence or rape. It alerts your friends, family and 911 if you're in distress, thanks to an amalgamation of high-tech features contained in the jeweled charm of your choice. The idea is to send for help in the moments directly preceding a violent encounter, theoretically hastening emergency services.

It's an undoubtedly creative and well-intentioned concept, but like other preventative products on the market, it does nothing to challenge the root cause of sexual violence: rapists.

"A" for effort. Secure Couture certainly deserves commendation for its acknowledgment of the pervasive nature of violence against women, as well as its outside-the-box approach to doing something about it. But it continues to place the onus of preventing assaults squarely on women.

This strategy of teaching women how to avoid getting raped is, unfortunately, as ubiquitous as rape itself.

As Mic's Elizabeth Plank previously noted, "However well-intentioned, there seems to be an awful lot of resources, time and energy dedicated to telling women how not to get raped, and comparatively little going to preventing men from raping in the first place. This provides women with a false sense of comfort and the illusion that a product or a precaution can actually solve the problem of rape, which it won't."

What's more, in Stiletto's case, this feeling of comfort is actually only available to a privileged few. The jewelry's price points — the most basic charm starts at $179, according to its website — immediately and definitively exclude lower-income women.

Secure Couture, however, objects to this characterization, and said it is working toward the broader goal of education. The company told Mic through a spokesperson that Stiletto is affiliated with the The National Center on Domestic and Sexual Violence and donates subsidized products and services to those who need this technology, but can't afford it. It also supports educational initiatives directed at preventing people from perpetrating these crimes.

"We advocate for, and also donate to, several initiatives directed at educating men," the spokesperson noted. "We believe that doing both is what truly sets us apart. We don't see the harm in offering people quick and capable access to 1 touch 911 services and advanced location capabilities. This wasn't made for a political purpose, it was made to improve safety in situations where education or other means have failed."

A trip down memory lane. Of course, Secure Couture isn't the first company to roll-out products aimed at helping protect women from sexual assault. There is, as feminist writer and activist Soraya Chemaly told ThinkProgress in September, an "entire little cottage industry of anti-rape solutions" that may be leading to a "commodification of sexual assault."

As with Secure Couture, these products are mostly well-intentioned and have certainly helped jumpstart much-needed conversations about how we can address sexual assault in a modern, technologically-savvy society. But ultimately, rape isn't a game that can be outsmarted by apps and special nail polish. It's a societal problem caused by power and gender dynamics.

The takeaway? There is no immediate harm in technology intended to speed emergency response times. But women — and men — ultimately need to decide what strategies are most effective when it comes to substantive ways of preventing sexual assault. A good start would be focusing on addressing the root causes of it, and ensuring that the legal system is built to empower, not blame, victims.

Correction, Jan. 5, 2014: An earlier version of this article incorrectly listed the price of one charm as $350. The text has also been updated throughout to reflect comments sent to Mic from Stiletto Couture.