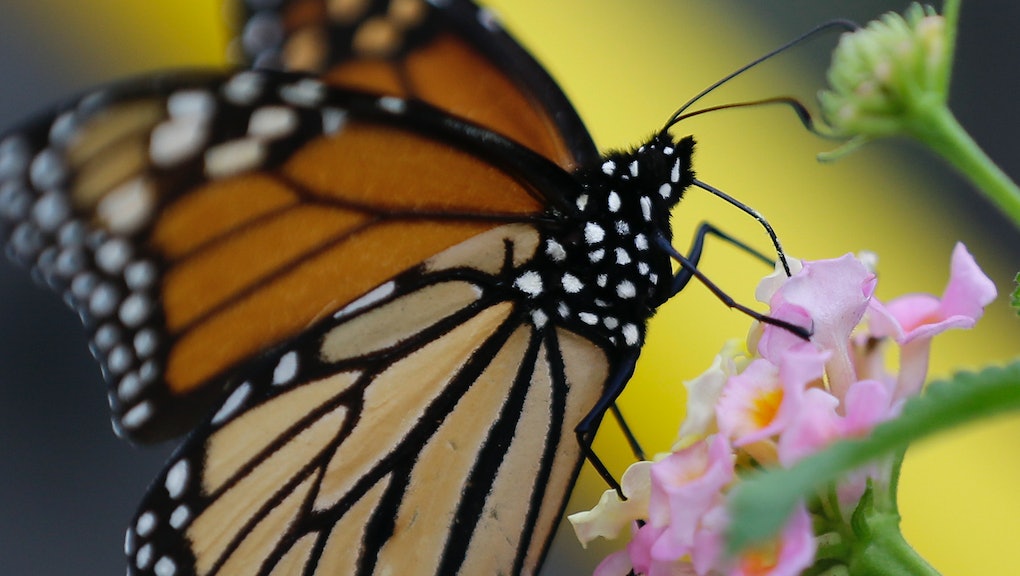 This Beautiful Butterfly May Be Headed to the Endangered Species List

Monarch butterflies are some of the best-known visitors to gardens across the country — although if we don't take drastic steps, these iconic insects may soon stop fluttering by.

While exact numbers are hard to come by (how would you like to count all the country's butterflies?), the population of monarch butterflies in the U.S. has gone down by as much as 90% over the past 20 years. In response, the U.S. Fish and Wildlife Service announced a yearlong study to determine whether the species will be placed on the endangered species list.

It's not just a publicity stunt — officially labeling the monarch an endangered species would introduce a host of new protections to try and bring its numbers back up.

The background: As Vox explains, the questions surrounding the Monarch's disappearance are based around the species' annual migration to Mexico in the wintertime. Each year, fewer insects are making the trip.

That could be because they like to lay their eggs in milkweed, which caterpillars feast on after hatching. Turns out milkweed has been in decline, and herbicide use in the Midwest may be to blame. The number of milkweed plants fell 21% between 1995 and 2013, according to Vox, and about 70% of that decline was focused in agricultural areas. Advocates say the solution is simple: More milkweed means more butterflies.

Moving forward: Getting the monarch listed would likely lead to herbicide restrictions for farmers in order to get milkweed populations up. The government might encounter resistance from farmers, but that's been the norm for species protected under the act.

There are other, smaller ways to try and help. Advocacy group Monarch Watch has instructions for growing your own milkweed, and you can even nurture a monarch chrysalis of your own — a beautiful way to personally contribute to one of America's natural wonders.