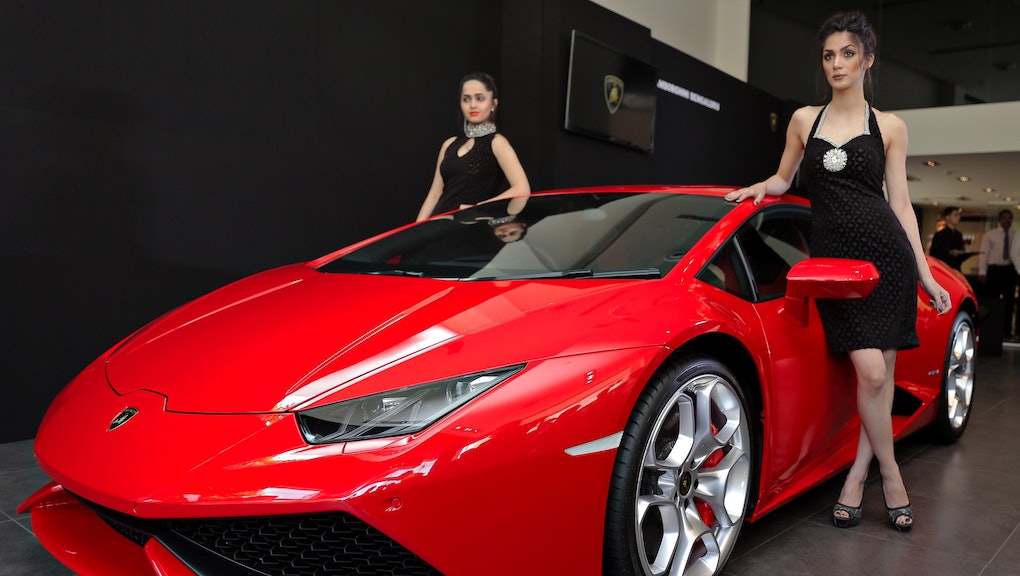 This Terrifying Chart Shows the Unstoppable Rise of the 0.1%

Forget the 1% — the real winners of the post-collapse economy are America's top one-thousandth.

Using data gleaned from tax returns to estimate the distribution of household wealth in the United States since 1913, economists Emmanuel Saez, of UC-Berkeley, and Gabriel Zucman, of the London School of Economics, have determined that the top 0.1 percent of American households control more than 22% of the nation's wealth. Or, in layman's terms, one-thousandth of the country controls one-fifth of the wealth:

Notice anything terrifying? That U-shaped curve showing the rocket-ship acceleration of wealth accumulation by the top 0.1 percent is on the verge of breaking a record dating back to 1929. Yes, that 1929, when the economic Jenga tower created by deregulation, economic imbalances and overexuberance about the strength of the market came toppling down.

According to Saez and Zucman, "wealth concentration has followed a U-shaped evolution over the last 100 years: It was high in the beginning of the 20th century, fell from 1929 to 1978, and has continuously increased since then." The recent rise of wealth inequality is "almost entirely due to the rise of the top 0.1% wealth share, from 7% in 1979 to 22% in 2012 — a level almost as high as in 1929."

What's causing it? According to the economists, the increase in wealth concentration at the top of America's economic pyramid is due to a surge of top incomes combined with an increase in inequality of savings — the wealthy are being paid more (or earning more from their investments) and the poor aren't able to save.

Even the rich aren't benefitting as much from this wealth concentration as the super-rich. "Income inequality," Saez and Zucman write, "has a snowballing effect on the wealth distribution: Top incomes are being saved at high rates, pushing wealth concentration up; in turn, rising wealth inequality leads to rising capital income concentration, which contributes to further increasing top income and wealth shares."

But this is what capitalism does, right? If the ultra-wealthy are worth that much, the idea goes, it's just a fair valuation of their contributions to the market. But rocketing compensation and increased concentration of wealth in the stock market aren't necessarily an indicator of performance. According to the AFL-CIO, the CEOs of S&P 500 Index companies made, on average, $12,259,894 in 2012, or 354 times that of the average rank-and-file U.S. worker. Meanwhile, in Japan, the average CEO earned $2,354,581 in 2012, or 67 times what his or her average worker earned.

Alan Mulally, the former CEO of Ford who retired in July, received $23.2 million in compensation for 2013 — that's more than what the CEOs of Honda, Toyota and Nissan earned combined, and, fairly obviously, not performance based.

Without a fix, this hyperconcentration of America's wealth, an ouroboros of structural inequality feeding on itself, points to a 21st century return to the so-called "Gilded Age," when dynastic wealth inherited over generations formed a thin gilding of the disastrous social problems that propped up the system. With progressive taxation, including on wealth earned through investment, and reinstatement of the banking regulations that kept major depressions at bay for nearly a century, the course may be altered before the U.S. economy goes completely feudal. Maybe.