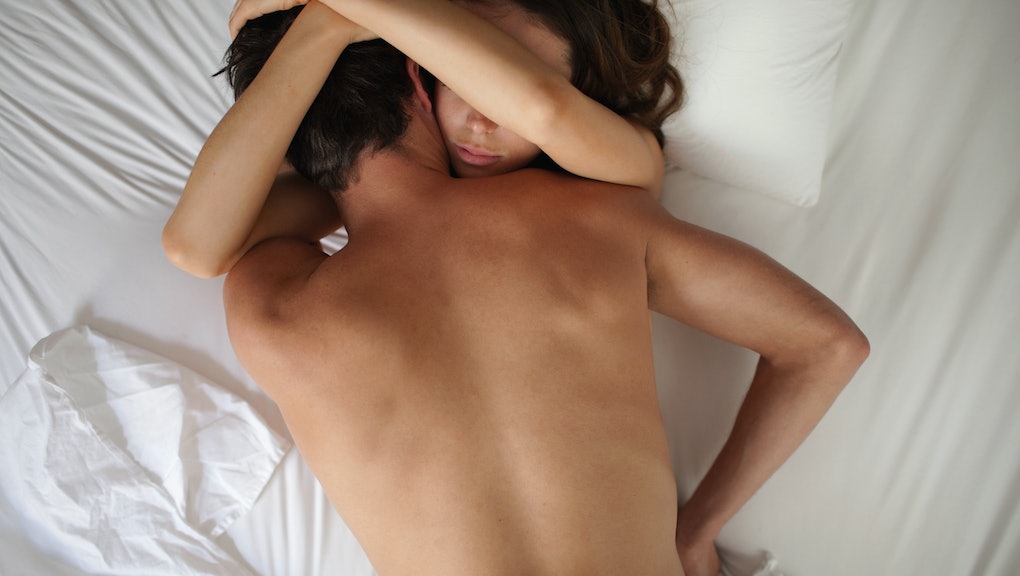 The simple solution? If you want to improve your bedroom moves, the best guidance is likely to come from the person you're trying those moves on. Because no matter what your gender, orientation or chosen partner, the key to good sex is learning from your partner what they want — not trying to mimic a move that's been staged anyway.

Moreover, studies by Marta Meana, president for the Society of Sex Therapy and Research, have found that being desired is the source of a woman's desire. Foreplay is the perfect time to illustrate this desire. As certified sex therapist and Psychology Today columnist Sari Cooper told Women's Health, "Heading straight to the clitoris gives [women] a less pleasurable orgasm than if your partner touches, caresses or massages other parts of your genitals before he hones in on that hot spot."

Use lube. Really, do it.

A 2010 study found that participants who used lube reported "significantly higher" levels of sexual pleasure. Another study (released by Trojan Lubricants, it should be noted) found that 82% of users report experiencing more pleasure when they lube up. Happily, a separate survey found that plenty of men and women are using it, which is great news.

Even if you're not having sex, using lube on the clitoris will create a slippery sensation that allows fingers to slide over the clitoris instead of tugging. Speaking of which...

Orgasms don't happen right away — or at all.

Many women can't get off from vaginal intercourse alone.

Even twenty minutes likely isn't enough if you're relying on penetrative intercourse alone. The National Survey of Sexual Health and Behavior from Indiana University found that women tend to require a variety of sexual acts to achieve orgasm, and studies show that most women have a hard time coming from typical penis-in-vagina sex.

A comprehensive analysis of more than 33 studies from the past 80 years, gathered in the book The Case of the Female Orgasm, revealed that only 20% to 25% of women reliably experience orgasm during penetrative intercourse — no matter how long it lasts, the size of the man's penis or the woman's mental state.

But orgasming isn't the be-all and end-all, anyway.

Many women have anxiety about reaching orgasm or taking too long, which only makes an orgasm more difficult to achieve. But this doesn't mean they don't enjoy the sex.

As Debby Herbenick, author of Sex Made Easy, told Bustle, "In order to stay present during sex — a key component to orgasm for women — if something feels good, just keep at it." Steady strokes are more likely to pleasure a woman than positions with yoga class-style flexibility tests. If you are looking to mix things up, there are positions you can try that are most likely to stimulate female orgasm.

Since vaginal intercourse isn't likely to result in orgasm alone, the various factors impacting P-in-V sex aren't necessarily important for pleasure. In other words, a bigger penis isn't always better; neither is ramming away for 45 minutes.

Plus, since the key to women's pleasure isn't penis-in-vagina intercourse but direct clitoral stimulation, penis size is far less important than the skilled use of fingers and tongues, or knowledge of sex toys. Plus, it could be duration of the foreplay that matters most anyway.

Not all women enjoy oral sex — giving or receiving.

While it's probably not surprising that not all women enjoy giving blow jobs (though some do), what may be more surprising is that receiving oral sex doesn't do it for all women either. As Gabrielle Moss wrote for Bustle, "It simply doesn't do anything for me... Some of us just don't respond physically to the subtle physical pressure provided by oral sex."

When stimulating the clitoris, for example, research has found that women are most likely to reach orgasm with a diagonal stroke. However, different women have different preferences. You can trace circles around the clit, rub it with any variety of fingers, stroke it over underwear or even experiment with tapping or gentle flicking.

Once you find the stroke that your partner enjoys most, keep the pace and pressure steady. While men often speed up or thrust harder closer to orgasm, women usually need steady pressure to come. But ultimately, getting a woman to come might not even be the goal of the night. What is? Just ask her.

Not all talk has to be dirty.

Because when it comes down to it, communication might not sound like a sexy concept, but it's the key to the best sex. Just ask the woman you're sleeping with.