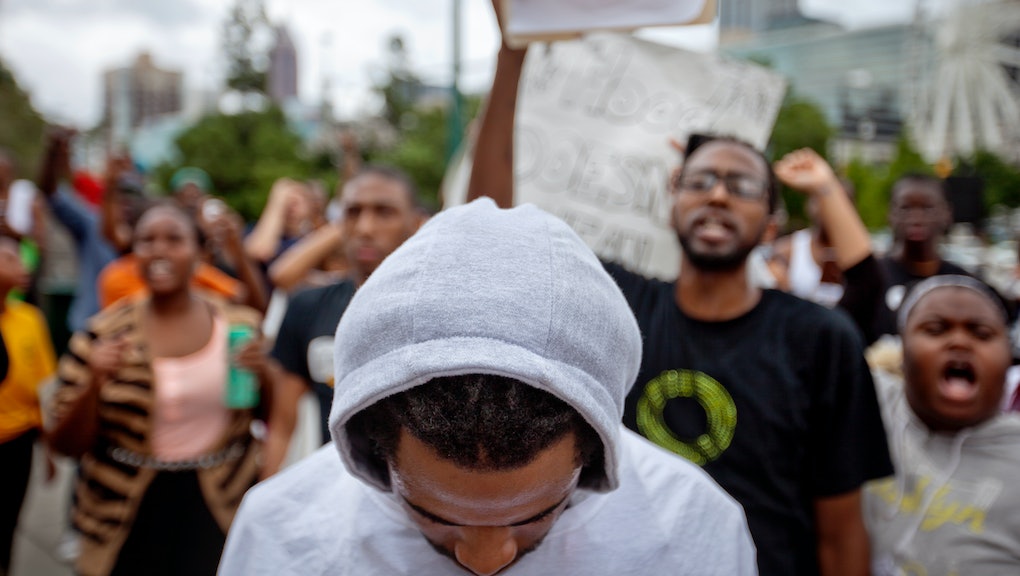 In the Sooner State, right-wing lawmakers are pushing a vile response to the ongoing debate over race, crime and police killings across America: Ban hoodies.

A new law proposed by Republican state senator Don Barrington called Senate Bill 13 would enable police to issue tickets of up to $500 to people attempting to conceal their identity in public "by means of a robe, mask or other disguise." It also opens the possibility that violators could be subject to "imprisonment in the county jail for a period of not exceeding one year."

The penalties would apply to anyone caught wearing such concealing clothing during the commission of a crime, or much more troublingly, to anyone identified as attempting to remain anonymous in public, a broad and vague descriptor that experts believe could lead to various problems.

The law: According to Oklahoma's KOTV, the bill came about after lawmakers received complaints about robberies committed by men wearing hooded sweatshirts. "Oklahoma businesses want state leaders to be responsive to their safety concerns, and this is one way we can provide protection," Barrington said.

KFOR-TV reports that the law has exceptions for "religious garments, protection from weather, parades, Halloween celebrations and numerous other circumstances" such as "minstrel troupes" and sporting events. In other words, it's a GOP-approved list of when you can wear your hoodie without getting harassed by the cops.

Critics are calling it what it is: A pretext to harass minorities at a time when race relations are already bad across the country. "This is about the pretext of being able to stop young African American males," CNN legal analyst Sunny Hostin said of a similar ban at an Indiana mall. "Hoodie is code for 'thug' in many places ... the 14th Amendment protects us from this."

Oklahoma attorney James Siderias told KFOR-TV, "I think this is a violation of an individual's right to chose what they want to wear as long as it doesn't violate the realm of public decency and moral values, and I think this could be very problematic." A man named A.T. added that, "It probably will be a reason for cops to mess with more people wearing hoodies."

According to Time, 10 states already have similar laws on the books.

Why you should care: As Wonkette's Beth Ethier notes, it's pretty hard not to tie Senate Bill 13 to the well-documented trend of right-wing pundits and lawmakers who think the debate on racial profiling should focus on why so many black people wear hoodies anyhow:

Oklahoma's proposed ban would allow cops and overly suspicious citizens alike greater leeway to harass people who are doing nothing wrong other than fitting a subjective "thug" profile. It would send the message that the same kind of racial profiling that led to the death of unarmed black kids like Trayvon Martin and Michael Brown isn't some necessary component of public safety, but an objective in and of itself. It's difficult to see how giving police the power to indiscriminately target anyone in a hoodie for fines and jail time will do anything to fight actual crime, and it certainly won't challenge the widespread perception that the police are at war with the black community.

Welcome to America, where dressing while black could soon be a crime in Oklahoma.