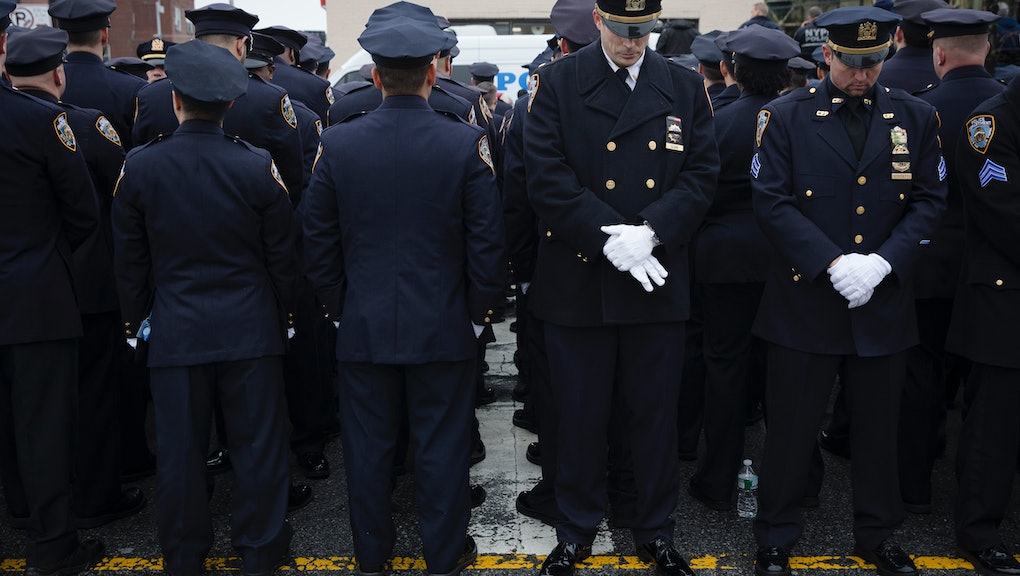 The news: On Sunday, New York City Police Department officers once again turned their backs on New York Mayor Bill de Blasio at a police funeral, with what appeared to be hundreds of police refusing to face him at a ceremony for slain Officer Wenjian Liu.

As de Blasio approached the podium to give his speech, large groups of officers disobeyed direct orders from Commissioner William Bratton not to repeat the identical behavior that occurred during the funeral of Officer Rafael Ramos in December. Bratton, having characterized the protests as having stolen "valor, honor, and attention that rightfully belonged to the memory of Detective Rafael Ramos's life and sacrifice" in a memo to all officers and commanders, probably won't be pleased by images like these hitting the airwaves:

The background: Officer Liu was killed alongside Ramos in an "assassination"-style double murder in December by a man who also shot his girlfriend earlier that day. The shooter had previously alluded to the July 17 death of unarmed Staten Island black man Eric Garner, who said he couldn't breathe 11 times while placed in a chokehold by NYPD Officer Daniel Pantaleo. After a grand jury failed to indict Pantaleo, de Blasio earned the enmity of much of the NYPD after sharing his unease over discriminatory policing and how it might affect his own black son.

The deaths of Liu and Ramos immediately sent the already-tense situation into an outright spiral, with the NYPD launching what outsiders described as a "cop coup." Patrolmen's Benevolent Association head Patrick Lynch said the mayor had "blood" on his hands, while officers launched a citywide work slowdown and turned their backs on the mayor at Ramos' funeral. Police officers and their allies have taken the occasion to smear liberals and anti-racist activists as directly responsible for the officers' deaths.

The New York Times warned that the department was squandering its respect and specifically targeted "the snarling sense of victimhood that seems to be motivating the anti-de Blasio campaign — the belief that the department is never wrong, that it never needs redirection or reform, only reverence." The department's reactionary stance has surely alienated it further from the general public, which Quinnipiac University polls had already indicated was losing the support of citizens.

Why you should care: Despite massive public backlash, the NYPD apparently doesn't think it's made its point yet. Two ruined funerals later, and it's still throwing the equivalent of a giant temper tantrum.

Unfortunately, the purely spontaneous nature of the protests means it's likely a grassroots movement. The NYPD's anger seems here to stay, which should concern the rest of us quite reasonably wondering what such flagrant and public disrespect for the mayor suggests about how those same officers treat the public when no one is looking.