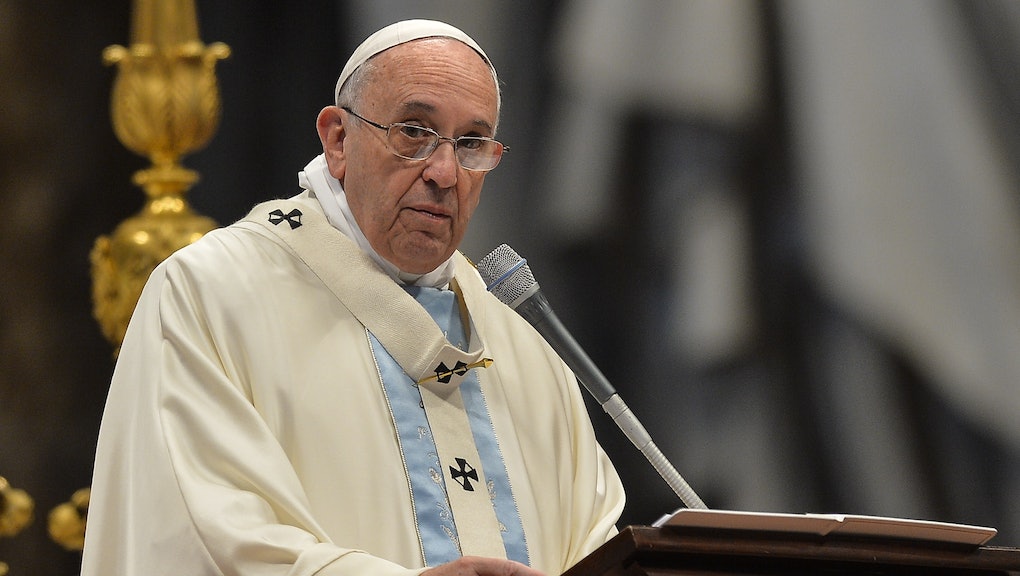 The news: In a sweeping move intended to increase the diversity of the leadership of the Catholic Church, Pope Francis announced his selections for 20 new cardinals on Sunday, and here's the best part: They're from all over the world.

Fifteen of the new cardinals under the age of 80 — therefore eligible to vote for the next pope — come from six continents and 14 countries. They include officials from developing countries such as Ethiopia, Vietnam, Myanmar, Panama, Cape Verde and Tonga. One is from Sicily, where the church has become closely involved with rallying public opposition to the mafia. The New York Times writes that just one of the 15 nominees, Archbishop John Atcherley Dew of Wellington, New Zealand, is a native English speaker.

According to the Los Angeles Times, Pope Francis told a crowd in St. Peter's Square that the new cardinals "show the indelible tie with the church of Rome to churches in the world."

So what? While this might just seem like a mundane clerical announcement, Catholic University of America professor Chad Pecknold told the Wall Street Journal that picking new cardinals is "the most important thing a pope does." And not only that, but by purposely choosing cardinals from around the world, Francis is clearly trying his best to make the church more inclusive and representative of its 1.2 billion members. By selecting this varied cast of cardinals, Francis is helping the church understand that its members are not a bunch of old white European guys, but diverse people from across the globe.

"Francis' pattern is very clear," analyst John L. Allen told CNN. "He wants to go to the geographical peripheries rather than places that are already top-heavy with cardinals."

Additionally, no new cardinals are from the U.S. Time's Elizabeth Dias adds that "the last time the United States did not receive a cardinal for two years in a row was nearly four decades ago."

Francis' move is clearly intended to make the Church more inclusive and worldly, as well as inspire renewed faith and optimism. The Christian Times reported in December that priests worldwide were reporting more Catholics are going to services and confession, and the pope doesn't show any signs of slowing down. His advocacy for the poor, plans to help make climate change a global moral issue and helpfulness in brokering a new era in U.S.-Cuba relations have led to outlets like Gawker jokingly branding him the Cool Pope.

Not only that, but polls have continually demonstrated Francis' reformist attitudes are very popular internationally:

Francis' reforms appear to be having their intended impact: revitalizing interest in the Church. Go pope go.