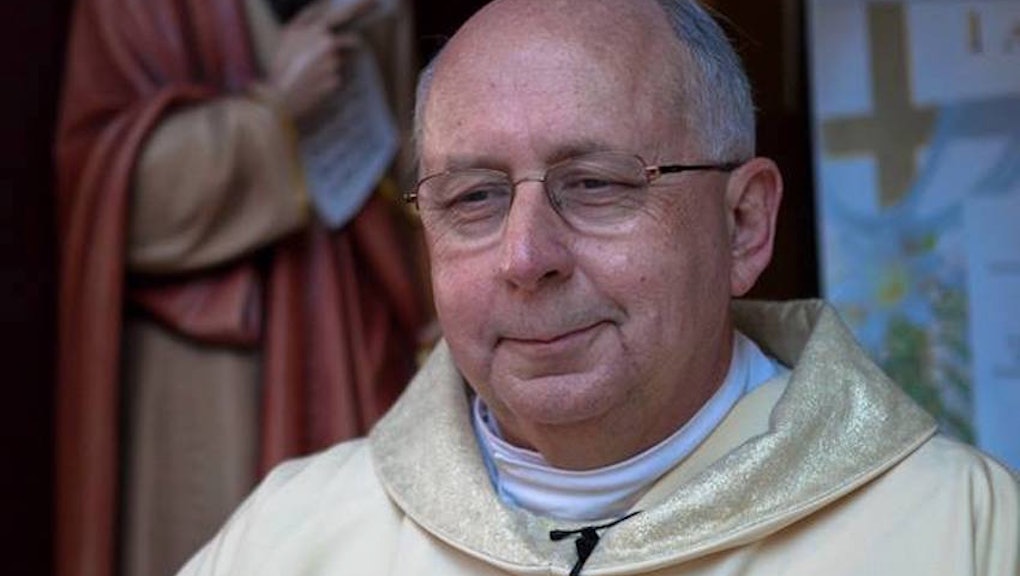 Following the recent tragic death of Leelah Alcorn — the transgender 17-year-old who committed suicide hours after posting a painful farewell message — and her mother's response, there's been increased attention within the religious community on LGBT issues.

Many might assume that the Church would view LGBT people negatively. But one Catholic deacon had smart words on how to treat transgender people and children: Love them.

Deacon Ray Dever of St. Paul Catholic Church in Tampa, Florida, wrote a personal essay on the topic and discussed his family's experience with having a transgender child. The essay was posted Dec. 28 to coincide with the celebration of the Holy Family — made up of Jesus, Mary and Joseph — but also to address comments like those in Alcorn's letter saying that her parents' devout religious beliefs meant they would not support their transgender child.

The essay was posted on the New Ways Ministry blog and is worth a read in its entirety, but some key passages stood out. Dever talks about having his son come out as transgender while studying as a sophomore at Georgetown University just a few weeks after Pope Francis famously said on the topic of gay people, "Who am I to judge?"

Dever then shared parts of his journey, writing:

"When our daughter came out, my wife and I experienced the full range of thoughts and emotions that any parents do in that situation – shock at the news, a lack of understanding of gender issues, conflict with what the Church teaches about human sexuality, confusion and guilt about what we should do as parents, profound sadness at what felt like the loss of our son, fear and worry for what the future would hold for her. There were arguments, sleepless nights and prayers – lots of prayers."

But unlike some parents who unfortunately feel like a child coming out as transgender somehow means they've lost that family member, Dever wrote that embracing his child's decision and life was the only and best thing he and his wife could really do.

We slowly came to the realization that we hadn't lost the person who had been our son. In fact, in many respects we got our child back, as she embraced her gender identity and emerged from the depths of depression. All the creativity, humor, empathy and intelligence that make her an exceptional person are still there and are shining through stronger than ever. And I'd like to think that the acceptance of her immediate and extended Catholic family have played some part in that positive transformation.

Unfortunately, not all parents are as welcoming to this kind of news as Dever, which he realizes and is now working to address.

However, family support for LGBTQ children is obviously not the rule, and is often problematic for Catholic families in particular, given the mixed and often confusing messages they hear from the Church regarding LGBTQ issues. A few months ago I had the privilege of visiting with the LGBTQ Resource Center and the Catholic chaplain's office at Georgetown. While I was surprised and gratified by the warm welcome that I received as an interested, supportive parent of an LGBTQ student, I was saddened to hear that I was the exception and that there were far too many stories of families rejecting their LGBTQ children and of causing tremendous pain and family divisions.

But for Dever, as a devout deacon and member of the Catholic church, it was clear that this was the only option.

And if one thing is crystal clear in the public ministry and teachings of our Lord, it is that everyone is included in His love and mercy and forgiveness, and that we are all called to do the same. For those Catholic families with LGBTQ children that are struggling with what they should do, I would suggest that they look to the Holy Family. Look to the love embodied in the Incarnation, a love like no other, and embrace your children. As the Church calls us to do first and foremost, follow your conscience, love own another, and especially love your children.

It's unfortunate that we even need to have these kinds of conversations and write these kinds of essays. However, while many people try to cloak their hate in unfounded and generally misinterpreted religious doctrines and arcane scriptures, it's refreshing to know that some Catholic clergy remember the real messages of the Bible, as Dever writes: "As the Church calls us to do first and foremost, follow your conscience, love own [sic] another, and especially love your children."