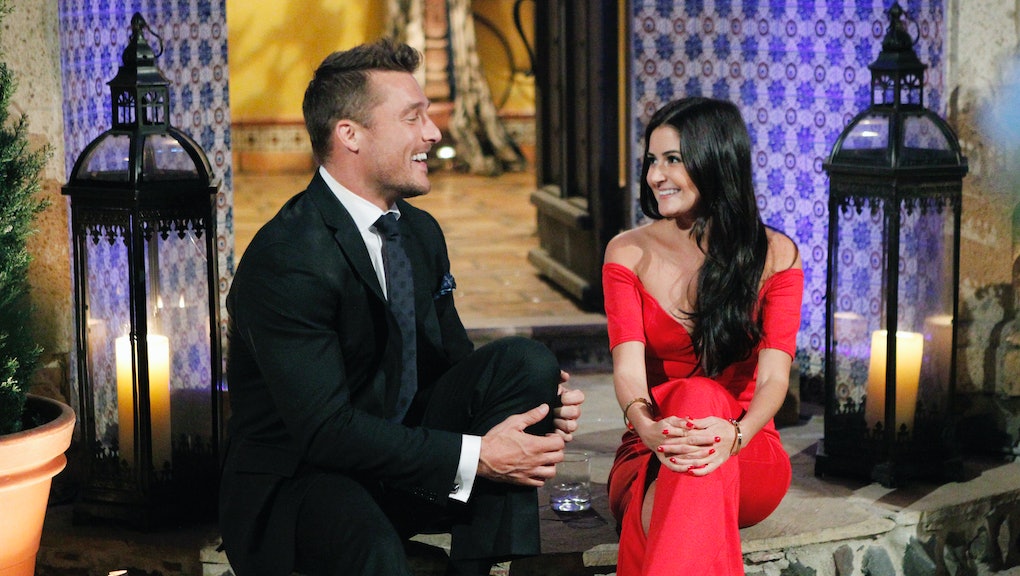 7 Relationship Myths You'd Believe If You Only Watched 'The Bachelor'

Everything's coming up roses, if your love life mirrors The Bachelor.

The 19th season of The Bachelor kicks off on ABC tonight, meaning we're about to take our national semi-annual vacation to a fantasyland in which all dates end with roses, all breakups end with limo rides and eight-week relationships end with engagement rings.

In other words, it's a la-la-land where real rules do not apply.

Each year when The Bachelor (and its superior sister show, The Bachelorette) come around, we're lulled into an emotional stupor by the flickering of a thousand candles reflecting off sequin dresses and the smooth assurances of host Chris Harrison — only to have the truth come crashing down the minute the show ends. We know relationships aren't like this. We know we're smarter than this. And yet...

Here are seven relationship lies the show would have us believing every single season:

1. All you need to know before putting a ring on it is that they're "the One."

Being in love with someone and knowing they're the one you want to spend the rest of your life isn't actually what sets you up for a solid future. The key is knowing whether you're on the same page for when life's big obstacles come your way.

Mikki Meyer, a clinical fellow with the American Association for Marriage and Family Therapy, told Mic, "[Couples] need to explore key items and make sure they can be on the same page. What are their religious values? How do they handle money? What are they thinking about children? What about education? And what about work? Because if you don't look at those pieces, it can be a disaster. If you do look at them, you can negotiate." That's not exactly the fodder of Rose Ceremony chitchat.

2. Your relationship can overcome anything as long as you love each other.

Actually, love doesn't conquer all. Knowing how to tackle problems together does. "It's all about problem-solving," Meyer said. If you can't agree when it comes to decision-making, or communicate when there's a disagreement, love won't be much help. If 12 years of Bachelor and Bachelorette breakups aren't testament to that, we don't know what is.

3. You shouldn't give up until you find your soul mate.

We call shenanigans on "soul mates." Even Sean Lowe, the former Bachelor star, knows that the idea of a soul mate isn't only unrealistic, but it can also be unhealthy. "It sets everyone up for unrealistic expectations and emphasizes the romance over the hard work of building a relationship," Lowe blogged after Season 10 of The Bachelorette.

Lowe's point is underscored by a recent study, which found that couples who view themselves as soul mates actually fared worse than couples who saw themselves as partners on a journey together. If you think your relationship is destined to work, it's going to be tough to tackle the inevitable relationship problems. On the other hand, those problems are less likely to derail you if you go in realizing it's not going to be perfect.

4. You don't need to spend years with someone to know you're right for each other.

Actually, years might help — or at least more than eight weeks. Conventional wisdom suggests that, but so does science: A recent study of 3,000 married couples found that those who dated for at least three years before getting engaged were 39% less likely to get divorced than couples who dated less than a year.

Even Lowe admitted that having minimal time is challenging. In a blog post, the Bachelor alum wrote, "Nobody told Catherine and me that our toughest challenge would come after we rode those elephants off into the sunset. Falling in love while globetrotting the world was the easy part. Learning how to love someone you've spent a collective 20 hours with is the really hard part."

5. Attraction is a crucial piece of the relationship puzzle.

As a meat market of conventionally attractive 20- and 30-somethings, The Bachelor isn't necessarily stacking the pool in the man's favor. Sexual attraction is important, but plenty of experts and studies have shown that it's not the guarantee of happiness in the long run. "[There] is no reliable association between physical attractiveness and relationship satisfaction," according to Ty Tashiro, a professor at the Center for Addictions, Personality and Emotion Research at the University of Maryland.

Plus, what we're attracted to can change — so it's better not to pin all your hopes (or, er, your roses) on a moving target.

6. It doesn't matter what anyone else thinks about your relationship.

Actually, what everyone else thinks can make a big difference. Relationships thrive when they have external support, numerous studies have shown; knowing you've got a network of supportive people behind your relationship is crucial, as is feeling like your relationship is socially beneficial. "Strong family, where the families are supportive of the relationship, is really helpful," Meyer said.

In other words, picking the villain who no one liked is good TV, but it's a bad idea for your love life.

7. If the person is really "the One," it should last forever.

And there are more than a few Bachelor alumni to attest to that.