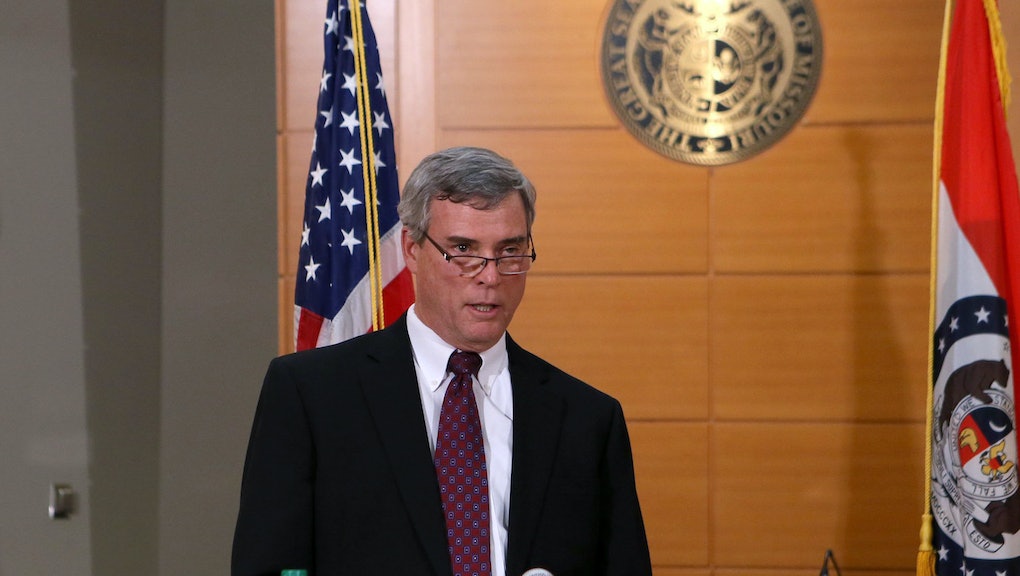 A member of the grand jury that oversaw the case against Darren Wilson is suing St. Louis County Prosecuting Attorney Robert McCulloch in an effort to speak out about the case, arguing that McCulloch mischaracterized both the proceedings and the grand jury's views.

St. Louis Public Radio's Chris McDaniel reports that the juror, identified only as "Grand Juror Doe" in court papers, filed the lawsuit in an effort to discuss what exactly happened during the Darren Wilson case. Grand jurors are normally barred by law from speaking about cases with which they were involved.

According to the lawsuit, McCulloch's characterization of the case wasn't wholly accurate; thus, the unnamed juror should be given the opportunity to offer an alternate version.

The laws keep the juror "from discussing truthful information about a matter of public significance," the lawsuit argues.

The American Civil Liberties Union of Missouri, which helped file the suit, argued that the Wilson case is unique, and therefore the typical restrictions on jurors discussing cases shouldn't apply. "Any interests furthered by maintaining grand jury secrecy are outweighed by the interests secured by the First Amendment," the lawsuit says.

Giving "Grand Juror Doe" the ability to speak about the case would only add to the ongoing conversation about race in the U.S., the organization says in the lawsuit.

"In [Doe]'s view, the current information available about the grand jurors' views is not entirely accurate — especially the implication that all grand jurors believed that there was no support for any charges," the lawsuit argues. "Moreover, the public characterization of the grand jurors' view of witnesses and evidence does not accord with [Doe]'s own."

Grand jurors face a misdemeanor conviction if they discuss cases, but McCulloch isn't restricted by any such laws. He has publicly spoken about the Wilson case multiple times, including one interview in which he admitted that he knew some witnesses were "clearly not telling the truth."

The Wilson case has been marred by controversy, even before the verdict came down. In the lead up to the decision, the case was plagued by a series of leaks that McCulloch deemed "exasperating." And as CNN reported in December, the case's witnesses themselves gave troubling accounts. One admitted to lying, and it was later revealed that another witness — who supported Wilson's testimony — posted an online comment on the day of Michael Brown's death that said, "They need to kill the f---ing n-----s. It is like an ape fest."

McCulloch's office has not yet responded to the lawsuit.