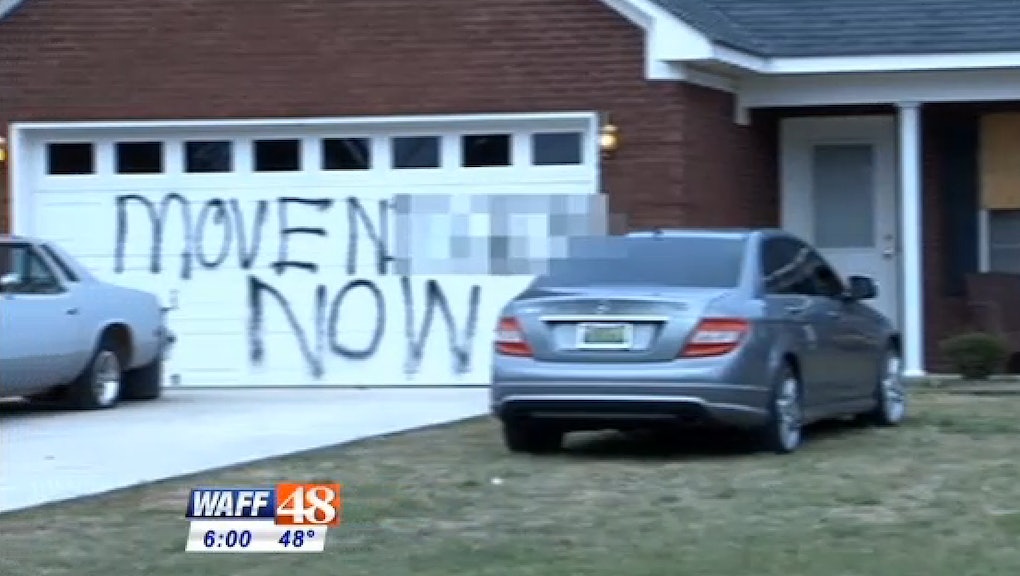 It may say 2015 on the calendar, but one neighborhood in Alabama seems stuck in 1965.

Limestone County resident Terry Turner was celebrating the new year with her granddaughter last week when she heard a violent crash in front of her home. She checked her front room, only to see three of her windows broken by rocks. When police arrived, Turner was horrified to see the windows weren't the only thing the vandals had targeted.

"I don't hate whoever did this," Turner told WHNT News. "I just don't understand it."

In huge block letters, the words "Move N**ger Now" were clearly visible on the garage door in her driveway, an especially painful act of property damage. Having lived in the home for eight years, Turner told reporters that she has experienced people yelling the slur at her from passing cars, but she never thought it would get this bad.

"For people to just be hated because of the color of their skin is unacceptable," she said. "This is my home. I'm free to live wherever I want to live."

Police are investigating the incident as criminal mischief and not as a hate crime. According to WAFF, this is because they don't yet know who the vandals are or their motivations. What is for sure is that Turner spent what should have been a relaxing holiday cleaning up damage and installing security cameras around her home.

Regardless of who the culprits are, this display of overt racism and intimidation is nothing new to the black community, which has long struggled simply to live in the neighborhoods of its choice. When not being threatened physically, minorities also fall victim to more insidious societal prejudice, including housing discrimination and segregation.

In the face of such ignorance, however, Turner is so far standing strong. Some of Turner's other neighbors have also stepped up in order to show the family that she is not alone. One good Samaritan dropped by with a $50 gift card to help with restoration efforts, according to the news station, and another family launched a GoFundMe page that has so far raised $1,000.

Ultimately, this Alabama grandmother has a message for the people who attacked her home: "I'm not going anywhere."

And she certainly shouldn't have to.