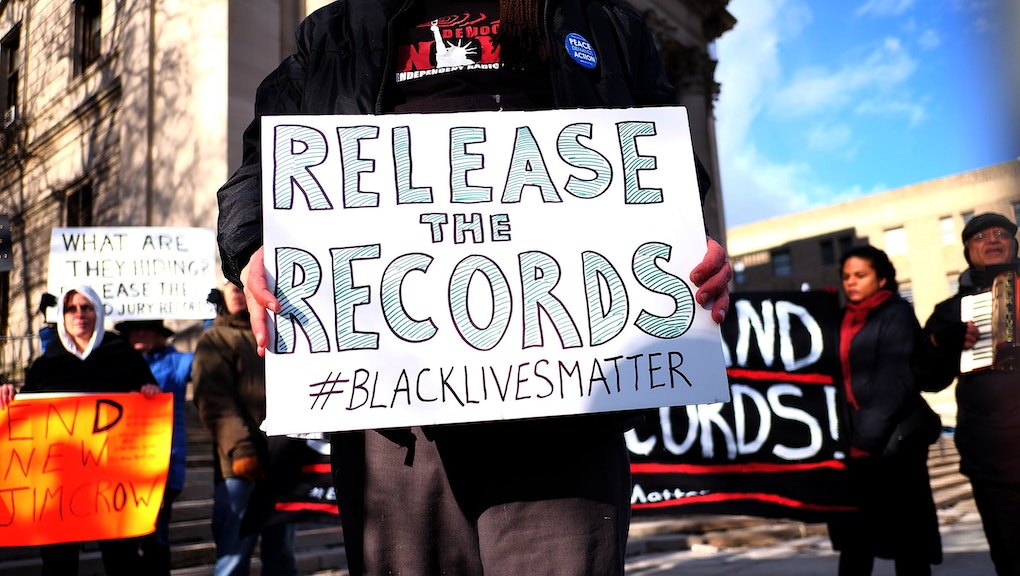 The news: The Eric Garner case has hit courts once again. On Monday, a New York judge will hear arguments on whether to make the grand jury hearing records public.

Grand jury proceedings, which are led by a prosecutor, are secret by law. The New York Civil Liberties Union, the city's public advocate, the Legal Aid Society and the New York Post have each filed petitions in State Supreme Court in Staten Island asking that an exception should be made in the Garner case, arguing that "it is important to show how the grand jury came to its conclusion, and possibly expose flaws in the secrecy-shrouded process."

The background: In December, a grand jury voted to not indict the police officer who placed unarmed black man Eric Garner in a chokehold while arresting him for selling cigarettes. A video of the incident in which Garner repeatedly cries "I can't breathe!" sparked outrage across the country. The grand jury decision — coming shortly after a similar ruling regarding Michael Brown's death in Ferguson, Missouri — fueled an already-inflamed controversy across the country about unnecessary and discriminatory police force against minorities.

The secrecy of grand jury investigations has received significant criticism in the aftermath of the Ferguson and Staten Island decisions. Some information has already been leaked about the Garner grand jury, and shortly after the ruling a New York City judge released "limited details," including that four videos were shown and 50 witnesses were heard.

Organizations and others requesting an exception argue that Americans deserve to get a glimpse of the inner workings of the Garner grand jury and, moreover, the grand jury system in general, which has come under the scrutiny of legal analysts in the aftermath of the Brown and Garner cases.

Why it matters:  Among other conversations over race relations and criminal justice that have emerged, the Brown and Garner cases also revealed a fatal flaw in grand juries: They may be structurally incapable of holding police officers accountable due to prosecutors' outsized influence over how jurors end up viewing the case. Prosecutors select witnesses and decide the order they appear, and there is no chance for cross-examination.

If the judge makes the hearing records available, the American public can examine and evaluate the evidence, testimony and questioning that were kept from their view and led to the oft-questioned consensus of the Garner grand jury.

Moreover, the release of the grand jury records could be a step toward restoring the public's dismal confidence in the criminal justice system. The grand jury secrecy has further eroded that trust, and as Elizabeth Holtzman and Barbara Jones so aptly pointed out in a letter to the editor in the New York Times, "without that confidence — and the cooperation with law enforcement that is its natural consequence — fighting crime becomes that much harder."

While grand jury systems are steeped in the tradition of secrecy, at this point, secrets seem to be doing more harm than good. Hopefully the judge keeps that in mind.