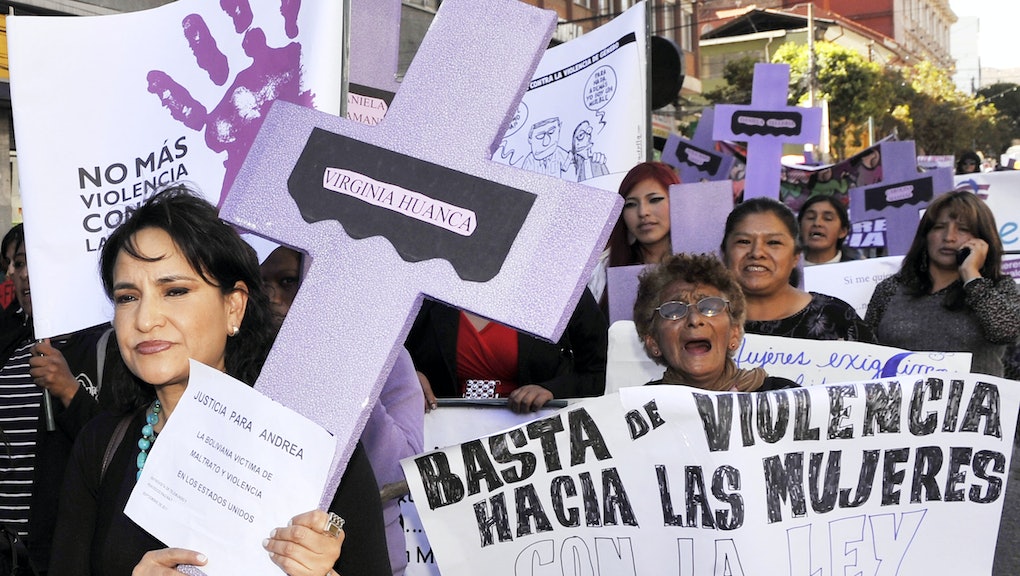 6 Women Are Massacred Every Day in Mexico — So Why Does Nobody Seem to Care?

Violence against women is a pandemic known as "feminicidio," or femicide, in Mexico. Women are increasingly bearing the brunt of rampant corruption, fueled by the power of drug cartels. A recent statistic by the National Citizen Femicide Observatory reveals that six women are killed every day in Mexico.

The response from the world, however, has been bizarrely muted. In September, the gruesome murder of 43 student protesters gained national attention when, upon the direction of local politicians, they were rounded up by police and handed over to a drug gang to kill and then burn. Yet the systematic killing of women barely gets reported, let alone investigated. As noted by Al Jazeera, only 24% of the roughly 4,000 femicides reported in 2012 and 2013 were investigated. Of those, only 1.6% ended in sentencing.

It's no wonder Mexico is consistently rated as one of the worst countries in the world for women. "The violence affects men and women, but often women disproportionately," explains Minky Worden, director of global initiatives at Human Rights Watch, who connects the violence against women to Mexico's "culture of male chauvinism." "Mexico is a place where law enforcement remains a challenge, and the government has an obligation to protect women, but often fails in that obligation, as it does to protect men."

Globally, 1 in 3 women has experienced either physical or sexual violence from their partner, reports the World Health Organization. And 7% of women will experience sexual assault by a non-partner at some point in their lives.

In Mexico, this rate is almost double that rate. According to Ana Güezmes, a representative of United Nations Women, who spoke with Al Jazeera, nearly 63% of Mexican women have experienced sexual or physical violence by men; between a third and a half have been at the hands of men they have known.

Femicides are driven by misogyny. The manner in which women have been murdered intimates the level of hatred against women that motivated the attacks. Their bodies were not just sexually ravaged, but their female parts dismembered, detached and mutilated. "Hate is what marks these crimes," Maria de la Luz Estrada, head of the National Citizen Femicide Observatory told Al Jazeera. "The bodies show 20 or 30 blows. They slice off breasts and faces and throw the fragments in the garbage. In a macho society like Mexico, authorities are always questioning what the women did. What was she wearing? Was she sexually active? This helps the impunity and lack of action."

Unfortunately, if 2015 is anything like the year prior, women in Mexico are unlikely to see much justice. The special prosecutor for violent crimes against women, Nelly Montealegre Diaz, told Al Jazeera that "no femicides were prosecuted in 2014," citing "impunity and corruption" for the lack of legal action. Members of the Observatory pamphlet and flyer their communities to raise awareness, and their allies have taken to social media to spread the word globally. But they do so at their own risk. Activist Lilia Alejandra García Andrade, for example, "was brutally raped, tortured and murdered for her efforts. Her body was found on Valentine's Day in 2001 in Ciudad Juárez, Mexico."

Now is the time to raise awareness. With a series of meetings between Mexico's President Peña Nieto and President Obama beginning today, the Human Rights Watch is pressing for action to address Mexico's "worst human rights crisis in years." A protest has been scheduled for Tuesday morning in Washington, D.C., against Nieto's visit. It is indeed the perfect time to force Nieto to promise substantive action to protect women and bring justice to those who lost their lives simply because of their gender. But will the world listen?