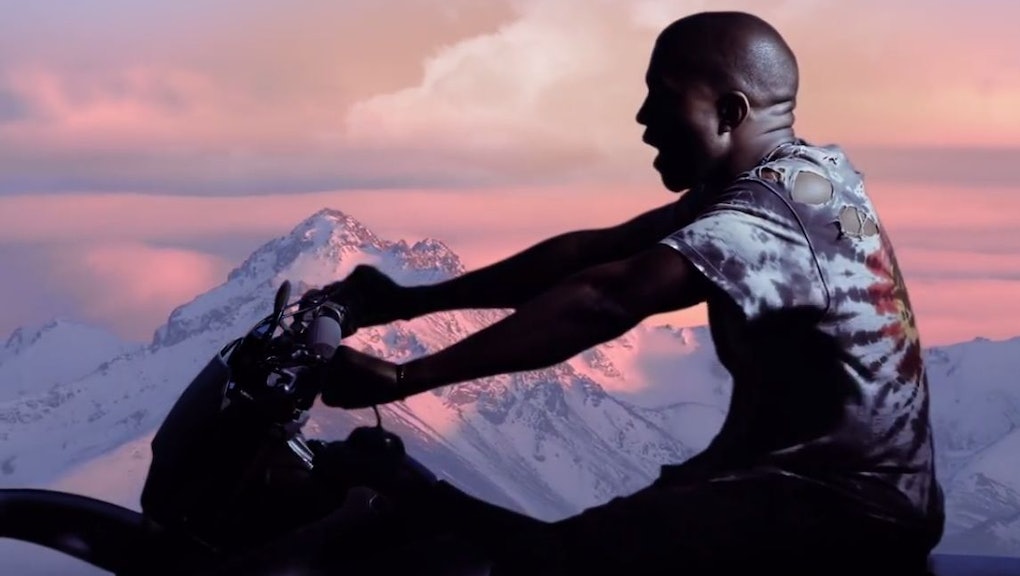 Here's Absolutely Everything We Know About Kanye West's New Album

At midnight on New Year's Eve, Kanye West blessed us with "Only One," the Paul McCartney-assisted soulful first track off West's upcoming, untitled album. Depending on your vantage, it was either the last song released in 2014 or the first song of 2015. But either way it's gone on to become the first big music story of 2015.

The track's release reignited rumors about a new album, an event that has been speculated about intensely since Yeezy released Yeezus in summer 2013. The speculation is far ranging and has taken place over longer than a year, so we've compiled it — rumors and all — in one handy place for reference as "Yeezy season" approaches once again.

1. He collaborated with everyone imaginable.

The list of rumored collaborators on the upcoming album is pretty long.

2. It was written and recorded on two continents.

Multiple reports have cited that the album was written and recorded in Los Angeles, Mexico and Florence, Italy. Yeezy's time in Los Angeles was rumored to be at Shangri-La Studios, home base of famed producer and likely collaborator Rick Rubin, who was behind some of Yeezus' strangeness.

Ty Dolla $ign reported his experience recording recently with West and McCartney, saying they were "in Mexico, at this big house. The back of the house had no walls and no doors; it was just open [and facing] the ocean. You would think he would want the mic enclosed and all that but we just had the doors open, and it came out perfect."

"Bruce Springsteen dropped this album called Nebraska and right after that he did Born In the U.S.A.," he said. "This next one, I have a feeling, because of what we did right now, has to be Born In the U.S.A."

What that means has yet to be determined. Though West is no stranger to hyperbole, his comparison makes sense: After a dark, stripped down and angry effort (Nebraska or Yeezus) comes a lusher, still-political blockbuster.

4. The album will have between eight and 12 tracks.

Some reports cite the album has eight tracks, while others clock it in at 12. This track list has been making the rounds, with one Redditor, who claims to be the son of a Def Jam janitor asserting the document is real, while skeptical onlookers compare the claim to Pokemon folklore.

Despite the rumors, no official track list has been released at this time. And despite the Def Jam janitor's son's claim, this one looks pretty fake — "Only One" isn't on there, and it's a little hard to believe that James Blake and Bon Iver collaborated with West on a song called "Croissant." But stranger things have happened.

5. The sound is a cross between 'Yeezus' and West's classic soul sound.

Way back when West planned to release this album in 2014, he was said to have written a collection of songs that bridged the gap between his soul-sampling "Gold Digger" days and the dark, twisted sound of most recent Yeezus. This is big news. Though West is most famous for pioneering that sound, he claimed after Yeezus that he was leaving it behind.

Although the information came from an unnamed source, the first single "Only One" seems to suggest there is some creedence to the claim.

West told GQ in a July 2014 article that he'd already written one version of the album but ended up scrapping it because he wanted to make something less "beautiful." So what we'll end up hearing when the album releases is at least a second draft, if not third or fourth, of what West intended as a follow-up to 2013's Yeezus.

7. Seth Rogen has heard the album. And seen its first live performance.

If you've written one of the most hotly anticipated, high-profile hip-hop albums of the last few years, it makes sense that you would play it for the guy from Knocked Up, right?

According to actor and "Bound 2" appreciator Rogen, West rapped the entire album for him in a van in New York City. If North Korea doesn't take out Rogen first, maybe he can give us some clues as to what to expect from the new songs.

8. There was an unexpected listening party in Paris.

Although Rogen got the ultimate experience with his private listening party, a handful of lucky people got the next best thing at a West-hosted listening party in Paris in September. Possible collaborator Theophilus London posted this photo from the event, stating that West played the album in its entirety three times.

This only confirmed Aziz Ansari's report that Kanye West loves listening to his own music.

9. The next single will feature Rihanna, McCartney and Ty Dolla $ign.

In a recent interview with Billboard, Ty Dolla $ign gave the inside scoop on the tracks he wrote and recorded with West for the album. He revealed that the next track we'd hear would be another McCartney collaboration, this time including himself and Rihanna.

Ty Dolla $ign is noted for his excellent background vocals on "Only One" and this trippy video, where his head is a balloon.

Rumors swirled over the summer that West was planning to release his album as a surprise, similar to what Beyoncé did in December 2013 with her most recent album, BEYONCE. With one single out by surprise and still no release date available, this theory still holds water.

Though "Only One" is the first official song off the album, "All Day" was long rumored to be the lead single. The song leaked in lo-fi form in August. In November, when Kim Kardashian "broke the Internet" with the Paper magazine cover, West simply tweeted "#ALLDAY." So it seems like an upbeat song at least.

The song is also rumored by Stereogum to feature Bon Iver backing vocals.

We're still testing this one out at Mic, but we have faith that the Macca-assisted, vocoder heavy ditty might just be the secret to achieving nirvana. We'll keep you posted.