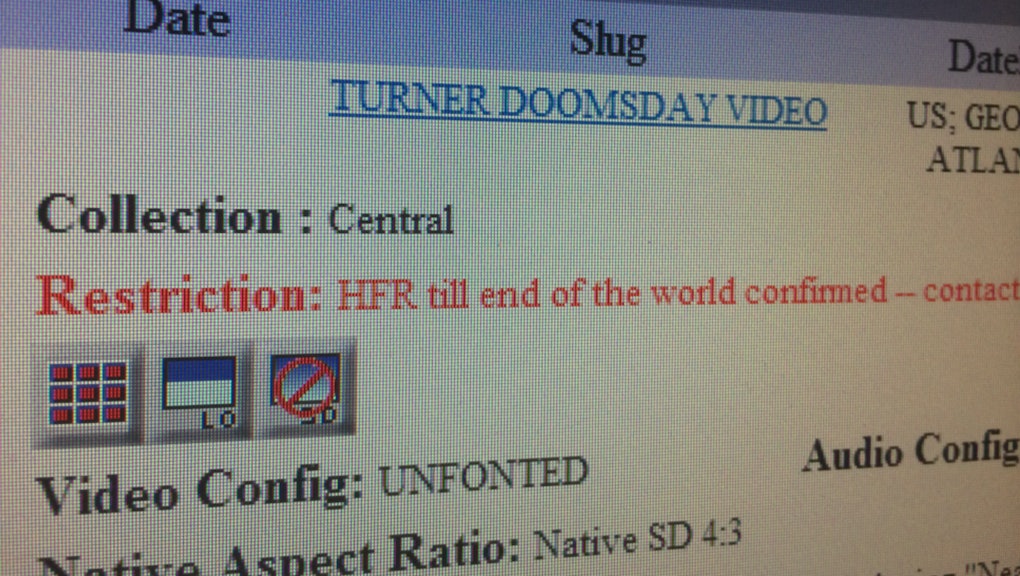 This Is the Video CNN Will Play During the Apocalypse

Whether it's a plague, alien enslavement, planet-killing asteroids or the sun finally saying screw it and exploding, CNN has long made clear their intention to broadcast through the apocalypse.

For years, there have been rumors of an alleged tape the network would play during the end of days, but now Jalopnik's Michael Ballaban has turned up proof of CNN's plan to be the last news network standing. Labeled "TURNER DOOMSDAY VIDEO," it has a blunt description reading "HFR [hold for release] till end of the world confirmed":

Nestled deep in CNN's archive, a low-resolution video of a military band playing "Nearer, My God, to Thee" remains ready for broadcast. That's the same song the doomed Titanic orchestra allegedly played as the ship sank into the Atlantic Ocean, suggesting that network founder Ted Turner, too, wanted CNN to go down with the ship.

The existence of the doomsday footage mirrors a statement Turner made at the network's inception 34 years ago:

"We'll be on, and we will cover the end of the world, live, and that will be our last event. We'll play the National Anthem only one time, on the first of June [the day CNN launched], and when the end of the world comes, we'll play 'Nearer, My God, to Thee' before we sign off."

The video was commissioned during the Cold War, when the imminent end of all human existence at the hands of trigger-happy nuclear madmen might have seemed more plausible. Barring the knowledge that nukes would hit the continental U.S. within the next several minutes, just how CNN would determine the exact moment humanity becomes utterly doomed isn't really clear.

With the task of broadcasting the fateful video apparently left to the last living staffer possessing the technical capacity to do so, when to play the last sad song of all time is probably going to be a judgment call.

Ballaban, a former CNN intern, describes the video as a relic of a more noble time when the network's commitment to reliable, credible reporting was less in question.

And on that note, one thing's clear: When the world's falling apart and CNN staffers are literally melting, ascending to heaven or turning into ravenous zombies right there in the studio, the last thing I do before humanity shuffles off this mortal coil is probably not going to be flipping the channel to Wolf Blitzer. If we're screwed anyhow, Fox News' send-off will probably be way more interesting. It'll probably be Obama's fault.