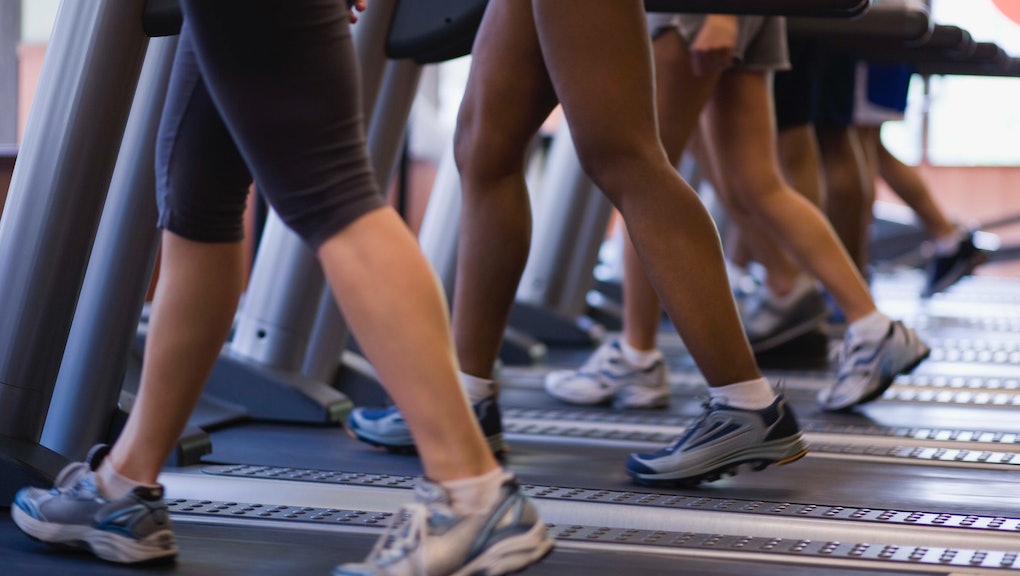 It is officially the busiest time of year in gyms across the country. In the second week of January, droves of gym-goers with New Year's resolutions are forking over initiation fees, lacing up sneakers and climbing on ellipticals. If history is any indication, they'll ditch their newfound fitness regimen by mid-February. And that's exactly what gyms want them to do.

People looking to firm up or slim down should, by all means, embrace physical fitness in the new year, but they shouldn't sign a gym contract. Psychologically, the January gym rush is a recipe for fitness failure, but there are ways to beat the odds, if you know what you're up against.

Mind games: There's nothing wrong with vowing to get in shape after the ball drops. New research from the Wharton School, published in the journal Management Science, suggests that temporal landmarks, like a new year, new semester or birthday, correspond with bursts of motivation, called the "fresh start effect." Psychologically, these temporal landmarks may let people distinguish between their present and past selves. Basically, by associating former bad habits with an older version of themselves, they can move forward with a fresh slate. Sustaining that motivation is another story. The gym-going drive sparked by temporal landmarks fades quickly.

The sunk-cost fallacy compounds waning motivation. When we invest money in something, or put time and effort into achieving a goal, we feel obligated to use the object or see the goal through — at least initially, according to the sunk-cost fallacy. But once the cost fades into hindsight, so does the guilt about not getting your money's worth.

Let's say you join a gym in January to get a limited-time-only slashed initiation fee. The flash-deal comes with a heavy up-front cost but over the course of a year, it amounts to lower monthly payments. Coughing up more at the outset, you reason, is both a smart long-term financial decision and built-in motivation to schlep to the gym, if for no other reason than to justify the expense. Plus, for a cancellation fee of $150, you can quit any time you want.

Initially, the strategy works. You're full of motivation and have just paid a lot of money for treadmill access. But, once your credit card cycle ends and you're no longer staring the sunk cost in the face, your sense of obligation disappears and so does your gym habit. You consider quitting the gym, but cancellation costs more than monthly membership, and you already paid the initiation fee. So, you don't do anything.

In the eyes of the fitness industry, giving up makes someone a great gym member — that is, a member who rarely works out.

Dropping like flies by February: Most gyms, from no-frills muscle factories to chichi wellness spas, hawk as many contracts as possible during the holiday season because they lose about half their members each year, NPR reports. Plus, they know that the crowds in January will turn off new members. Gym volume surges by 30% to 50% in January, before plummeting in February, when 80% of new members clear out, by some estimates. That means serious profits.

It's not exactly a secret that gyms use a manipulative business model. In 2011, a U.K. high court ruling deemed long fitness contracts unfair. One gym's business model, according to the ruling, was "designed and calculated to take advantage of the naivety and inexperience of the average consumer using gym clubs at the lower end of the market."

The U.S. hasn't gotten there yet, even though gym-goers' habits have been the same for a while. Back in 2003, Stanford Business School economists published their three-year analysis of 8,000 gym members in Boston. On average, people made it to the gym once a week, and many stopped going altogether but retained membership out of guilt. About 80% of the members could have saved money paying a $10 door fee option. Some gyms in the study offered a more cost-effective pay-as-you-go package, but neglected to advertise it.

An alternative option: To develop long-lasting exercise habits, consider not planning ahead. Take exercise a week, or even a day, at a time. Go to Soul Cycle on a whim. Pay the guest fee at your friend's gym. Get a trial membership at a luxe fitness club. Reserve court time. If you set lower expectations, you're more likely to exceed them. Short-term splurges may seem irresponsible, but they probably won't nearly approach the cost of an idle gym membership.

Once you're in good enough shape to enjoy, rather than dread, exercising, revisit the idea of a longer-term contract. When it comes to gym relationships, there's nothing wrong with commitment-phobia.