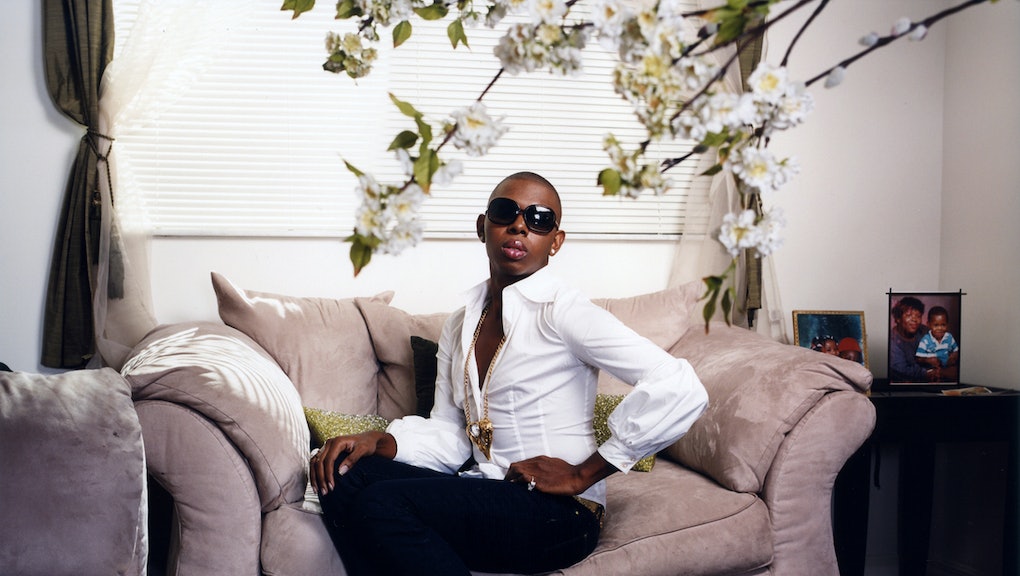 "One of the most powerful aspects of 'the closet,'" photographer M. Sharkey told Mic, "is that once you are out, no force on Earth or in heaven can make you go back in."

Sharkey knows this feeling well. As a gay teen in suburban Colorado in the 1980s, he was partially out, especially because he didn't want to hide his love for his first boyfriend at the age of 15. There was no gay community, there were no "gay hangouts or social clubs." "Being openly gay was not possible without intense reaction and potentially severe repercussions," he said. "I had to be extremely careful about who I told. I wasn't in the closet, but I was still not completely open."

However, witnessing the sea change in public opinion toward the LGBT community since the '80s, Sharkey knew he needed to do something. Grabbing his camera, Sharkey set out to document how "this major cultural shift" was reflected in youth. In the spring of 2006, this desire was central to the creation of the project "Queer Kids," which includes photographs of children and adolescents throughout the U.S. and Europe.

It's inspiring: Today's queer youth embody positivism and confidence unseen in previous generations. His photos of youth from around the world reflect this fact, as well as society's growing acceptance of the LGBT community. "Teenagers feel passionately about everything, but this new freedom is especially powerful," the photographer noted.

It's extraordinary: "Whatever else the photographs may be," Starkey explained, "they are first and foremost a document of an extraordinary moment in history." Even within the LGBT community, there has been significant shift in how kids relate to their own gender and sexual identity. Sharkey observed this change over the nine-year duration of his project. Specifically, he noted the way that youth have come to feel more wary about labels as mainstream society assimilated aspects of gay culture. "In the beginning, I think that they were excited to embrace certain labels," he said. "Labels can be liberating; they can be clarifying and they can be empowering in their transgression. But they can also be stifling and they are quite often too narrow."

"I think the kids today are much more likely to embrace an identity that is more nebulous and fluid," he added, which is why he chose "queer" for the title. It's "not necessarily vague, but not confining either."

The project's global nature also led to some interesting cross-cultural contrasts, especially relating to gender and sexuality. "The young people I encounter[ed] in Europe seem less likely to adopt 'queer' as a label," he noted. "They also seem to be a bit less demonstrative in their expression and personal style. Many European nations are years ahead of the U.S. on various social issues, but there is something very interesting and exciting about the way Americans express themselves, especially young Americans."

Sharkey allowed his subjects to select a location of their choice for the photo session in order to add "the character and intimacy of the portrait while also providing some context." The settings magnify the subjects' own queer existence. They also bring the kids to life and portray what it's like to live as queer life in different places in the world in 2015.

Gender expression is the queerest of them all: Over the years, Sharkey became increasingly interested in how kids negotiated and played with their gender expression. "It's a force of great pleasure for many people to be able to express themselves in a very masculine or very feminine way," he said in an interview with New York Magazine. "We really enjoy it, we find great pleasure in it, and a lot of our sexual attraction comes from strong expressions of gender."

In his interviews with a number of his subjects, many of them spoke to the feeling that gender was a more ambiguous ground. For example, Jonathan, pictured above, said, "I have trouble at times with the gender aspect of my life just because I view it as something very fluid and something easy to manipulate."

He also did a series of portraits of Mars (pictured below), a trans youth he met in 2012, who was still in the process of transitioning. Sharkey was so impressed by Mars' presence that he photographed and interviewed him a second time, in 2014. In his artist's statement, Sharkey wrote about witnessing Mars' transformation over two years: "[Mars] is still the same remarkable presence in front of the camera only now in a more fully realized form. Before, where there was the fascinating combination of confidence, vulnerability and mystery he has now added a new kind of strength and self-possession. For a photographer such as myself, this kind of extraordinary subject is what I live for. And to have the opportunity to continue to photograph Mars is a true privilege."

These "Queer Kids" possess a sophisticated understanding of their own identity. And those labels exist for their pleasure — not their entrapment. Ultimately, it's this enlightened sensibility that Sharkey has so powerfully captured in his bold project.