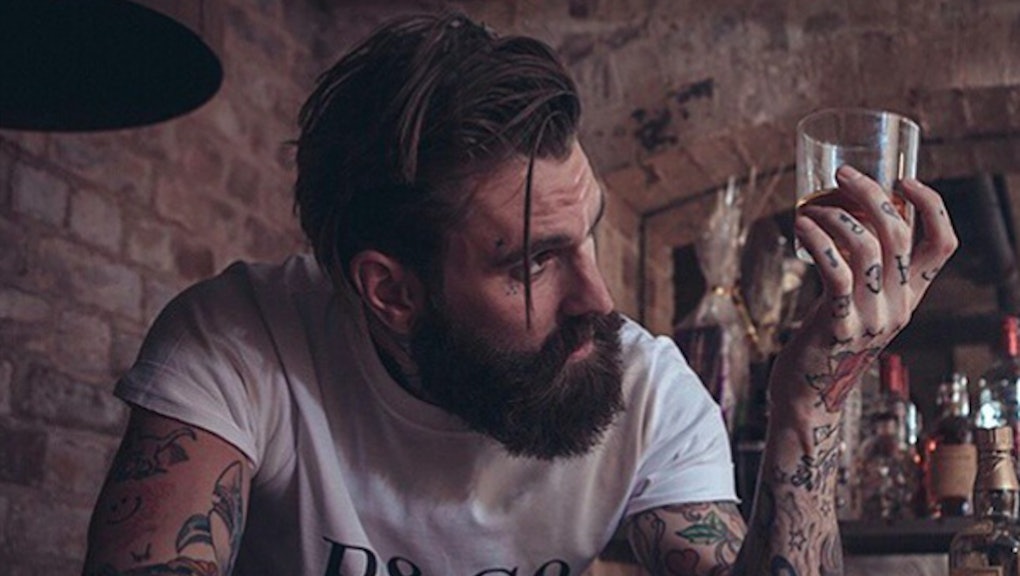 What the "Lumbersexual" Trend Really Says About Men in Society Today

Officially coined only a few months ago by blogs like Gear Junkie, America's latest incarnation of masculinity, the lumbersexual, is fundamentally a bearded hipster with a penchant for plaid, tattoos and cold brew — both coffee and beer. Quickly sensationalized by countless media sites, from Gawker and BuzzFeed to Cosmo and Time, the lumbersexual actually says a lot about the state of masculinity in the 21st century.

In fact, one might just wonder if this new cultural identity signifies a crisis in masculinity. This emergent male archetype, with its echoes of a rugged albeit bygone era, parodies aspects of heterosexual masculinity in extreme and even ridiculous ways, suggesting that the most celebrated manly characteristics are struggling to find a place in the 21st century.

A parody of masculinity, or the real thing? Up until now, the LGBT community and people interested in gender theory discussed the "performance" of gender, or how we deliberately appropriate cultural cues of gender, from hairstyle to clothing, to portray a desired gender type. The lumbersexual, however, represents something of a turning point. Now even straight men are thinking critically and openly about how their masculinity is constructed.

This has led to some fascinating observations.

Gay appropriation: One is that heterosexual men have gone out of their way to appropriate gay cultural signifiers of masculinity, as Tim Teeman asserts in his Daily Beast piece, "How [the] Straight World Stole 'Gay.'" "The lumbersexual is just straight culture's latest belated attempt to theatricalize masculinity, decades after gays got there first," Teeman writes. Mark Simpson, in a piece published today at Out, goes so far as to imply that, with the increased popularity of all things gay, straight men "crave gay adulation." Mimicry is, as the adage goes, the sincerest form of flattery. This might also explain the moniker. Otherwise a combination of lumberjack and hipster, "lumbster," seems like it would have been a more fitting term.

Searching for meaning: Willa Brown's captivating essay at the Atlantic contends that the lumbersexual, with its origins in the "romantic" and "authentic" American folk hero Paul Bunyan, does indeed indicate that masculinity is in crisis in the U.S. With money tight and gender parity increasing in the home, "the 'traditional' role of the man as the primary provider is now firmly out of reach for most Americans," Brown writes. "[That] is why it seems particularly apt that (mostly) white, young, urban, middle-class men have once again picked up a symbol invented in the early 20th century by men very much like themselves, a symbol that has long been gathering dust."

Of course, lumbersexual is not the first male archetype to appropriate aspects of gay culture. Remember the metrosexual fad popularized in the U.S. in the early 2000s? Something else is at work that makes this latest trend stand out.

And that thing is technology.

In a digital age, it has become harder and harder to prove one's strength, virility and survival skills. Some men seem to have turned to outright misogyny, harassing women online. Others go to war by operating drones or woo women in online dating sites, like Lumbermatch — yes, a dating website for lumbersexuals and people who like them.

Technology proves the extent to which gender is performed by everyone — just look at how we construct ourselves online, in our Facebook and video game avatars. But it has also rendered moot common behaviors of masculinity. Perhaps this is why straight men have gone to such exaggerated lengths to adopt, as Brown observes, such "authentic" and traditional signs of masculinity. Because "real men" can grow "real beards."

From the embodiment of faux environmentalism to the meticulous stylization of one's beard with oils and brushes, this male archetype is not different from other male identities in its emphasis on a specific performance of masculinity. But unlike other trends, the lumbersexual is perhaps the first archetype created in response to technology's affect on gender.

Whether men like or not, the digital era is here to stay — meaning the crisis of masculinity exemplified by the lumbersexual is also unlikely to go away anytime soon.