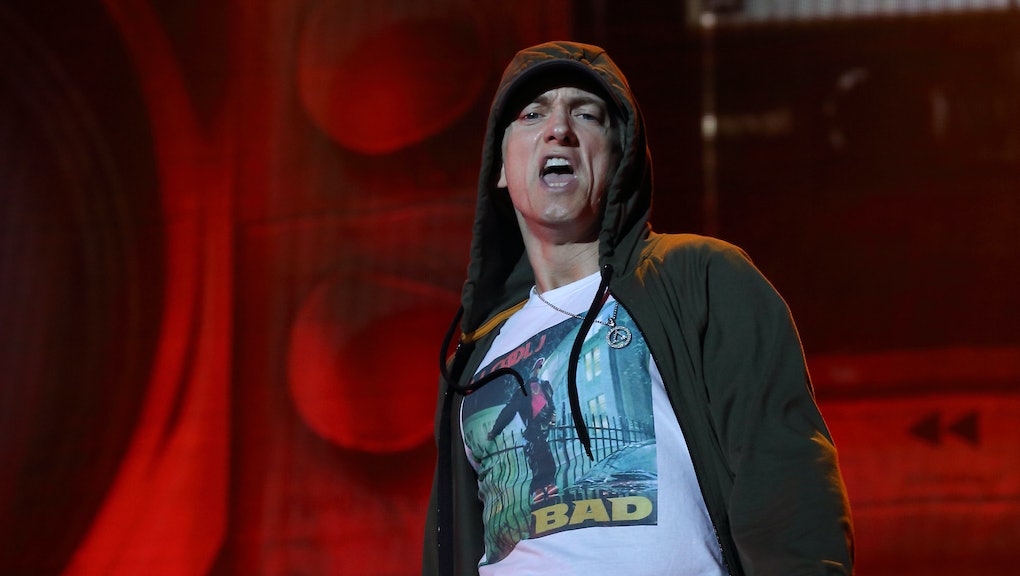 A Rapper Is Suing Eminem for Stealing His Music

Despite being more than a year old, Eminem's "Rap God" simply cannot steer clear of controversy.

Way back in 2013, the song drew intense controversy for being violently and despicably homophobic. Most critics pointed to a long string of gay insults all ending with "-looking boy." And nearly a year later, those exact same lines are sparking controversy, but for an entirely different reason: Rapper Raymond Jones — from one-hit wonders Hotstylz — is suing Eminem and his record label for $8 million for stealing those lines from his 2008 song "Lookin' Ass."

TMZ arranged the two snippets in question in back to back so one can hear whether the charges are legitimate.

The claims have been around for a little while. "He took so much of the record. That just don't sit right with us," Jones claimed in interview with XXL back in November 2014. "He could have reached out to us directly. He could have found a way to reach out to us through some kind of channel." Back then, the group was likely only looking for a bit of press for a diss track they wrote about the incident called "Rap Fraud." But now the group is turning up the heat and heading to court for the damages.

Their case is looking pretty thin. Eminem's "Rap God" does change its beat during that section, signaling a definite nod to "Lookin' Ass." But none of the words are similar, save the rhyme on "-looking boy." Hotstylz only includes one homophobic reference in their track, while Eminem crams three into that 20-second section. His controversy, as always, is part of what makes him original.

In that light, it's surprising that Hotstylz would want to claim that whole section as their own, judging by the huge cultural backlash against the lyrics. Eminem tried to defend his use of the words "gay" and "faggot" in "Rap God" as being stand-ins for general insults. "[W]hen I came up battle-rappin' or whatever, I never really equated those words [with homosexuality]," he told Rolling Stone. "It was more like calling someone a bitch or a punk or asshole."

But no matter how the lyrics were intended, they still do damage.

"Granted, [Eminem's verses are] not directed toward the gay community, but subconsciously it is," said openly gay hip-hop singer Solomon in response to "Rap God." "He's using the word 'faggot' to degrade another man. As if the worst thing a man can be is gay. What type of message does that embed into the minds of young kids, both gay and straight?"

Piggy-backing off Eminem's toxic legacy of homophobia and misogyny might not be Hotstylz's best move if they're trying to re-enter our present musical culture. Eminem's homophobia and misogyny — which he advanced last year by rapping about raping Iggy Azalea and punching Lana Del Ray in the face — are not the shining examples of lyricism we need more of in today's culture. That $8 million that Hotstylz stands to earn if courts decide that Eminem truly lifted that homophobic section straight from "Lookin' Ass" is dirty money.