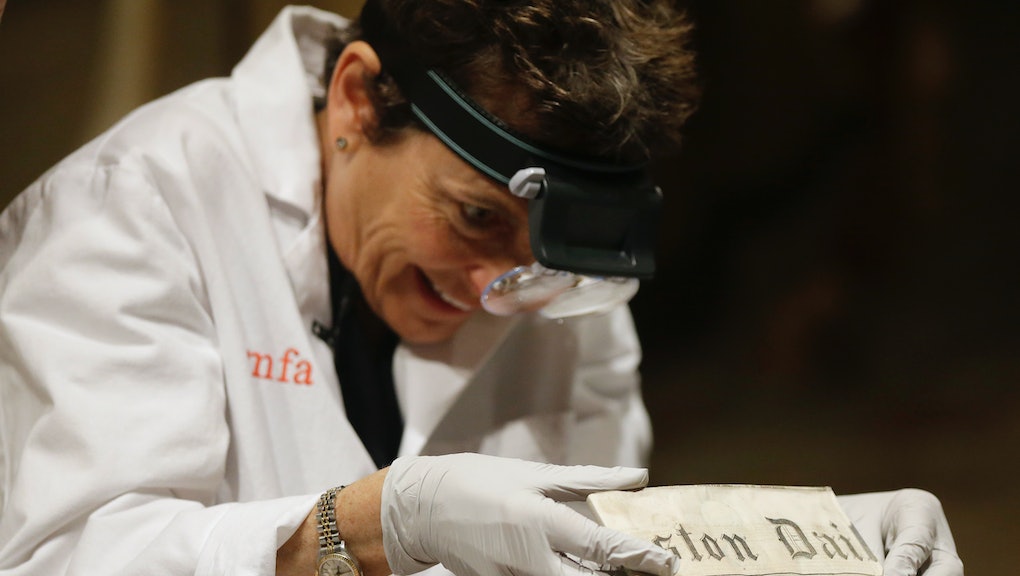 USA Today reports that the box, which was originally embedded in a cornerstone in 1795, had not been opened since it was removed from the wall during emergency repairs in 1855 after a water leak. Museum staff worked for nearly four hours to open the box without destroying it. Instead of the expected Raiders of the Lost Ark-style swarm of face-melting demons, museum conservationist Pam Hatchfield announced that the contents were in "amazingly good condition."

Among the treasures in the box were around two dozen copper and silver coins, a silver plate personally signed by Adams and Revere, a medal featuring the likeness of George Washington, playing cards, five newspapers and state records and seals. Officials had feared that the 1855 incident might have damaged the contents, but fortunately it appears the contents were unharmed.

CNN's Jim Sciutto posted a picture of the plate, which looks pretty spiffy for something dating back over 200 years:

The coins and medal were also apparently preserved in fantastic shape:

ABC News also posted this picture of an intact if rigid-looking copy of Boston Daily extracted from the box:

It's not often that we get to open such an such old time capsule, let alone one laid by famous historical figures. Needless to say, this was a nice treat for history buffs. In any case, it's a good thing Nicolas Cage wasn't there — he has a bit of a penchant for stealing historical U.S. documents.

In the meantime, the contents of the box will be re-preserved before being put right back in there for future generations to enjoy. Officials are apparently also debating whether or not to add a modern-day item to add to the box's legacy. Considering the state of D.C. today, let's hope it's not a newspaper. Maybe a Blu-Ray copy of The Interview or something equally "American"?