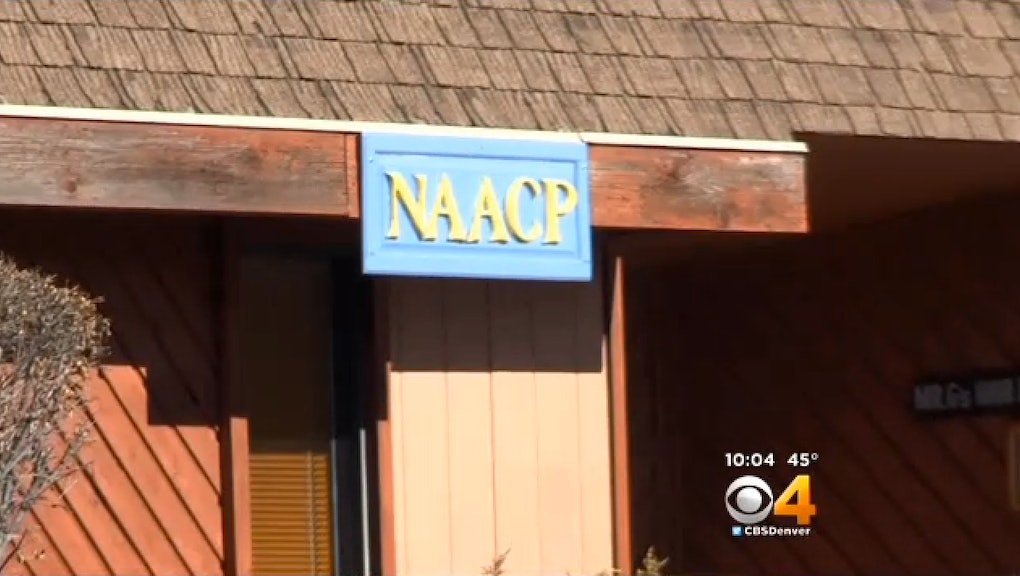 The Colorado Springs offices of the NAACP were attacked Tuesday morning in what's almost certainly an attempt to inflict fear and terror upon black Americans and those who support them.

According to reports, an improvised explosive device was detonated on the side of the NAACP's building, and the FBI confirmed that it was a deliberate attack. Officials are seeking a "person of interest," described as a balding, white male in his 40s driving an older-model pick-up truck. A container of gasoline was left near the bomb, apparently with the intent to cause an even bigger explosion, but that part of the plot failed. The result was minor damage and no casualties.

In the current context of national protests about police brutality and racial justice, the effect of such an attack can't be understated. But only after #NAACPBombing became a worldwide trending topic on Twitter did the incident start to become a national news story late Tuesday night.

This perceived lack of coverage angered many:

Even though the attack ultimately didn't have catastrophic consequences, officials said it could've been much worse and merits serious attention.

This is especially true when you look at the historical context. The terrorist tactic carried out on Tuesday morning includes unmistakable parallels to the church and home bombings routinely carried out by racists and white supremacists during the 1950s and '60s. In the process, as mentioned by ThinkProgress, vital community centers were damaged or destroyed, and dozens of black people lost their lives. Historically, these attacks have been haunting and life-threatening for black people in America.

During the past five months, several thousand protesters have engaged in marches, demonstrations and die-ins across America — rallying for racial justice at a level that hasn't been seen since the 1960s. Attacks like the one on Tuesday morning are often carried out with the intent to deter people from participating in such actions, sending the message that their efforts could cost them their lives.

They also happen during periods of high racial tension.

The last time NAACP office bombings made news was in 1993, not long after the fallout from the Rodney King verdict. The white supremacists behind the bombings were caught eventually and pleaded guilty. Today, per the Southern Poverty Law Center, more than 900 hate organizations operate nationwide, including roughly a dozen white supremacist groups in Colorado, where Tuesday's bombing took place.

And according to data from Gallup, the current level of awareness about racial issues is similar to what it was in the early 1990s. Then and now, a substantial number of Americans said that "race relations/racism" was the most important issue facing the country.

Make no mistake: Attacks like these are unacceptable and reinforce a history of anti-black racism that's meant to deter any progress made toward racial justice. As Henry Allen, the president of NAACP Colorado Springs, told CBS Denver, "Apparently, we have gotten someone's attention that we are working toward civil rights for all. That is making some people uncomfortable."

But the message he has for the suspected terrorist is an even more important one: "Regardless of the actions of others, we will continue to fight for the equality of all people," Allen stated.

And everyone should continue doing just that.