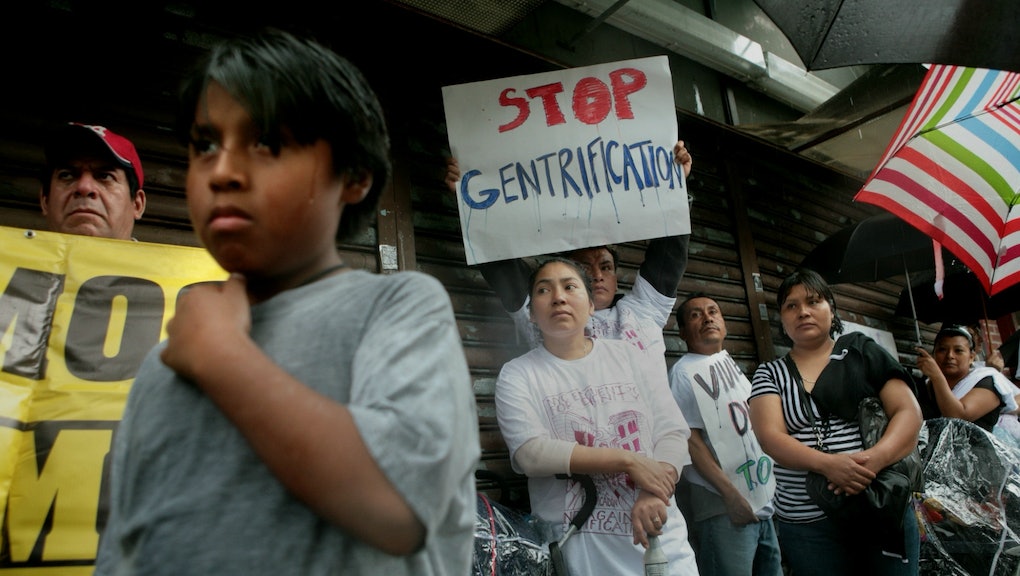 #ThingsGentrifiersDo Is the Perfect Comeback to the 'Whitening' of Urban Culture

A new Twitter hashtag is raising awareness about #ThingsGentrifiersDo. Created Tuesday by Umaara Elliott, the hashtag has received widespread media attention for highlighting the way racism and gentrification are inextricably linked.

In the original tweet, Elliott offers up a checklist (originally published by Curbed in August) meant to help people determine the extent to which a neighborhood is gentrified. Most items depict spot-on caricatures of white urban culture as it often is the "whitening" of urban culture that undergirds the phenomenon of gentrification, and therefore also the hashtag.

Gentrification is a process with racist effects. And these effects are multifaceted. The process of gentrification is not necessarily motivated by racism — it's motivated by capitalism. But the process is nevertheless different from other capitalist ventures because it "whites out" whatever is deemed undesirable or unprofitable by market forces. When businesses do roll in, so do wealthy consumers, or people with sizable discretionary spending habits. Rents spike to keep pace with their wealth, pushing the original residents out of the neighborhood.

Gentrification also happens when a neighborhood becomes populated by blissfully unaware, "colorblind" consumers. This "colorblindness" often results in overt expressions of racism, which is precisely what commentators using the hashtag have seized upon. The satire infusing these tweets reflects the ignorance and irony of the actions of white urbanites who move into and take over traditional minority neighborhoods.

Dissenters ironically highlight gentrification's racist effects: Some dissenters have used the hashtag to vocalize the benefits — primarily aesthetic, but also speaking to the increased safety of neighborhoods — of gentrification. But these rebuttals effectively miss the point of the hashtag, as well as the difference between motivation and effect.

Not only do these tweets claim that gentrification is not racially motivated, they more offensively imply a kind of white benevolence, as if the gentrified neighborhoods weren't good enough before, or as if they needed to be saved.

The blanket of whiteness resulting from gentrification has left minorities' communities without space — without homes, businesses and their culture. While not the same, #ThingsGentrifiersDo is fighting to take back some of that space online.